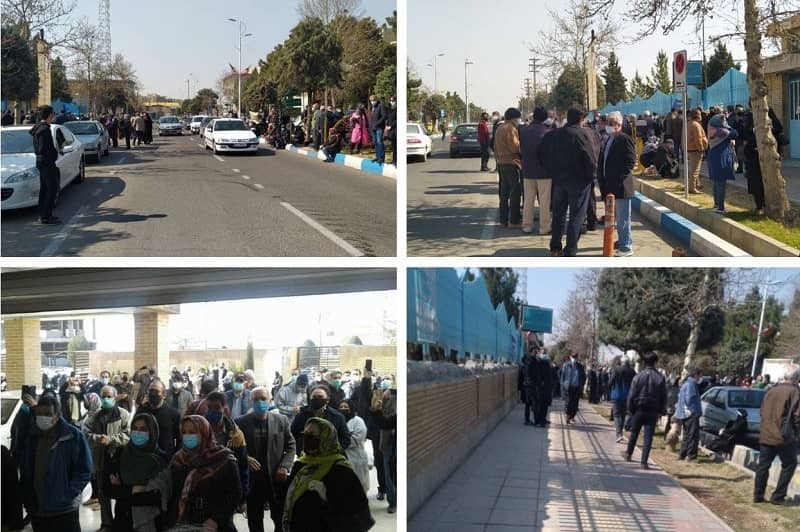 According to The National Council of Resistance of Iran (NCRI), and the People’s Mujahedin of Iran (PMOI / MEK Iran), dozens of demonstrations from all walks of life have taken place in recent days. These demonstrations, which coincide with the revolt in Sistan and Baluchestan province and the ongoing retirees’ protests, foretell that Iran’s society is on the verge of collapsing.

Contractors from the Iran Mall staged a rally in front of Ayandeh Bank’s central building in Tehran on Friday, requesting payment for unpaid claims. In the last six years, contractors of hundreds of jobs have not secured their rights from Iran Mall or Alborz Tat.

The owners of the Tehran Electricity Cooperative held a rally on Saturday to condemn the government’s recording of the cooperative’s lands auction, which was done in collaboration with the Hashtgerd Registry Office, the Hashtgerd New City Development Company, and the Savojbolagh Governor’s Office. Protesters even took to the streets to express their displeasure with the government’s decision.

A group of Mashhad Mall workers staged a demonstration in front of Ayandeh Bank in Mashhad on Sunday after not receiving their pay and benefits for four months.

Another group of Iranian farmers, peddlers, workers, and retirees gathered on Monday to discuss their subsistence and employment issues.

On Monday, Saveh Pars Tire Factory workers held a rally in the factory compound to begin their sit-in for the eighth day. “Our main demand is to solve the problem of the savings fund and have our money returned.” one of the employees said.

Contract teachers organized a protest in front of the regime’s Ministry of Education’s main building in Tehran on Tuesday, protesting the work law’s implementation and demanding the abolition of the correctional exam. They demanded their licenses as well.

Protests in recent days have coincided with a strong local revolt in southeast Iran’s Sistan and Baluchestan located in the Saravan region.

Protests erupted after the Revolutionary Guards (IRGC) opened fire on stranded fuel porters along the Iran-Pakistan border in the Saravan region, killing and injuring dozens. The presence of IRGC troops, heavy artillery, and tanks are visible in images and videos shared on social media. Angry citizens stormed IRGC bases in many towns throughout the province in response.

Since the incident, protests have spread through the province of Sistan and Baluchestan. To stop news of the strikes from circulating, the government blocked internet access. According to sources received by the MEK, security forces have shot and killed dozens of demonstrators while also arresting a large number of others.

Protests throughout Iran, their unprecedented spreading, persistence, and size, all point to the country’s unsettled state. The regime’s leaders and state-controlled media’s biggest worry is the inevitable uprising of the Iranian people.