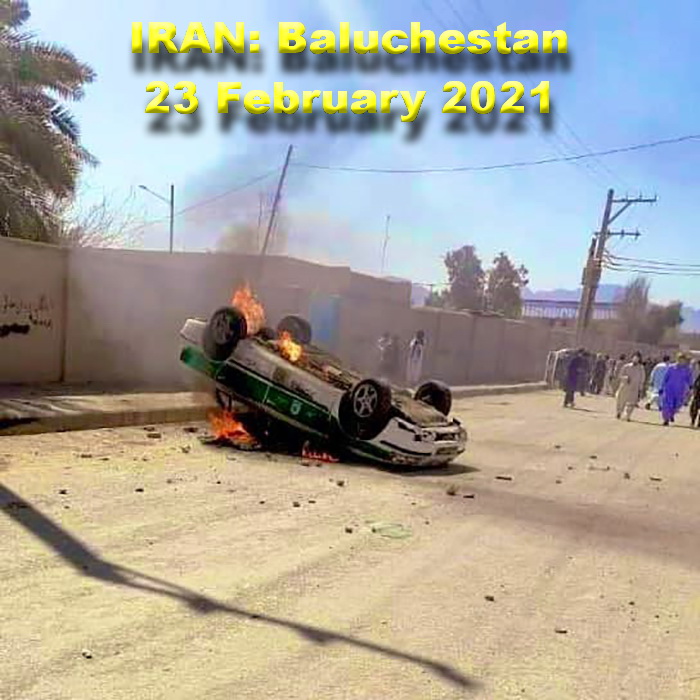 The National Council of Resistance of Iran (NCRI), and the People’s Mujahedin of Iran (PMOI / MEK Iran) reported that protests erupted in Sistan and Baluchistan province after the IRGC fired on impoverished porters, known locally as “Sokhtbar” who were just making a living transporting small quantities of fuel across the Iran / Pakistan border into Pakistan. Many of these porters were either killed or seriously injured when IRGC forces opened fire on them, apparently because of a dispute over kickbacks that the IRGC gets from the porters.

The IRGC may have bitten off more than it could chew this time around as the spark of protest just might spread across the country, proving just how volatile the country really is. Many Iranians are sick of their corrupt government that has mismanaged the economy, made an absolute mess of the response to Covid-19, and has responded with brutal violence every time ordinary Iranians show their displeasure.

The IRGC is the primary smuggling agency in the country and makes billions of dollars through illegal import and export avenues, including across the border into Pakistan. At the same time, the IRGC attempts to prevent poor Baluchi workers from making a meager living carrying mostly gasoline across Pakistan.

The city where the killings took place in Saravan. The citizenry was so irate with the violence by the IRGC that they immediately responded with their own protests despite the danger of retaliation by the IRGC. Police vehicles have been set on fire, the government building was stormed and roads have been blocked by burning tires.

As Ehsan Houshman, one of the regime’s experts on poverty has said: “Mafia gangs are formed in smuggling. Sometimes 100 trucks cross the border with an official government document. These Mafia gangs smuggle as much as 10 to 15 million liters of diesel a day.” The point that Houshman makes is that this mafia is not made up by Sokhtbar but by a highly organized IRGC smuggling racket. Houshman estimates that if the “official” smuggling was stopped by an alert and principled government, it would save Iran 12 billion dollars in currently lost revenue.

The protests in Iran represent the most serious uprising posed facing the Iranian regime since the November 2019 protests that were only stopped when 1,500 protesters were brutally killed and thousands more arrested and then imprisoned. Many of these “political prisoners” end up being executed. Reuters confirmed in a special report on December 23, 2019, about the deadly crackdown on November nationwide protests in Iran the death toll of 1500 that was announced by the People’s Mojahedin Organization of Iran (PMOI / MEK Iran) on December 15, 2019.

Protests on the scale of Saravan and other border areas are likely to get worse as the gulf between the regime and the people it is supposed to represent widens. Violent repression will never win the hearts and minds of the people of Iran who are now looking to rid their country of the whole of the parasitic regime of the mullahs.

The state-run media in Iran is quick to point out that the situation can only escalate in Iran: As the Mostaghel daily reported on Tuesday, “according to many security officials, will happen once again, and will not be comparable with the ones in January 2018 and November 2019.”

The mullahs are not just incompetent at running the economy or looking after their own people. They have no idea of how to diffuse a rapidly escalating socio-political crisis that if handled badly will sweep them into political oblivion. The porters of Sistan & Baluchistan and other border regions, such as in Kurdistan, are only trying to feed their families. When the regime orders the IRGC to shoot at them, it stinks of hypocrisy so much that the stench can be smelt from Tehran to Saravan. Spending hundreds of millions on restoring holy shrines to keep the Imams happy is not the answer.