Once again the world witnessed the Iranian peoples’ determination to achieve freedom. 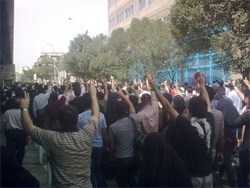 Today, the last Friday of Ramadan, known as ‘Quds Day’ in Iran, a day historically associated with Iranian extremists.  For thirty years the ruling mullahs’ regime in Iran his used this day’s Friday cermone to campaign against Israel and justify the presence of its war and terror machine throughout the Middle East.

But this time in Tehran, Tabriz, Shiraz, Isfahan, and other cities, the Quds day events took a new turn.

Today, the Iranian people marched the streets chanting that neither Israel nor Palestine is their concern but what they care about is their own country, Iran and its freedom.

From the early hours this morning large crowds of people gathered in streets in many cities of Iran defying Basijies and Revolutionary Guards forces who tried to stop them from demonstrating.

Many clashes between the crowd and security forces have been reported and some demonstrators were arrested.

The security forces were unable to control the crowed due to the large number of people present.  City buses were used to block the streets and hold those arrested.  They used tear gas, batons, and daggers against the people.  Some shooting has also been reported.

Protestors in turn set fire to trash bins and motor cycles confiscated from Basijies.  They chanted ‘death to dictator’ and called for release of all political prisoners.

An eyewitness reporting from the scene said, “You won’t believe what is going on today.” It is as if, “Everyone is in the streets today.”

Mahmoud Ahmadinejad, seemed quite nervous during an on-scene interview with Iranian state-run television.  As he was trying to show himself in control and calm as chats of anti-government demonstrators calling for him to resign could clearly be heard in the background.

The growing number of people attending anti-government demonstrations since the presidential elections last June, and also the growing dissent among the ranks of the ruling party, puts Iran’s Islamic rule at a deadlock.

The progress of events proves Khamanei and his president, Ahmadinejad, incapable of controlling the opposition movement, and it shows that the circumstances has passed the no-return point and cannot go back to the situation before the elections.

What will become of the mullah’s in Iran, remains to be seen in the coming months as more international pressures from United Nations are in the horizon if Tehran will not back down from its nuclear stance.