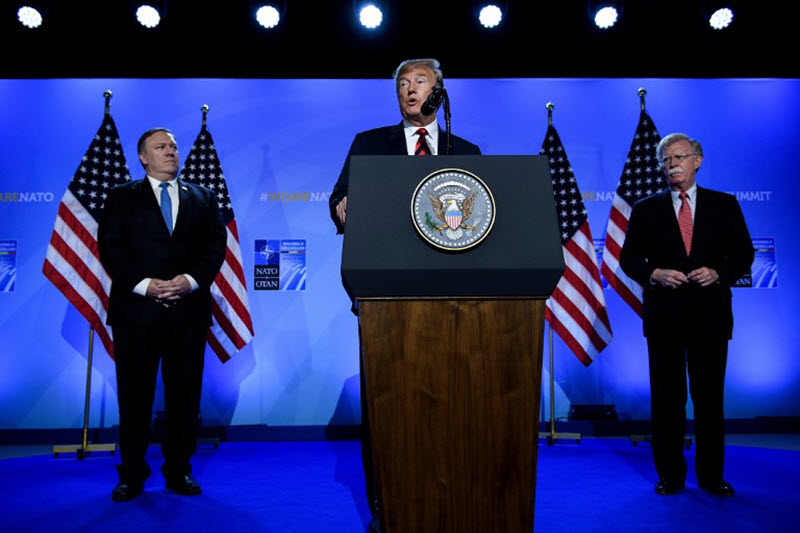 This group will monitor Iran’s compliance, or lack thereof, with Pompeo’s 12-point plan that was designed to change the behaviour of the Iranian regime.

Recently, Pompeo said: “The regime in Tehran has been responsible for a torrent of violent and destabilizing behaviour against the United States, our allies, our partners and indeed the Iranian people themselves.”

Hook, who worked for Bolton when he served as the US ambassador to the United Nations, is known for his tough stance on Iran and has been brought in to further Pompeo’s behaviour change policy.

Of course, the Iranian Regime’s mullahs, including supreme leader Ali Khamenei, will never submit to any sort of change in behaviour, but that doesn’t mean that the US will have to take part in an actually military conflict. Economic sanctions imposed by the US after its withdrawal from the 2015 nuclear will put pressure on the regime and help the people to overthrow the mullahs.

Many companies have already pulled out of business with Iran, fearful of US sanctions, which means that the Regime is already suffering, so by the time oil-related sanctions are in effect in November, the mullahs will likely be running out of time.

The people of Iran are already rising up against the dictatorship and are demanding regime change, despite a brutal crackdown by the mullahs. When the Regime’s money is cut off, nothing will stop the Iranian people and their organised resistance from defeating the mullahs and ushering in a free and democratic Iran.

Struan Stevenson, coordinator of Campaign for Iran Change and former chairman of the Friends of a Free Iran Intergroup in the European Parliament, wrote: “The mullahs have blamed the main democratic opposition movement — the People’s Mojahedin of Iran (PMOI or MEK) and the NCRI led by Maryam Rajavi — for fomenting the unrest in Iran. After years of dismissing the PMOI as an insignificant irritant, they are now terrified of Rajavi and her pledge to restore peace, freedom and democracy to Iran’s beleaguered citizens.”