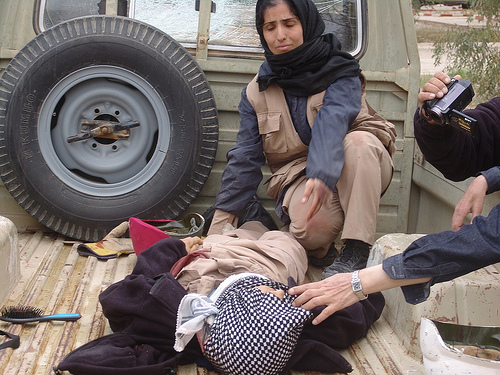 Who cares more about the safety and security of America and the United States’ national security: The American military personnel who have served their country on the frontlines in Iraq or the pro-Tehran lobby in Washington with well-established political and financial ties to Iran’s leadership and its UN Mission in New York?

Secretary of State Hillary Clinton will soon be making a momentous decision about the removal of the Iranian opposition, Mujahedin-e Khalq (MEK), from the State Department’s list of Foreign Terrorist Organizations (FTO). But has she taken note of what many American military officers, who have dealt with the group in person, sometimes for months, say about the MEK?

Captain Vivian Gembara, an attorney for the U.S. military for 4 years, was deployed in Iraq for 12 months beginning in April 2003. During that time, she participated in negotiations with the MEK. She was a member of the 4th Infantry Division team that negotiated and drafted the “voluntary consolidation” agreement between the United States and the MEK. In a 2005 article, she writes that the U.S. Special Forces were first to encounter the MEK in April 2003 when the MEK “offered to work alongside the U.S. to stabilize the country.”

Describing the MEK as a resistance movement which aims “to overthrow Iran’s current Islamic fundamentalist regime and replace it with a democratic government,” Captain Gembara, expressed regret about the missed opportunity of partnership with the MEK as a result of Washington’s reluctance to work with a group which was designated as a FTO. “Classified as a terrorist organization by the State Department in 1997, the [MEK] bears the burden of an outdated and inaccurate label,” she wrote.

Captain Gambara writes that, instead of establishing a partnership with the MEK, “Led by General Ray Odierno, 4th Infantry Division Commander, we were tasked with delivering the bad news. The [MEK] we encountered [in Camp Ashraf] were just as the Special Forces described – fluent in English, Arabic and Farsi; familiar with the terrain and eager to work with us. Meetings that we anticipated would run several hours wound up lasting two days.”

Elaborating on the substance of these negotiations, General Odierno told reporters at the sidelines of the meeting hall at Camp Ashraf that “It is not a surrender. It is an agreement to disarm and consolidate.”  He added that the MEK appeared to be committed to democracy in Iran and their cooperation with the United States should prompt a review of their “terrorist” status, according to news reports.

Elaborating on the substance of these negotiations, General Odierno told reporters at the sidelines of the meeting hall at Camp Ashraf that “It is not a surrender. It is an agreement to disarm and consolidate.”  He added that the MEK appeared to be committed to democracy in Iran and their cooperation with the United States should prompt a review of their “terrorist” status, according to news reports.

“There were no findings of any terrorist activities, disloyalty to the mission of the U.S. military in Iraq, illegal activities, coercion of MEK members, hidden arms, or any evidence that the MEK were not fulfilling their agreement with the U.S. Military to fully cooperate with and support the goals of the U.S. in Iraq…”

Noting that “US and Mujahedeen troops have mingled cordially during the discussions here over the past two days,” the French news agency, AFP, quoted General Odeirno as saying “I would say that any organization that has given up their equipment to the Coalition clearly is cooperating with us, and I believe that should lead to a review of whether they are still a terrorist organization or not.”

Similarly, General James Conway, former Commandant of the Marine Corps, spoke on a panel last month about the MEK and Camp Ashraf based on his “own observations and experiences” and as “the only member of the panel that has had physical responsibilities for their security.”  He told the audience that:

“As I dispatched some of my commanders to sit down and talk with these folks, as I visited myself, these people are not terrorists. They’re no more terrorists than the people here on the panel… We asked those people to disarm. They’re the only people in Iraq who are disarmed. And yet, these people complied willingly and have done what we asked them to do.”

Speaking at a Congressional briefing in May 2005, Lt. Colonel Thomas Cantwell, Commander of 324th MP Battalion, who for nearly a year was the officer in charge of Camp Ashraf where 3,400 MEK members reside, talked about invaluable role the MEK played as a honest broker between the US commanders and the local Iraqis. Col. Cantwell said:

“When I moved up into northern Diyala province [in Iraq], the relationship of the MEK with the local community helped me in that regard, I think because most of the local sheiks, understanding as part of the Sunni triangle, weren’t exactly trusting of coalition forces but they seemed to have some level of trust with the Mojahedin…”

Also in May 2005, Col. David Phillips “Griffin-6”, the 89th Military Police Brigade, wrote an open letter to Kenneth Roth, Executive Director of Human Rights Watch which had leveled malicious and completely unfounded allegations about human rights violations in Camp Ashraf. In the letter which was subsequently sent to the members of US Congress and later published in the Congressional Record, Col. Philips stated that:

“I am the commander of the 89th Military Police Brigade and in that role was responsible for the safety and security of Camp Ashraf from January – December 2004… We always had open dialog and debated different subjects. I was exceptionally impressed with the dedication of the female units. These units were professional and displayed strong support for freedom, democracy and equality for women… Were it not for the ongoing insurgency throughout Iraq, I would sanction my daughter to travel to Camp Ashraf and meet these very dedicated and professional female members of the [MEK]…”

“The [MEK] has always warned against the Iranian Regime’s meddling and played a positive and effective role in exposing the threats and danger of such interventions; their intelligence has been very helpful in this regard and in some circumstance has helped save the lives of soldiers. Recommend that the facilitation of intelligence continue.”

Few days after the July 2009 deadly attack by the Iraqi forces on MEK members in Camp Ashraf, Warren Murphy from the Indiana National Guard’s 76th Brigade, wrote in the Indianapolis Star newspaper that:

“I also went on several missions to Ashraf and found the people there cooperative and friendly toward us. We should be helping these folks in every way necessary. Repayment for the help they have given us is the least of the reasons to do so. Rescuing them from oppression under the Iraqi government or certain execution if repatriated to Iran is the only action that has a shade of right, and it is easily within our ability to do so.”

Col. Wesley Martin US Army (Ret.) wrote in the New York Post earlier this month that “As a former base commander of Camp Ashraf, the official name of the MEK’s besieged refuge, I’d like to make one thing clear: Despite charges that the MEK is a terrorist organization, these people are American allies. It would be foolish, as well as wrong, to abandon them… As the former antiterrorism/force protection officer for all of Iraq, I know the ‘factual’ basis for the listing is false.”

Last month, Col. Martin told a Congressional hearing entitled “Massacre at Camp Ashraf: Implications for U.S. Policy,” that “I know from experience, the [MEK] is not a terrorist organization. My recommendation in this effort is for the People’s Mojahedin to be immediately removed from the State Department terrorist list.”

Col. Gary Morsch, who had served as the Battalion Surgeon at Camp Ashraf for nearly a year in Camp Ashraf, told the same hearing that:

“There were no findings of any terrorist activities, disloyalty to the mission of the U.S. military in Iraq, illegal activities, coercion of MEK members, hidden arms, or any evidence that the MEK were not fulfilling their agreement with the U.S. Military to fully cooperate with and support the goals of the U.S. in Iraq…”

Dr. Morsch testified that MEK members in Camp Ashraf were highly educated and “had come to Ashraf to voluntarily serve with the MEK to establish a free and democratic Iran.”

“Now, it seems to me the oppressive events [at Camp Ashraf] are such today that we have got to reconsider our national posture towards the people at Camp Ashraf and the MEK in general.”

What all these US officers have said on the record about the MEK, spanning a period of eight years, amounts to description of a pro-democracy, stability-seeking ally, not a terrorist entity or a threat to US national security. These statements make it very clear that the MEK’s FTO designation is flawed. The designation has been and continues to be a political act and an incentive to placate Tehran rulers based on some misguided policy consideration and assumptions.

As the anti-MEK crowd, spearheaded by the US-based Tehran lobbies, are ferociously lobbying the State Department to – despite what the law and facts dictate – refrain from revoking the MEK’s “terrorist” tag, Sec. Clinton is wise to listen to the advise of these American soldiers who have come to know the MEK first hand and are concerned about America’s safety and security like no other.