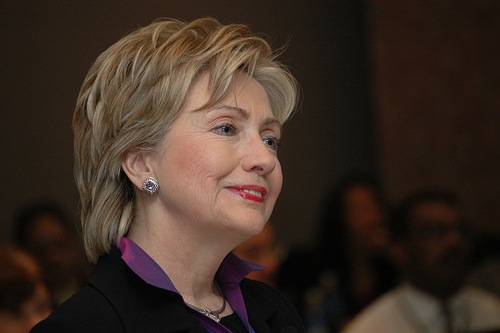 Nima Sharif
Dear Secretary Clinton, Already enough people – our loved ones— have died.  The Traumatic consequences of keeping MEK on the list are unimaginable.  It will especially cost the lives of many more innocent men and women and children residing in Camp Ashraf.  Don’t allow another massacre to happen.  Delist MEK.

The supporters of MEK and Iranian-American families of residents of Camp Ashraf have organized a demonstration on Friday August 26, 2011 in front of the State Department in Washington to once again present their case and plea for removal of the Iranian opposition from the U.S. terror list.

Last June tens of thousands of Iranians gathered in Paris to express their love and support for Iran’s main opposition movement, the Mujahedin-e Khalq or MEK.  At the gathering many American high profile personalities and a large bipartisan delegation attended to express solidarity.

Secretary Clinton, the United State along with the rest of democratic world came to aid of the Libyan people when Gaddafi started his inhuman clampdown on them.  That is of course commendable.

And when it comes to Syria, Madam Clinton, you have personally and repeatedly sided with the brave people in that country who demonstrate in the streets and sacrifice everything to achieve freedom.  I’m sure Syrians along with the rest of the free thinking people in the world appreciate your support.

But when it comes to Iran, after seeing how the Iranian people were oppressed by tyrants and fascists back in 2009 and 2010, why would you want to keep their main opposition movement in chains? Why not allow the potential that is within Iran to flourish and stand against the real terrorist of the world and the big oppressor of not only Iran but also Syria, Iraq and the reset of Middle East?  Why delays in delisting the MEK?

Instead of standing beside the Iranian people by recognizing and supporting their organized opposition movement, for many years, the United States has done the opposite.  Secretary Clinton, it is time to turn that around.

How can anyone imagine what could have been the outcome if the free world did not support the Libyan people in their fight against Gaddafi?  Would the victory that we bear witness to nowadays take place?  What if the free world had decided not support the Libyan resistance and instead put them on their terror list.  I think the result would have been devastating for Libya and freedom as a whole and the United States.

It was the uprising of the Iranian young who took to the streets of Tehran after the stolen election of 2009 that inspired the whole world. It reminded us all of our own fortune and values of democracy and freedom; values that made us to be who we are.

Then after the crackdown in Iran by the mullahs, there came the Arab Spring.  Look at Syria.  How can we not admire the bravery?  How can we stop wondering about how will freedom come about to Syria and when will the killings end?  When will the Syrian’s attain the freedom they yearn for?

And Libya and its people who stood up for their rights and the world stood with them and along their side and at last the tyrant fell.  I cannot help admiring the barefooted soldiers of the Libyan Liberation Army with their torn and rundown attire who so bravely fought for freedom.

But we must realize that the struggles of Iranians continue as well.  It may have changed forms but it hasn’t died.  How can tyrants kill a whole people?  Dictators may be able to oppress them on one side but dissent will definitely break open from another side.  That is something we can be sure of. It is an intrinsic feature of a living nation.

The Iranian uprising is alive and well.  It’s just in a different state.  It is in Washington on Friday August 26, calling on Secretary Clinton to delist MEK.