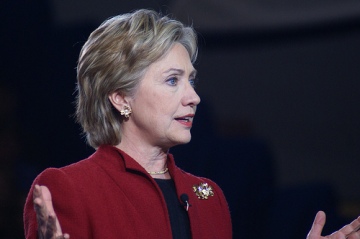 Secretary of State Hillary Clinton is reportedly close to announcing her decision to whether or not remove Iran’s major opposition, the Mujahedin-e Khalq (MEK) from the Department’s list of terrorist organizations. The law says this decision must be based on the anti-Terrorism Statute not politics or policy considerations. The US Congress and field experts agree and call for ending the designation.

Her predecessor’s 1997 decision to blacklist the group was definitely a political one and a total disregard of relevant laws. The move by Madeline Albright, the then Secretary of State, was carefully crafted to send a definitive and meaningful welcome-to-office present to the newly-elected president of Iran, Mohammad Khatami, the darling of the phantom “reform” movement crowd in Western capitals.

The other component of this welcome package was the White House intervention to prevent the release of the FBI’s investigations which showed Iran was the main culprit in the 1996 Khobar tower bombing in Saudi Arabia which killed 19 American servicemen. Not a bad package for the first day in office.

In 2006, the Wall Street Journal removed any ambiguity about the nature of Madeline Albright’s decision, noting that “In 1997, the State Department added the MEK to a list of global terrorist organizations as ‘a signal’ of the U.S.’s desire for rapprochement with Tehran’s reformists, says Martin Indyk, who at the time was assistant secretary of state for Near East Affairs. President Khatami’s government ‘considered it a pretty big deal,’ Mr. Indyk says.”

Few days later after the 1997 designation, the New York Times columnist Thomas Freidman, re-emphasized the importance of the MEK blacklisting gesture for Tehran. “The U.S. press missed it, but the Iranians won’t…The Iranians will get the point: We’ve just made it illegal for Americans to support the [MEK] — a group dedicated to overthrowing the Iranian Government.”

The debate about the de-designation of the group has again flared up with the US Congress, field experts, national security figures, and legal experts calling on the Secretary Clinton to de-list the MEK, on one side, and the Washington-based Tehran lobby and their network of reporters and bloggers, on the other. A potentially healthy debate about war on terrorism and the Rule of law has, regrettably, turned into an anti-delisting campaign to demonize the MEK.

Glancing over commentaries by this desperate anti-MEK crowd – popping up like mushrooms on a rainy day as “MEK experts” – shows they clearly suffer from acute case of ignorance about America’s terrorism laws, requirements, and definitions. They are masters of copy-pasting and regurgitation, but they lack basic skill in unbiased and objective research into the case laws and court record and experts’ views.  Maybe they do but “can’t handle the truth.”

So, what is the truth about the MEK? Is this group concerned in terrorism? Does it qualify the statuary requirements to be designated as one? Renowned subject matter experts say: No. Let’s see what they say:

Rudi Giuliani, Former Mayor of New York, New York: “I have investigated terrorism and I have seen first hand, in my city the devastation that terrorism can bring about. [MEK] is not a terrorist organization. This is an organization dedicated to achieving freedom and dignity for its people.”

Louis Freeh, Former Director of the FBI, U.S. District Judge: “With respect to the designation of the MEK… I was not consulted in 1997, when the Department of State had listed the MEK… In 1997, the government of Iran duped the U.S. government by inducing it to list the MEK as a foreign terrorist organization, without consulting the FBI… The delisting has to immediately take place.”

Michael Mukasey, Former Attorney General of the United States: “There was simply no basis in law or in fact for continuing MEK on the State Department’s list of foreign terrorist.”

Ambassador Dell Dailey, State Department’s Coordinator For Counterterrorism in 2008, Congressional Hearing: “If you take a snapshot [of MEK’s record] back five years, it appears to be somewhat clean. So we are doing a professional effort to review them.”

Ambassador Dell Dailey, Former Coordinator for Counterterrorism, Department of State, 2011: “It is essential that Secretary Clinton . . . revoke the designation and delist the MEK. It is within her ability to do that right now… Delist the MEK from the foreign terror organization list and let the Iranian citizens decide their own form of government.”

Richard R. Schoeberl, former Federal Bureau of Investigation (FBI) executive with leadership responsibilities at FBI Headquarters and the National Counterterrorism Center: “Based on my experience as a Unit Chief in the Counterterrorism Division of the Federal Bureau of Investigation, there are ample grounds to conclude that the MEK should be removed from the FTO list.”

Terry Arnold, Former Deputy Director of the State Department’s Office of Counter-Terrorism and Emergency Planning: “Under the law, the group no longer qualifies as an FTO, because the circumstances that led to its previous listing have sufficiently changed as to merit removal.”

Prof. Yonah Alexander, Director of Int’l. Center for Terrorism: “[MEK] repudiated violence, ceased all military operations, and voluntarily surrendered its weapons. These actions were substantiated by U.S. intelligence and military bodies…It is amply clear that there is no factual basis for retaining the current FTO status of the [MEK].

Dr. Patrick Clawson, Deputy Director for Research of Washington Institute for Near East Policy: “The State Department’s Country Reports on Terrorism contain numerous non-terrorist allegations against [MEK] without offering any indication that the group continues to engage in terrorism.”

Dr. Walid Phares, Director of Future Terrorism at the Foundation for the Defense of Democracies: “Tehran’s regime, designated as Terrorist by Washington, considers the MEK as terrorist. This puzzling situation is due to the fact that pro-Iranian pressure groups consider the Mujahidin Khalq [MEK] as a real threat to the regime and thus put significant pressures internationally to keep the designation of the MEK as is.”

There you have it; the views of experts, the real terrorism and national security experts, not of those who just jumped on the anti-MEK band wagon of Tehran lobby, driven by the notorious mullah Heydar Moslehi, head of Iran’s feared Ministry of Intelligence and Security.

In 1997, Madeline Albright disgraced herself  by giving in to pressure coming from Tehran’s tyrant rulers and their US-based advocates, and designated the MEK as a terrorist group. Fourteen years later, Secretary Clinton must refrain from yielding to similar pressure from the same bunch. She must de-list. It would be a huge disgrace if she ignores the massive volume of experts’ views, Congressional resolutions, and the court findings and maintain the stigma of terrorism on the MEK.