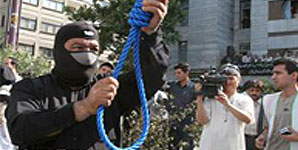 A new report from by the U.S. Commission on International Religious Freedom on imprisonment and persecution of Christians, Baha’is, Jews and minority Sunni Muslims has made key lawmakers to call for new human rights sanctions targeting Iran’s clerical regime and has urged President Obama whose administration is undergoing negotiations with Tehran to spearhead this step.

“If the Obama Administration wants to be serious about holding Iran accountable, it should be working with Congress to reinforce and expand sanctions that target Iran’s ongoing and egregious violations of religious freedom and human rights,” Sen. Mark Kirk, R-Ill., told FoxNews.com. “But it’s not.”

The evidence of persecution is clear as daylight even though Iranian foreign minister Javad Zarif recently insisted that “we don’t jail people for their opinions.”

According to a USCIRF report, “Since President Hassan Rouhani assumed office in August 2013. The number of individuals from religious minority communities who are in prison because of their beliefs has increased.”

Rouhani famously made a pledge to the Iranian people in 2013 that “All ethnicities, all religions, even religious minorities must feel justice. Long live citizenship rights!”

The religious freedom commission study documented that “as of February 2015, approximately 90 Christians were either in prison, detained, or awaiting trial because of their religious beliefs and activities.”

Iranian authorities have invaded many church services, and targeted Evangelical converts to Christianity aggressively. An example is the case of the imprisoned Iranian born American pastor Saeed Abedini who was convicted in 2013 of “threatening the national security of Iran” for practicing his Christian faith as part of the house Church movement. He was later on sentenced to an eight year prison term.

“While in Evin Prison since September 2012, Pastor Abedini spent several weeks in solitary confinement and was physically and psychologically abused,” the report said. “In November 2013, he was transferred to the Rajai ShahrPrison, which is known for its harsh and unsanitary conditions.”

The report noted that, “In March 2014, prison authorities beat Pastor Abedini after which he was hospitalized for nearly two months to receive treatment for the injuries sustained from the beatings. In May 2014, Pastor Abedini was beaten a second time when he was released from the hospital and returned to prison.”

“I’ve always believed that we should hold the Iranian regime responsible for their human rights abuses, including its religious intolerance, and the Administration should use every tool at its disposal to target, expose, and punish those who violate the human rights of the Iranian people,” Rep. Eliot Engel, D-N.Y., the ranking member on the House foreign affairs committee, told FoxNews.com.