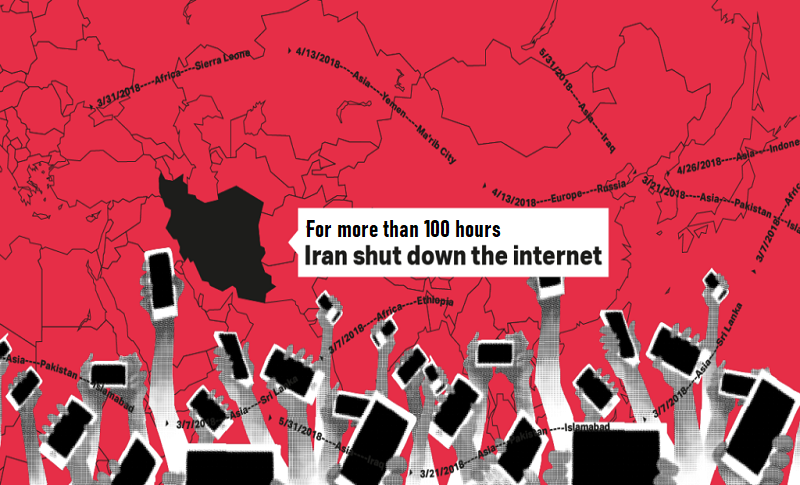 Following the anti-government protests, spread to more than 140 cities across Iran, the Iranian regime and its security officials shut down internet access as part of its bloody crackdown. A repeated decision executed for the first time during post-election protests in 2009.

In 2009 people were able to organize many protests through Facebook and SMS in Tehran and various cities which led to a quick internet shutdown by the regime.

The most important parameter for the regime was its security and suppression of the protesters. In this regard, all the governmental bodies acted in harmony with each other.

During the December protests of 2017, it was the cloud-based instant messaging service Telegram that was widely used by protesters. The latest events of the protests were regularly circulated via telegram and broadcast abroad. This led again to the internet shutdown and filtering of Telegram by the security institutions in Iran.

The scope and depth of people’s anger and protest against the regime cannot be controlled amid the Internet shutdown. The Iranian regime is trying to prevent protesters to organize and sending movies and photos to the press and other news sources abroad in a short time.

Mohammad Javad Azari Jahromi Minister of Communications of the Iranian regime emphasized in a radio interview about the internet shutdown:

“The internet has not been disrupted, but service providers were instructed to cut it off by the National Security Council and the necessary follow-up has been underway since yesterday to normalize the situation and allow for companies to re-establish the internet.”

Update: It has been 75 hours since #Iran introduced a near-total internet shutdown leaving Iranians isolated from the rest of the world ?

Iran Internet shutdown is, in fact, a new kind of hostage-taking, and this time all the Iranian people are the subject.

Importantly, Internet shutdown has had devastating consequences. It’s devastating economic and social impacts must go hand in hand with its negative political effects.

These days the regime is facing a serious security-political challenge.

It is clear that the regime is afraid of continuing and progressing of protests otherwise it would not take the risk to shut down the internet.