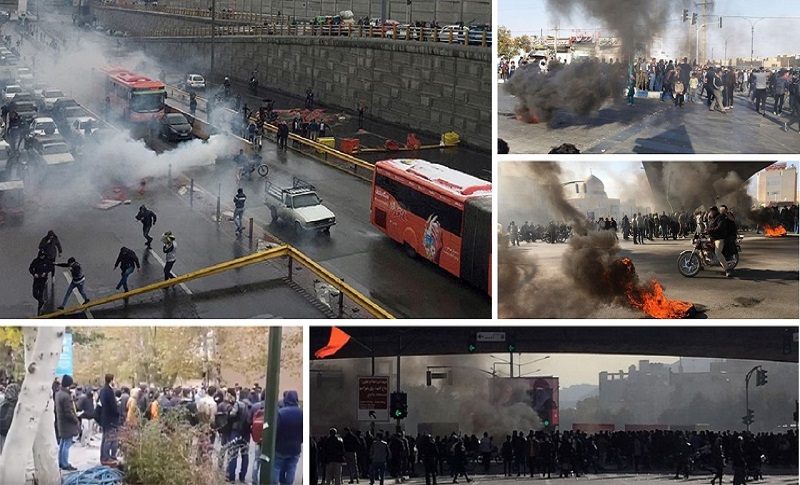 Iran is at a historic juncture. Two years have passed since Hassan Rouhani’s Second term as President and the Iranian community is mired in unresolved crises. Increased dissatisfaction with the regime’s inadequacy to provide daily needs, inflation, unemployment, high volumes of liquidity, structural corruption, devaluation of the national currency, and the plundering of billions of dollars of oil sales have created major social-economic problems.

Although the increasing sanctions and designation of the Revolutionary Guards (IRGC) and regime’s supreme leader Ali Khamenei have played a vital role in regime’s endless crisis, but it should not be forgotten that the Iranian people that rose up against mullahs dictatorship have the last words in the streets of Iran today.

Since Friday November 15 that people that the protests broke out in Iran after the announcement of an increase in fuel prices until now, more than 150 cities witnessed massive protests in response.

For a sixth straight day in Iran, protesters are chanting “Death to the dictator,” “Death to Khamenei,” and “Death to Rouhani.” The regime has killed at least 200 protesters. Iranian opposition leader Maryam Rajavi has urged all Iranians to rise in support of the protesters.

The flip side of the coin of the popular uprisings is the clear end of illusion of the so-called reformists in Iran. After Khamenei ordered the suppressive forces to open fire to defenseless protesters who have taken to the streets these days, it can be clearly said that the regime has no capacity to reform and must respond with bullets.

On the other hand, there is an end to the illusion of regime’s stability and power. If we take a look at the regime’s press in last year, we will find that the IRGC and the security forces have been working hard to present a clear image of Intelligence and security pillars of the regime. But the recent uprising has eroded the illusion.

The IRGC’s and the Army statements in the last few days have been a great surprise. The reason? The collapse and defection of the repressive forces and is so serious that raised concern among the army leaders. The Army statement emphasized that “vigilance and enhanced readiness to confront any conspiracy to threaten the security of the borders of Islamic Iran.” This indicates IRGC’s lack of control over its borders and its repressive forces to contain the crisis within the cities.

It is noteworthy that the security forces were surprised at the recent uprising and the recent unprecedented massacres and repression that they have committed, showed that they did not have a thorough assessment of the affairs.

“The crucial point is that intelligence and security devices have been weak in this case. It was expected that the security institutions would identify suspicious elements of the protests. The country always has to be clean of such organized elements.”

The regime is trying to make a duplicity by calling “protest” being “agitation”. For this reason, the regime labeling protesters as foreign puppets or elements.

The pivotal point, is the ability and power of Iran’s main opposition movement the People’s Mojahedin Organization of Iran (PMOI/MEK) to organize the protests.

On many occasions, the Iranian regime has tried to either ignore or disregard the role of the MEK, but this time all the regime’s officials and its suppressive organs and press failed to not point out the MEK role in protests.

Abdullah Ganji, editor-in-chief of the Revolutionary Guards ‘youth newspaper Javan, summed up the recent uprising in “The Properties of a Turbulent” and wrote in its twelfth axiom: “It was a special was defined for women. The women played a major role in attacks against Basij centers. It was a MEK style act.

On Tuesday the commander of the police, Hussein Ashtari, stated that “our investigations indicate that the organizations like the MEK are behind these protests. The security and law enforcement agencies of the country will identify these people and they will pay for their actions in due time.”

However, the impasse of the Iranian regime is, above all, the signal of Khamenei’s impasse. Khamenei is in a difficult phase and although he always tries to disregard the responsibilities and consequences of his decisions, he has to prepare himself for a major confrontation with the more protesters than recent days.

“In the hospital where I work, they brought 56 dead bodies last night… Please, send this message to the world. The Iranian regime’s thugs poured into the streets with pistols and started shooting at people. They aimed straight for the head and shot the people from behind. The ambulance drivers and medical staff said that none of the bullet wounds were in the torso or legs—only the head,” said a MEK supporter in an email sent on Monday night, amid a three-day internet blackout across the country. According to this MEK supporter, in Shariar alone, more than 70 people were killed on Sunday.

Another Iranian citizen who reached out to the MEK said that in Shiraz, security forces stormed a hospital and took away all the dead bodies of protesters that had been brought in. The security forces also took away all injured to undisclosed locations. Since the Iranian regime cut off access to internet, there’s very little access to what is happening inside Iran.

Mrs. Maryam Rajavi, the president-elect of the National Council of Resistance of Iran (NCRI), called on the international community to hold the regime to account for its ongoing crimes against the people of Iran, who have risen to retake their country from a 40-year old tyranny.

In light of the growing numbers of people killed and wounded across #Iran, I urge the UN Secretary General to call for an emergency meeting of the UN Security Council to brief them about the crimes of Khamenei and his Revolutionary Guards (IRGC) in Tehran. #Iranprotests pic.twitter.com/qW28xyH9qD