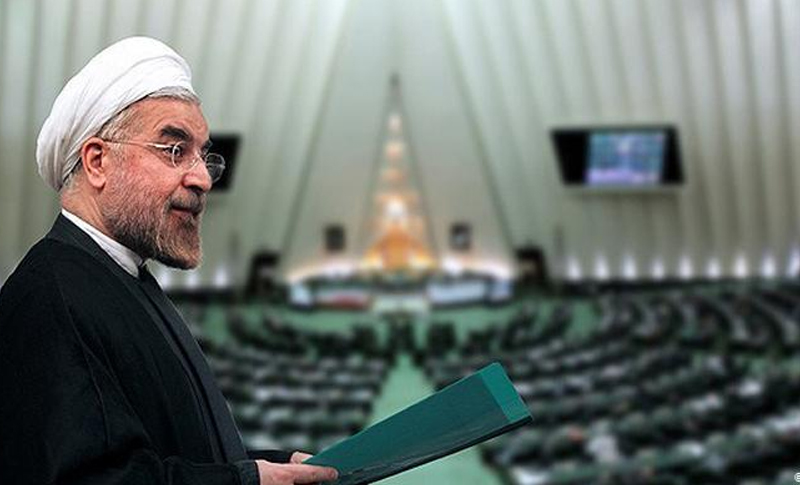 After the bloody crackdown of the November 2019 nationwide protests in Iran, the regime is facing an obstacle in the upcoming February “Legislative Elections”. A wave of popular dissatisfaction, parallel to social and economic deadlock, has engulfed the country.

However, the so-called reformist cabinet of Iranian regime President Hassan Rouhani is responsible for the crackdown of recent protests that led to the killing of more than 1,500 innocent protesters. Furthermore, after the November protests an already intensive power struggle withing the regime has increased. The regime needs to be more contractionary to be able to stand firm against international and domestic pressures. Therefore, the ruling faction is eliminating the so-called reformists side prior to these upcoming Majlis (parliament) election.

Some facts below illustrate this reality.

The regime’s authority, especially the so-called reformists, who played a key role in Rouhani’s victory to become president, are united in calling on the Iranian people to participate conditionally, or even not to participate. However, some “reformists” leaders are calling for active participation and mobilization in these elections. However, significant disqualification of some candidates by the Guardian Council has resulted in no elections list to this day.

Ali Asghar Ahmadi, secretary general of the “Solidarity Party” recently said: “Our parties, if they gather, they are not even able to elect a village owner because they don’t have any influence. In the 2007 election, I was disqualified while I was deputy interior minister until the year before. Why is there no national dialogue taking place now? The enemy can misuse the created divisions but if we stay united the enemy can not have any impact.”

Abdollah Naseri, a member of the advisory council for former regime president Mohammad Khatami, said, “I witnessed that some veteran reformists were ready to participate in elections before the November protests. However, after what happened and the social crisis across the country, they are no longer willing to participate. They believe that the parliament has lost its credibility.”

Its clear that the situation in Iran is on brink of a revolution. With the upcoming election, the regime is jumping from a frying pan into the fire and regime leaders are very worried.

Former mayor of Tehran Mohammad Bagher Ghalibaf, who is a candidate in the upcoming election, spoke about the recent protests. “The characteristics of the November protests were different in comparison to all past events. On one hand, we have witnessed a tense and violent atmosphere. On the other hand, there were legitime demands voiced by the people. We can not say that the November protests were exactly similar to those in the 1980s and battles with the Monafeqin, (referring to the main opposition the MEK).”

Referring to the role of the People’s Mojahedin Organization of Iran (PMOI/MEK) in the recent November protests shows the regime’s fear. And this election will be held under the shadow of many concerns. There is also a possibility of another uprising until that time. However, one should know that no party or side within the regime will be the winner of these elections.

The regime’s concerns are so severe that they even considered impeaching Rouhani or demanding his resignation. The regime fears more protests and is going the distance to keep Rouhani at his post until the end of his tenure.

Majlis member Mohammad Javad Abtahi from the “hardliners” segment said, “With what is going on in Lebanon, Syria and Iraq, and also the sanctions imposed against us, impeaching Rouhani is not in our national interests. This will inflame the situation and in this vacuum of power unrests will rise again. This is what our enemies want. Rouhani should change his cabinet and end the remaining two years of his tenure as president.”

These remarks show that the November 2019 nationwide protests delivered a massive blow to the entire legitimacy of the Islamic Republic regime. The mullahs are facing an accelerated process of being overthrown.