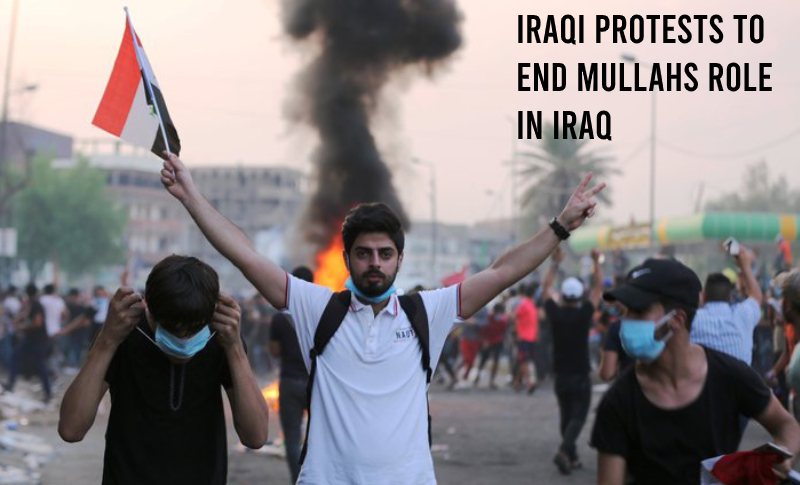 The situation in Iraq has been the main concern of the mullahs in Iran for nearly two months. After the popular uprisings in October, Quds Force commander Qassim Suleimani tried in every way to prevent the spread of the crisis and weakening of the incompetent and corrupt government of Iraqi Prime Minister Adel Abdul Mahdi.

Iraqi protesters remained in the streets every day and every night, chanting slogans against the Islamic Republic and demonstrating that they deserve real prosperity and development. This, of course, came at a huge cost. The suppression and killing of Iraqi protesters was on the agenda of the Quds Force and terrorist cells of the Quds Force, and many efforts have been made by the Quds Force to divert Iraqi popular demonstrations and demands. However, the brave Iraqi people are pressing for their demands and fighting to end Iran’s hegemony on the streets of their country.

The protesters are advancing

On Tuesday night, Iraqi media reported three explosions south of Baghdad that killed six people. A security source in Iraq said two explosions were caused by a motorcycle bomb and a third was due to an explosive package.

The events in Baghdad continue while the southern provinces witness streets and bridges blocked.

In Babel, demonstrators closed the bridge at al-Thurah in the center of al-Hilla, as well as a number of official offices, colleges, schools and main streets in Najaf province.

In Karbala, more than 35 demonstrators and security forces were injured in clashes in al-Baladiyah neighborhood. Iraqi protesters are trying to dominate key areas in the city.

In addition, a local government headquarters was set on fire in Nasiriyah province. Protesters in Dhi Qar province shut down the bridge. According to the Al-Miyadin reporter protesters closed the offices and went to the central bank, and set fire to tires around it.

Also, for the third consecutive day, Iraqi protesters blocked all major routes leading to the center of Basra province. According to media reports, demonstrators blocked roads leading to the port of Um Qasr and the fertilizer plant and storage and export tank in the city of Khor.

The wave of unrest and clashes between protesters and Iraqi security forces coincided with the visit of US Army Chief of Staff Mark Millie to Iraq, who arrived in Iraq last night.

This is General Mark Millie’s first visit to the Middle East since his appointment as Joint Chief of Staff. Probably the chief concern of the high-ranking military official is the interference of the Iran-backed Popular Mobilization Forces in the affairs of the army and security assessment of Iraq.

Earlier, Vice President Mike Pence arrived in Iraq on an undisclosed trip. In fact, according to observers, Pence traveled to the base of Ain al-Assad and insisted on not meeting with Iraqi officials to convey the message to the Iraqi people that he is with the them during the recent developments.

The direct entry of Pence to the base of Ain al-Assad, his subsequent trip to Erbil and his refusal to meet with Iraqi officials was a warning. Some even spoke on the terms of Mike Pence’s visit to Iraqi Prime Minister Adel Abdul Mahdi. Mr Pence is said to have sent a message to the prime minister that he has to dissolve his ties with Mobilization Forces and with Iran.

In addition to demands of Mike Pence to Abdul Mahdi about Mobilization Forces and Iran, the Trump deputy also urged Iraqi Kurdish officials to end ties with Iran. This suggests that the US government no longer wants to see the Iranian regime’s continued control of Iraq and with regard to presence of Iraqi protesters in the street the top priority for politicians is to end the role of mullahs in Iraq.