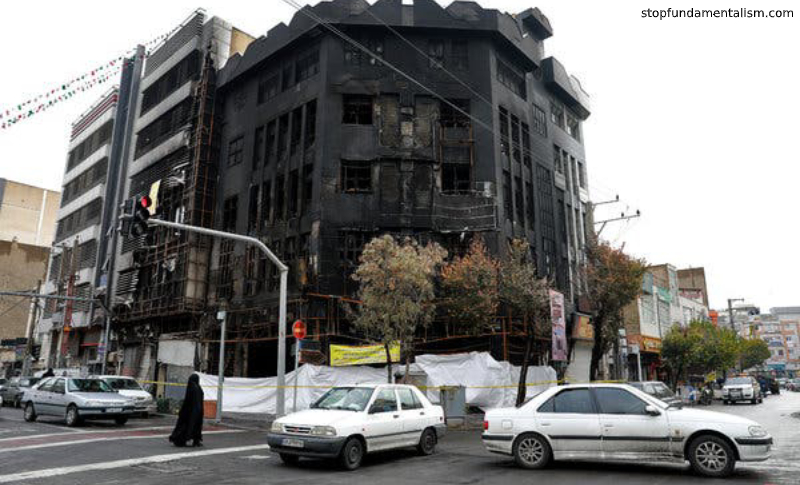 The 40 years of bloody history of the Islamic Republic of Iran can be contemplated in every respect, from the violence and executions of the 1980s until the recent uprising. However, the regime has made great efforts to portray young protesters as thugs.

The leader of the National Council of Resistance of Iran, Mr. Massoud Rajavi, said in his recent message: “Now let the regime and its allies do whatever they want to accuse the MEK and the Iranian Resistance and its rebellious and Ashrafi youth of violence and sing us a ‘non-violent’ song.”

Mr. Rajavi’s reference is to allegations made by the security forces against the protesters, accusing the people and youth of being violent and riotous.

Georgetown University criminologist Lonnie Athens has a theory about the “process of transforming a person capable of violence” that he called Violentization. Between two schools of thought, one that considers the emergence of violent individuals to be inherent (genetic) and the other societal, Antz believes in the latter.

In this theory, he describes the process of achieving violence in four stages that must be sequenced:

1- Involuntary Brutalization: One experiences all three of the following at the same time: First, being subjected to or being violently attacked; second, being intimidated by seeing someone else being attacked or threatened, and third, being exposed to violence or being coerced into using violence against others.

2- Belligerency: At this stage, the individual at various stages of his or her step-by-step aggressive behavior reinforces the situation. With this repetitive behavior, people become emotionally dependent on what they do. Because of this emotional attachment, one turns to violence as a means of controlling and dominating others.

3- The third stage is violent performance, and the person performs the fighting spirit in self-defense. The reason for resorting to violence at this stage is purely defensive is that severe violence involves the risk of injury or even death, and even the police or experienced soldier does not easily present such a risk.

Many people, especially those who use violence as an official occupation (police, soldiers, etc.), stop at this point. That is, they are only prepared to act when they are at high risk.

4-In the fourth stage, or “unrelenting virulency violence”, the person with repeated experience of the success of violence makes it a solution to overpower, fear and enjoy it and gain respect.

A person defined in this fourth category experiences for the first time respect and dominance over others so that the memories of being helpless and exposed to violence are erased. From then on, violence becomes his primary form of expression in society for dominating others without excuse or with the slightest provocation.

The purpose of explaining Athens ‘s theory is to investigate the violent behavior of the security forces in Iran with the recent uprising protesters.

Modern urban communities are comprised of a majority of peaceful people and minority groups with “violent behavior”, and of course people with “unrelenting violence” can also be found. The point is that in criminal organizations or governments, you also find people sitting at the table who do not personally commit violence but can be the commander or facilitator of the greatest crimes. Let’s get back to the discussion of the current situation: Don’t forget that going from the first to the second step is a choice.

What we see is that the boundless violence used by the Islamic Republic and the IRGC and plainclothes against the civilian population has brought the masses into the first stage, automatically exercising their legitimate right to self-defense.

But what about the opposite? Aren’t all those on the opposite side in the fourth stage of “unrelenting violence”? Aren’t the Basijis and security elements institutionalize organized violence by employing the most heinous and cruel methods of repression?

Let’s learn from the history. Many historians maintain that the predators of the most violent and criminal gangs that human history has ever experienced were members of the “Einsatzgruppen” (operational groups), a Nazi task force for killing of Jews.

These people moved behind the German army in the east (Poland and the Soviet Union) and after gathering Jews in villages and towns, they shot infants, children, women and men to the head or chest and occasionally by extremely sophisticated means. Babies head were slammed against trees etc.

These thousands of people, including lawyers, doctors, empirical scientists, and a large number of police and apparently ordinary people, have killed more than 2 million people. In just one case in Babi Yar of Ukraine, 33,771 men and women were shot aside a ditch in two days.

Be careful: The volume of organized killings and the use of violence were committed by a group that was not necessarily military! Just like the Islamic Republic, the organization mobilizes its forces from all departments, schools, ministries, universities and so on. It sends its plainclothes agents to the streets and fires on the protesters heads and hearts with firearms.

The violence that such groups or individuals can institutionalize in society is even more dangerous and destructive than some historians have argued, and leaves psychological and social impact on future generations.

Even the use of the word “defenders of the homeland” such as “defenders of the shrine” who went to Syria shows another aspect of victimization of the state. The Islamic Republic is trying to position itself as a “defender” of its main violent force. However, these forces are the main cause of violence and brutality in the streets.

A look at the figures of the martyrs and the wounded is a testimony to the truth.

But are we facing reckless killers of regime’s repression (stage 4), according to Athens ‘s theory? The answer is yes. Remember that Revolutionary Guards commander Hossein Hamedani talked about recruiting 5,000 mobs in 2009 to suppress uprising in Iranian cities! Those who were undoubtedly found to be the most accomplished criminals. This technique is used to recruit dangerous criminals, and was also used in the November protests.

Prof. Sheehan:Silence by Western powers,it must b remembered,was all too prevalent during the murderous crackdowns on #protesters in 2009&2018,&in numerous other repressive episodes dating back to the #1988massacre of 30,000 political prisoners.#IranProtests #StopIranBloodshed pic.twitter.com/f9NVKFO5Dx

The important point, however, is that the forces of the Fourth stage cannot naturally cope with the young and courageous protesters alone in these recent demonstrations. In fact, they need an environment of activity that the other group provides. Therefore, the two main layers of security forces provided the main field of killing and violence.

Street and floor battles are a “skill or a group game”. If someone tells you that a good soccer or volleyball team sends people who haven’t’ ever touch a ball to the pitch, you would not accept it. So don’t accept the claim about “violent protesters” either.

What many do not know about war is that war is not just about weapons or logistics. The main and often the most important element is the courage of a soldier. All the armies of the world emphasize the element of courage and the spirit of militancy. Now the Iranian people are also involved in a war with a homegrown occupying force.

This war requires many lessons. The debate over whether protesters are violent should be considered a “diversion” in the path to victory. The people have not chosen the form and type of struggle in this field—it is the Islamic Republic that imposes it on the protesters.