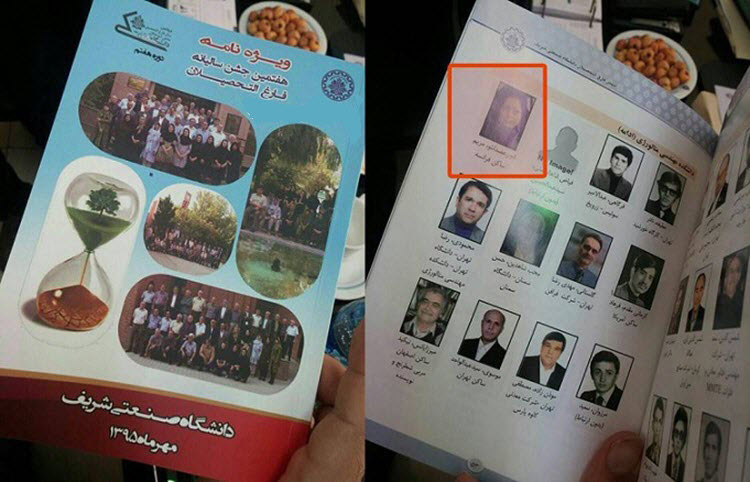 In an article published on October 5, The National Council of Resistance of Iran (NCRI) writes that theIranian regime closed down the Society of Graduates in Sharif University of Technology, after publication of a photo of Maryam Rajavi, the president-elect of the NCRI, in its latest book listing its former alumni.

Sharif University of Technology is one of the largest engineering schools in the Islamic Republic of Iran. A public research university in Tehran, it is traditionally known to be the first choice of top ranked Iranian high school and university students in engineering.  The photo of Mrs. Rajavi was published in the section introducing the graduates of Faculty of Metallurgy Engineering.

Reacting angrily to the publication of photo of Mrs. Rajavi, the Iranian regime’s officials and their affiliated organizations described her as the “number 1 enemy” of the regime.

Fars News Agency, a state run publication, quoted Hamod Fotohi, the University President, as saying, “As soon as we were informed of the distribution of a number of this publication among the students we ordered its further distribution to be blocked and all those already distributed to be collected and be transferred to Herasat Office (state body in charge of repression of students in universes and schools),” and continued, “We sieged the activities of Society of Graduates. The Society of Graduates must be held accountable for what they have done. We would follow up to find out why this has happened.  We would certainly deal with those responsible for printing of the photo and the publication of the book.”

When Iranian schools open in fall, the Society of Graduates holds an annual conference and publishes information on a group graduate of the university.

Fotohi said, “This society is not being supervised by the university but has an office at the university which we have shut down now and we are reviewing this problem.”

Raja News, another state-run website quoted Fotohi as saying, “This issue will soon be reviewed with help of intelligence organizations.”

The publication of Rajavi’s photo also drew protest by over 30 members of the parliament, who asked the regime’s Minister of Higher Education “What is the reason behind the publication of the photo of the leader of The People’s Mojahedin Organization of Iran (PMOI) in the Special Publication of the Society of Gradates of Sharif University of Techonlogy?”

State-run Afkar News described Maryam Rajavi as “number 1 enemy” of the regime and regarded the publication of the photo as a “strange act.”

A statement by the regime’s authorities in the university said: “The order for banning all the activities of the Society of Graduates have been issued and all the copies of the book have been collected.”  The statement continued, “The necessary follow ups for legally dealing with the violators is taking place by the relevant authorities.”

The Islamic Society told ANAJ news website that is “calling on the university to deal with this society.”

State-run Mashreq News warned that “when such moves become routine in the universities they would probably lead to sedition and chaos at the scientific atmosphere of the country.”

Mashreq News wrote, “In an interesting move, the country’s industrial universities have welcomed the new students with a propaganda for the PMOI. Therefore, it is not clear under such circumstances, toward which direction the new school year and students will turn?”

Further, Mashreq News says, “In the beginning of this school year we are witnessing deviated acts in the important industrial universities of the country which is a source of concern.”

And concludes their article by saying, “In this regard, in a strange move, Sharif University published the photo of Maryam Rajavi in its graduate’s special edition. This is while the universities are welcoming the new students for the new school year. Once such moves become routine in the universities, they would probably lead to sedition and chaos at the scientific atmosphere of the country.”