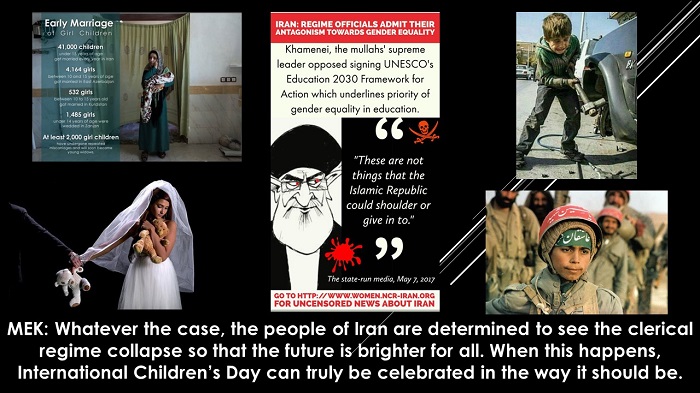 International Children’s Day in Iran is celebrated on 8th October. However, this is not a day of celebration given the appalling conditions for children in the country.

The situation of children across the world are monitored by UNICEF and five key areas are examined – the survival and development of children, basic education standards, gender equality, the protection of children from violence, abuse, and rape, and finally immunity to AIDS.

According to these five factors, the situation of millions of children in Iran can only be described as catastrophic.

Firstly, the situation of children in the country is of no significance to the clerical regime. This is evidenced through numerous actions, such as the use of children to fight in the regime’s battles such as the Iran-Iraq war during the eighties.

FACT: Khomeini's fatwa allowed children to be sent to war WITHOUT parents' consent.

In the Iran-Iraq war, thousands were snatched from school, given plastic keys to heaven & used in human waves to clear minefields.

If you're a parent, imagine your kid not returning from school. pic.twitter.com/Qj1XD6SrsG

The regime has also allowed the forced marriage of children and continues to execute Iranians that were minors at the time of their crime. Children have also been tortured by authorities in front of their parents.

There are several internationally recognized norms and laws related to the safety, protection, and treatment of children, but the Iranian regime systematically ignores these.

Child marriage is a significant problem in #Iran where girls as young as 10 are being forced into marriage. According to the Sharia-based law of Iran, the legal age for marriage is 13 for girls and 15 for boys. #FreeIran2020 https://t.co/r4mEHNnoG5 pic.twitter.com/4rSmtRE4Eo

Iran is governed by the “absolute rule” of the Supreme Leader. This leaves no room for democracy, with people being obliged to submit to and obey the regime’s laws and obligations, no matter how medieval and out-of-date they may be.

The basic care of children, their status with regards to health and education, and so on, is not something that the regime cares about or concerns itself with.

#Iran: The mullahs’ parliament continues 2 refuse to pass a bill seeking to raise the minimum age of marriage 4 girls.. Those who defend 2 preserve the #Iranian regime turn a blind eye on the psychological & physical damages of #childmarriage on #girls https://t.co/HyUpvBbjKU pic.twitter.com/cp6TQqjndG

This has recently been evidenced through the regime’s decision to reopen schools despite warnings from scientific and medical experts that said this would lead to a massive surge in the number of cases of COVID-19. It was only the massive opposition from parents across the country that forced the regime to retreat. Over 121,600 people have died of the coronavirus in Iran, according to reports by the People’s Mojahedin Organization of Iran (PMOI / MEK Iran).

The regime’s reaction to the 2030 Agenda for Sustainable Development shows just how the Iranian government treats the issue of children and education. The agenda contains a number of sets of goals. The member states of the United Nations have a responsibility to guarantee “inclusive and quality education for all” and they must “promote lifelong learning” for all. It is very clear that this relates to everyone regardless of ethnicity, gender, or age.

#Iran Regime's Leader: It Is Naive to Think #UNESCO 2030 Agenda Is Not Binding. https://t.co/nSJXXABC7X pic.twitter.com/uMEsmmbbs6

The Supreme Leader was outraged at the National Education Act, saying that “Islam is the benchmark” and that education “is not a place where the deficient, destructive, and corrupt Western lifestyle can infiltrate!” He said that the UNESCO 2030 agenda is not like the agenda of his country and therefore Iran will not “surrender and submit” to it.

The agenda was enthusiastically adopted by the majority of countries. Priorities include the elimination of violence in classes, the refusal of gender segregation, and human rights for children.

In Iran, there is a huge workforce of children. Some of these children are peddlers, some are orphans, some have been deprived of education for a whole host of reasons. Some children are quite simply “working children” because they have no choice due to circumstances. Many children across the country cannot afford to go to school.

With the ever-increasing social problem of child laborers in many of Iran’s cities, the question is why the regime is turning a blind eye to such horrors in its midst.

Today, June 12th, is World Day Against Child Labor#Iran, ruled by the mullahs' regime, has a child labor population of 7 million.
Be their voice. pic.twitter.com/PUXIT8AJ5C

Mrs. Maryam Rajavi is the President-elect of the National Council of Resistance of Iran’s (NCRI): Iranian children are the hungriest, the most innocent, and the most oppressed sector of Iranian society. Their conditions are tantamount to organized crime by the mullahs’ religious dictatorship.

The (PMOI / MEK Iran), is opposed to the regime’s oppression of women, including child marriage. The MEK and the Iranian Opposition offer a democratic alternative to the religious dictatorship, in which men and women can have equal representation in government. Mrs. Maryam Rajavi, President-elect of the Iranian Opposition, has a ten-point plan to restore democratic rule to Iran after the fall of the mullahs’ regime and to ensure that child marriage is a thing of the past.

Iranian children are the hungriest, the most innocent and the most oppressed sector of Iranian society. Their conditions are tantamount to organized crime by the mullahs’ religious dictatorship. #NoChildLabour #WDACL #Iran pic.twitter.com/GfD97kPh78