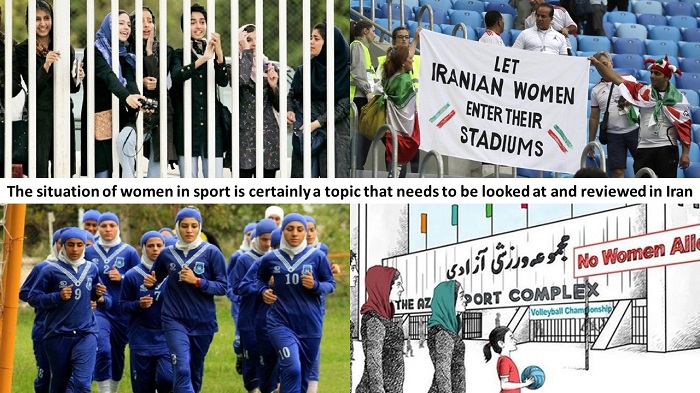 On Tuesday 6th April, people all over the world celebrated International Day of Sport for Development and Peace. The day was proclaimed by the United Nations General Assembly in 2013 and it invites states, regional, national, and international sports organizations, the private sector, civil society, non-governmental organizations, and all to “observe and raise awareness” of the day.

The National Council of Resistance of Iran (NCRI), and the People’s Mujahedin of Iran (PMOI / MEK Iran) report that the situation of women in sport is certainly a topic that needs to be looked at and reviewed in Iran where women are extremely underrepresented.

In December, the Iranian women’s football team was removed from FIFA rankings because it has not been active for two years.

Officials in Iran failed to act on the matter meaning that the issue was never able to be resolved. The coach for Iran’s national female football team, Azam Gholami, said that the federation shows no regard for the team. Gholami explained that the team is not even given any facilities meaning they do not have an opportunity to play or train.

Another example of inequality is that of the national futsal team. The team is renowned for its talent, twice winning the Asian Cup. They should have been due to attend camp in March, but it was banned by the federation because of Coronavirus restrictions. In the meantime, the male team was able to meet on a number of occasions, highlighting the blatant inequality.

The government of Iran does not allow Iranian women to practice surfing. Once girls hit puberty, they are obliged to give up the sport. This means that the young girls do not have any female coaches to learn from.

A group of officials issued a statement in July 2020 opposing the Zurkhaneh bodybuilding sport. In their statement, they said it was “disgusting” that women could practice this sport. It has now been banned for women in Iran.

The regime’s misogynous attitude is extended to cycling too. Even though there is no law that obliges women to stay away from this sport, they have been de facto banned by the authorities. Over the course of the past year, a number of bike rental shops were forced to close after they were found to be renting bikes to females.

The misogynous laws in Iran also prejudice women in other ways. For example, the husband of Samira Zargari, the head coach of the women’s national alpine skiing team, refused to give permission for her to travel with her team to the World Cup in Italy. Many other female athletes in the country were not allowed to travel for their sport because their spouses refused to give permission.

A number of Iranian chess players have actually fled Iran after participating in competitions abroad. One such female is Shohreh Bayat, a referee of the World Championships, a senior member of the FIDE Referees Committee, and secretary of the Iranian Chess Federation.

The young woman went to the United Kingdom in January last year to seek asylum. She has since been awarded an International Women of Courage Award for ignoring threats from the Iranian government and for being a champion for women’s rights.

Young female football fan Sahar Khodayari died on September 9 from injuries sustained when she self-immolated outside a Tehran courthouse in protest to her six-month jail sentence for trying to enter the Azadi stadium to watch her favorite team play.