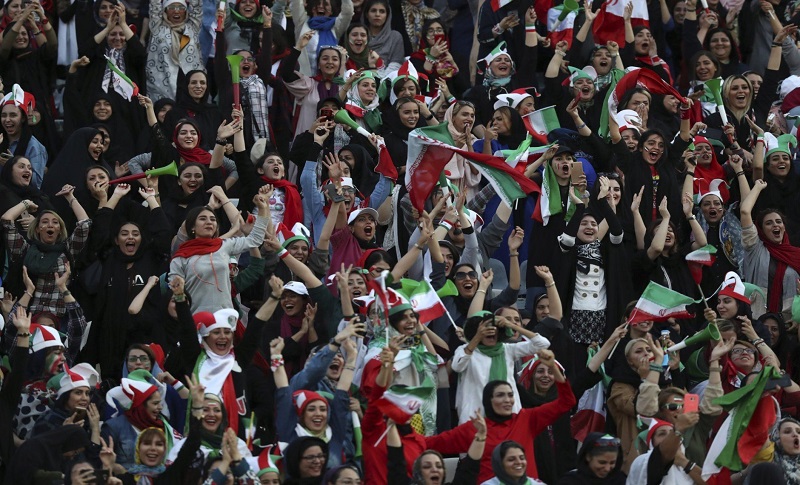 Last month, a female Iranian football fan, known widely as Blue Girl, set herself on fire at a courthouse in Tehran, after learning that she faced a six-month jail term for attending a soccer match, and sadly died from her injuries.

Sahar Khodayari’s death created a major firestorm in both Iran and the West, highlighting the perils for female sports fans under the regime. After being widely condemned and threatened with expulsion from FIFA, the mullahs were forced to backtrack temporarily on their ban on women in sports arenas and allow a limited number of women to watch the Iran-Cambodia match at Tehran’s Azadi Stadium.

Still, they only released about 3,500 seats across four sections for sale to women, despite the fact that Azadi Stadium has a capacity of 95,000. This doesn’t indicate any real change on behalf of the mullahs.

Philip Luther, the Middle East and North Africa Research and Advocacy Director at Amnesty International, said: “Iran’s decision to allow a token number of women into the stadium for tomorrow’s football match is a cynical publicity stunt by the authorities intended to whitewash their image following the global outcry over Sahar Khodayri’s tragic death.”

Of course, the mullahs were never going to change their minds. They perceive women to be a threat to the regime, with Tehran prosecutor Mohammad-Jafar Montazeri even describing women’s presence in the football arena as “a calculated move by the enemies”. The regime’s misogyny goes far deeper than denying them entry into football stadiums though and this is just one example of the systematic and institutionalized discrimination against Iranian women.

The President-elect of the National Council of Resistance of Iran (NCRI) coalition Maryam Rajavi has laid out a ten-point plan for a Free Iran that champions gender equality across the board, including the equal participation of women in Iran’s political leadership once the mullahs are overthrown. That’s why so many of them already have the highest positions in the MEK and NCRI, which serves as a parliament-in-exile from its headquarters in Albania.

Rajavi said: “So long as the clerical regime has not been overthrown, it will not let up on executions and torture. Nor will it let up on misogyny, religious discrimination, terrorism and warmongering.”