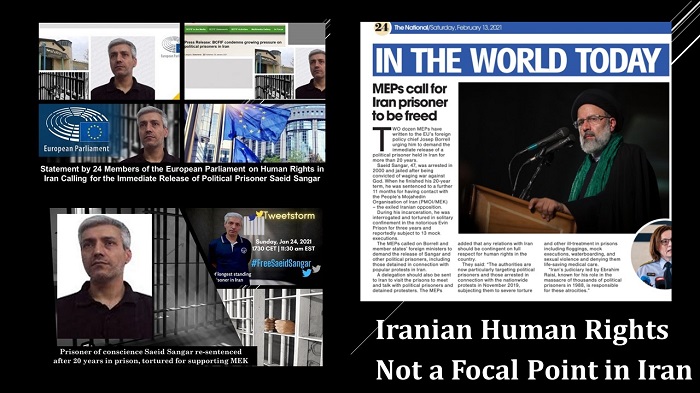 Just last month, the Iranian judiciary out of the blue added 11 months to Saeid Sangar’s prison term. It was already set at 20 years having recently been increased from 18 years.

He was first arrested in August 2000 and charged with “waging war on God” and keeping up communication contacts with Iran’s main democratic opposition group, the People’s Mujahedin of Iran (PMOI / MEK Iran).

He was not far off his release date when these extra 11 months were added on. In many other similar cases when the authorities have delayed a scheduled release, it is because it wants to exert psychological pressure on a particular detainee or stop them from pursuing political activities once outside of prison and in the community.

Sangar was subject to torture

Over the 20 years in prison in Tehran’s Evin Prison and also in Urmia Central Prison, Sangar was allegedly tortured and was even subjected to 13 mock executions. The National Council of Resistance of Iran (NCRI), described this harsh treatment as “retaliation” for failing to refuse to disavow his political affiliations and to issue public statements that were condemning the Iranian regime.

The regime is known for its use of torture and threats against prisoners’ families in the hope of gaining confessions which are then handed on to the state media and broadcasted to the public.

In September 2020, Amnesty International released a report not long after the uprising and crackdown, called “Trampling Humanity.” It said that the first killings and arrests were just the beginning of a bigger pattern.

What followed was the Iranian judiciary “bringing national security charges against hundreds of people solely for exercising their rights to freedom of expression, association, and peaceful assembly, while judges doled out guilty verdicts on the basis of torture-tainted ‘confessions’.”

This report was mentioned in a statement signed by 24 members of the European Parliament, which concentrated its attention on Saeid Sangar.

It argued that the extension to the prison term is similarly part of a larger pattern of the escalation of repression. “We are deeply concerned about the alarming human rights situation in Iran, especially a recent surge of executions and mass arrests across the country since December 2020.”

The statement, put together by the European Parliament’s Friends of a Free Iran (FOFI), said that what is happening in Sangar’s case is being spearheaded by figures like Ebrahim Raisi, the present head of the Iranian judiciary.

In 1988, Raisi played was known to have played a key role in the “death commissions” that were put together for prisoners throughout the Islamic Republic in response to a fatwa from the regime’s founder Ruhollah Khomeini.

Khomeini specifically mentioned that members and affiliates of the MEK were enemies of God so could be executed. This became the main mission of the death commissions, who ordered the execution of about 30,000 political prisoners in just a few months.

In September Amnesty International released its report following the 2019 uprising when a group of UN human rights experts sent a letter to Iranian authorities reminding them of the unresolved history of the 1988 massacre and requesting more information about its process and how it was covered-up. Tehran did not respond to the letter was released for public viewing in December.

The UN experts referred to the “failure” of the General Assembly, Security Council, and UN Commission on Human Rights to take serious action addressing the 1988 massacre. This, they said, “had a devastating impact on the survivors and families as well as on the general situation of human rights in Iran.”

The statement recommends that the EU and its member states impose sanctions under the Magnitsky Act “against any Iranian officials who have committed serious human rights violations.”

The expected targets for these sanctions should include Raisi and several other high-ranking officials who are known or suspected to have played a role in the 1988 massacre, the recent, violent crackdowns on public expressions dissent, or both.