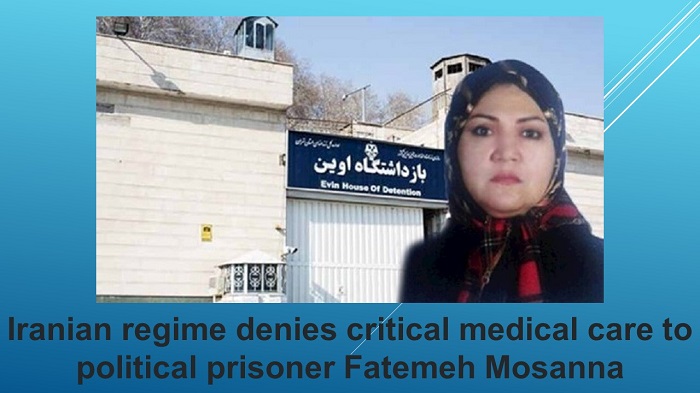 The Iranian Resistance, the People’s Mojahedin Organization of Iran (PMOI / MEK Iran)’s the internal network has reported that regime and prison officials are denying a political prisoner of essential and urgent medical treatment. The political prisoner in question is Fatemeh Mosanna who is currently jailed in the notorious Evin Prison in the country’s capital.

Ms. Mosanna who has chronic colitis has had intestinal bleeding since the summer and doctors have said that her condition will worsen if she remains in prison. She hemorrhaged in August and lost consciousness. She had to be transferred to Taleghani hospital where she remained for a week despite doctors advising that she was still being treated and further examinations had to be carried out. During her hospital stay, Ms. Mosanna was chained to the bed.

Iranian political prisoner Fatemeh Mosanna is in critical health conditions and regime authorities are denying her medical treatment, according to reports obtained by the Iranian Resistance from inside #Iran.#FreePoliticalPrisonershttps://t.co/49IzAdctBR

A few weeks later, she fell seriously ill again and was taken to hospital, but as before she was taken back to prison before her examinations could be completed.

At the end of last year, the doctor that tried to treat her at Taleghani hospital demanded further tests and said once again that she is not well enough to deal with the conditions in prison.

The main opposition to the Iranian regime, the National Council of Resistance of Iran (NCRI), and the People’s Mojahedin Organization of Iran (PMOI / MEK Iran), called on the international community to intervene quickly in the situation.

The organization called on the Secretary-General of the United Nations, the UN High Commissioner, the UN Human Rights Council, and all human rights organizations to pay attention to the case and intervene to their full capacity to ensure that Ms. Mosanna is released from prison and given the treatment that she desperately needs.

2-#Fatemeh_Mosanna & her husband were each sentenced 15 years in prison for “Moharebeh (waging war on God) for supporting the MEK (Iran regime's main opposition)
She's been under torture since her arrest.
#SOSFatemeh pic.twitter.com/rwoyez0NmM

The NCRI also reiterated its calls for a fact-finding mission to be sent to Iran to assess the situation in prisons, to speak to inmates, in particular political prisoners and female prisoners, so that action can be taken to stop the Iranian regime from abusing the human rights of its people.

Ms. Mosanna is from a family with a long history of resistance. Her siblings – Ali, Mostafa, and Morteza Mosanna – were all members of the (PMOI / MEK Iran) and were all executed by the regime during the eighties.

Back at the beginning of 2012, Ms. Mosanna, her husband Hassan Sadeghi, and their two children attended a mourning ceremony during which they were arrested. The ceremony was in honor of Gholamhossein Sadeghi, Ms. Mosanna’s father-in-law, who was a member of the (PMOI / MEK Iran). He died in Campy Liberty in Iraq because of a medical blockade that the Iraqi government (backed by Iran) put in place.

#SOSFatemeh
Pol prisoner Fatemeh Mosanna is in dire need of medical attention,we call on int community to be her voice!
She was 1st arrested at age of 13y with her mother while 3brothers executed & has been in-&-out of prison since childhood due to her families support for #MEK pic.twitter.com/WFoXpjAOJF

Despite being released on bail, Ms. Mosanna and her husband were charged with “enmity against God”, or moharebeh, after being summoned to court by authorities. They were both handed 15 years imprisonment and were sent to prison in 2015 to serve their sentences.

The people of Iran have been horrified by Ms. Mosanna’s treatment and have launched a campaign on social media with the hashtag #SOSFatemeh to draw the international community’s attention to this appalling situation.