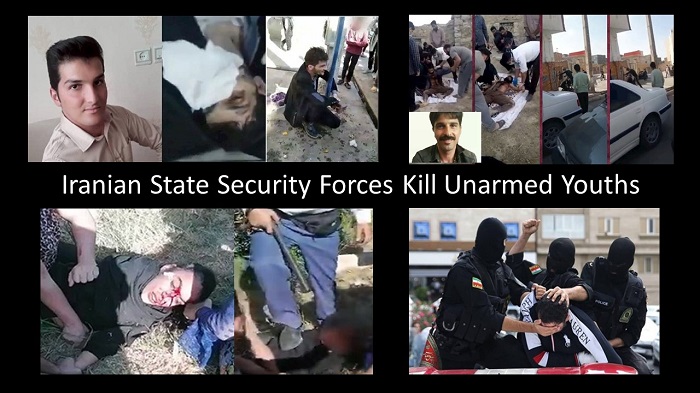 An increasing pattern of brutal violence is being unleashed against the Iranian public, especially the youth, in an attempt to shore up the mullahs, who are losing public trust and respect as they mismanage the economy and the response to the Covid-19 epidemic. Over 133,700 people have died of the coronavirus in Iran, according to reports by the People’s Mojahedin Organization of Iran (PMOI / MEK Iran).

Most recently, state security forces were seen beating up a 28-year-old man, Mehrdad Sepehri, on the streets of Mashhad. Tasers, electric shockers, and pepper spray were used on the young man and he was punched repeatedly as he was handcuffed to a bar. He later died from his injuries while in custody.

Amid increased repressive measures by the Iranian regime, the State Security Force (SSF) tortured and killed a 28-year-old man named Mehrdad Sepehri in the city of Mashhad with tasers and pepper spray.#Iran#HumanRightshttps://t.co/8MZbsILqP5

The whole encounter was filmed and shown on social media, prompting widespread anger by the Iranian public.

In another similar incident, security forces beat a young man to death after shooting him in Esfarayen. These sorts of incidents seem to become more common. In Davazdah Emam village, Basij forces killed a young man in an altercation caused by the Basij trying to steal the young man’s livestock.

October 23 – Esfarāyen, northeast #Iran
Young man murdered by the police as the officers opened fire. Footage from the scene shows that the police officers were assaulting the young man despite him suffering a gunshot wound. pic.twitter.com/ZtFnhc75xM

The President-elect of the National Council of Resistance of Iran (NCRI), Mrs. Maryam Rajavi, referred to the increasing brutality of the security forces when she said: “the scenes of torture and brutal murder of this young man in public have left a scar on the conscience and feelings of the Iranian people. This has been the routine and daily behavior of the IRGC, paramilitary Basijis, security, and intelligence forces against the people of Iran and the children of this country for the past 40 years, some of which are only now being revealed.”

Maryam Rajavi: The Brutal Torture and Murder of a Young Man in #Iran Shows the Viciousness of a Regime That Can Only Rule Thru Execution, Torture, and Repression#HumanRights #NoImpunity4Mullahs
https://t.co/FzttFSfVkS

“The recent unhinged acts of cruelty, from Mahshahr and Abadan to Mashhad and Tehran, show that the clerical regime has been able to continue its rule only through repression, torture, and execution. These crimes have been ongoing in our occupied homeland. But enough is enough.”

“The people and youth of this homeland can no longer tolerate it. The international community must condemn the torture and murder of defenseless young man Mehrdad Sepehri. The SSF must be sanctioned and blacklisted. Dealing with and appeasing a regime that is a disgrace to contemporary humanity is an affront to human rights and universal democratic principles.”

These criminal acts by the Iranian regime’s security forces aim to establish a climate of fear and silence in society. At the same time, fearing a backlash over repressive measures, the regime Judiciary Chief Ebrahim Rasi recently announced judicial reforms that were supposedly meant to ease some of the repressive measures the regime imposes on the public.

Ebrahim Raisi, for those with memories of his role in the past, is hardly the defender of human rights. He was deeply involved in the arrest and murder of 30,000 political prisoners in 1988, the majority of them were members or supporters of the People’s Mojahedin Organization of Iran (PMOI / MEK Iran).

As has been proven time and again in the past four decades, it is impossible for the regime to abandon torture and execution. Oppression, persecution, and crackdown are vital to the mullahs’ stay in power.

As these cases and other facts on the ground show, the regime’s repressive measures have only intensified in the past weeks.

This is a method being used by the regime to scare Iranians from taking part in MEK resistance movement activities by the supporters of the People’s Mojahedin of Iran (PMOI / MEK Iran).