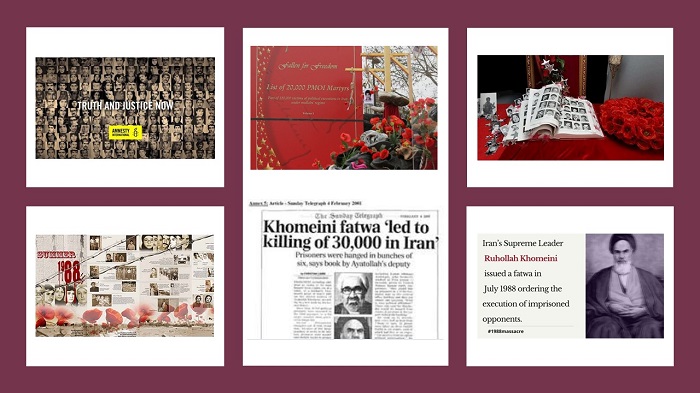 The following is a summary of an appeal by 21human rights groups to have the1988 massacre of 30,000 political activists in Iran fully investigated. The perpetrators of this massacre never faced justice and in fact, some of them now occupy important and leading positions in the Iranian government.

#HumanRights Groups Urge UN to Investigate #Iran's #1988Massacre
Executions of 30,000 #politicalprisoners, primarily members of the opposition PMOI or #MEK has never been investigated, and the perpetrators have never been brought to accounthttps://t.co/cTcWX1OVrd

The 21 NGOs released the following statement:

“It is time to bring to justice the perpetrators of the 1988 massacre in the Islamic Republic of Iran.

We appeal to the United Nations (UN) and its Member States to investigate the 1988 massacre of political prisoners in the Islamic Republic of Iran and to hold the perpetrators of that ‘ongoing crime against humanity’ accountable.

In the summer of 1988, regime founder Ruhollah Khomeini issued a fatwa calling for the execution of all #MEK political prisoners in #Iran.https://t.co/8F8IyVpmJM #Iranian #coronavirus #IStandWithMaryamRajavi @USAdarFarsi #اعدام_نکنید #StopExecutionsInIran #FreeIran2020

Crimes against humanity are not bound by the statute of limitations, and even though the 1988 massacre was perpetrated 32 years ago, it is still prosecutable today. Iranian officials brazenly claim Khomeini’s fatwa still stands against The People’s Mojahedin Organization of Iran (PMOI / MEK Iran), dissidents. The perpetrators of the 1988 massacre today run the Iranian government and Judiciary. The survivors are still alive, and the evidence is all readily available.

On behalf of our respective NGOs, we appeal to the Human Rights Council to take urgent action to end the impunity enjoyed by Iranian officials and prevent the massacre of detained protesters. Leaders of the Iranian government must face justice for committing crimes against humanity in the recent massive suppression and bloodshed.

MASSACRE:
In the summer of 1988, the #Iranian regime summarily & extra-judicially executed tens of thousands of political prisoners across #Iran. The massacre was carried out based on a fatwa by the regime’s then-Supreme Leader Ruhollah #Khomeini. #MEK #WeSupportMEK @USAdarFarsi pic.twitter.com/F9Yv0xrn8w

We believe that until the international community holds the perpetrators of the 1988 massacre to account, Iran’s authorities would continue to be emboldened to further crackdown with impunity on present-day protesters. Iranian officials construe silence and inaction by the international community as a green light to continue and step up their crimes.

We, therefore, call on the Human Rights Council to set up a commission of inquiry into the 1988 massacre and achieve justice for the victims of that crime against humanity.

We urge High Commissioner Michelle Bachelet to support the launch of independent fact-finding missions into the 1988 massacre and the recent massacre of Iranian protesters.

Some background to the appeal:

The 1988 massacre was mainly of activists who supported or were members of the main opposition organization (PMOI / MEK Iran). The Supreme Leader at the time, Ruhollah Khomeini, issued a fatwa, or death sentence on any member of the MEK.

In July 1988, the Iranian religious fascism’s founder and first supreme leader Ruhollah Khomeini issued a fatwa ordering the execution of imprisoned opponents, including those who had already been tried and were serving their prison terms #1988Massacre https://t.co/hMvsjAl7pU

This fatwa has never been lifted and has given justification by the regime to continue to arrest and imprison anyone who they remotely think is connected to the MEK in Iran. In fact, the fatwa is also the principle that allows the regime to continue to pursue its acts of oppression and terror against the Iranian opposition outside Iran’s borders. This includes sending MOIS agents to Albania where the MEK has its current base at Ashraf-3 and even an attempt to blow up a summit in Paris in 2018, organized by the opposition umbrella organization, the NCRI.

As the regime becomes increasingly unstable and its inability to govern Iran in the best interests of its people is exposed so that all can see, including many foreign individuals and organizations, it is lashing out more and more wherever it sees the slightest sign of dissent. The recent execution of well known Iranian wrestler, Navid Afkari, is an example.

11)
In her August 2017 report to @UN General Assembly, the late Asma Jahangir, Special Rapporteur on Iran, documented the events that led to #1988Massacre. "These events, known as the 1988 massacres, have never been officially acknowledged,” she wrote.https://t.co/8gp4idSSnS pic.twitter.com/qLIvnCBmYP

The Iranian regime has been able to continue its policy of internal repression and external terror by the seeming acquiescence of foreign governments. The appeal made by the 21NGOs hopes that the U.N. will soon start to address the long unresolved issue of brutal tactics in Iran by the regime which should not be allowed to continue.

In the summer of 1988, a fatwa by the #Iranian regime's founder, Ruhollah Khomeini sent 30,000 political prisoners to the gallows in Iran https://t.co/0TxlgIKCy7#مجاهدین_خلق pic.twitter.com/1HHCjpTusV