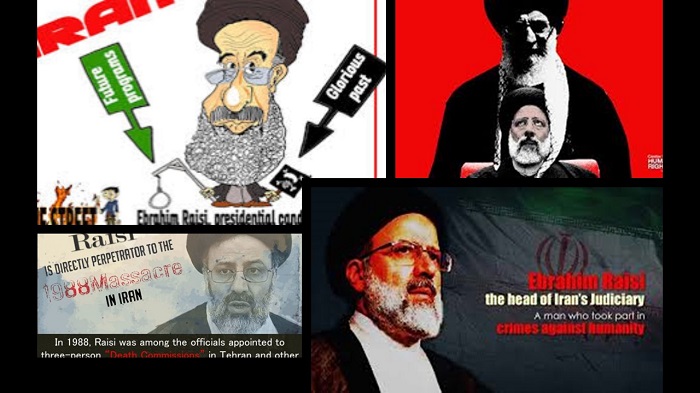 Iranian Judiciary Chief Ebrahim Raisi, furious at being forced to delay the execution of three young protesters, went on a tirade on Monday against the Iranian people’s huge social media campaign against the hangings, dismissing it as the work of bots.

This is eerily reminiscent of comments made in December 1978 by General Azhari, the former Shah’s army strongman, who described the people’s chants of “Death to the Shah” as recordings made to make the crowds seem bigger.

Raisi also urged so-called judges to “be vigilant against violent crimes” and deal firmly with “defiant individuals” to stop them “entering into the legal field”.

Also on Monday, Judiciary Spokesperson Brig. Gen. Gholam-Hossein Esmaili announced that 34-year-old Mahmoud Mousavi Majd, a member of the Islamic Revolutionary Guard Corps (IRGC), was executed for spying and providing intelligence about the movements of then-Qods Force Commander Qassem Soleimani. (The Judiciary Press Office said that this has nothing to do with the assassination of Soleimani in January 2020 by a US drone strike.)

Mousavi grew up in Syria because his father was in the embassy and fought against the Syrian people in the civil war from 2013 until his arrest in September 2018.

He was arrested by the Qods Force intelligence unit in Syria and spent 20 days in a Qods Force prison in Damascus. He was then moved to an IRGC intelligence prison in Tehran, before being sent to Evin Prison, when he was sentenced to death. His death sentence was announced by Esmaili on June 8.

It has been said that Mousavi was executed quickly because he had extensive knowledge about crimes committed by senior IRGC officials. This would also explain why his lawyer was not permitted to meet him in person and why the case was made confidential.

Even though Mousavi committed countless crimes against the people of Iran and Syria, the Iranian Resistance (NCRI) condemned his sentencing and execution as a “violation of all humanitarian and legal principles and standards”.

The Resistance (NCRI) wrote: “The religious fascism ruling Iran wants to use these types of executions as a means to instill fear among the IRGC to prevent defections on the one hand, and on the other to create an atmosphere of terror in society to prevent popular uprisings, while also compensating for the cessation of the three young protesters.”