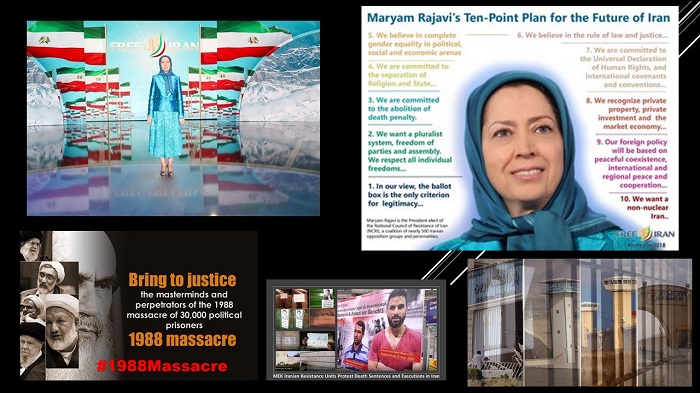 The Iranian opposition TV network, Iran National Television (INTV) has reported that on the World Day against the Death Penalty, 10 October 2020, Iranian political prisoners supporters of the People’s Mojahedin Organization of Iran (PMOI / MEK Iran), issued statements in support of the abolishment of the death penalty.

The People’s Mojahedin Organization of Iran (PMOI / MEK Iran) and the National Council of Resistance of Iran (NCRI), have been working to draw international attention to the regimes human rights violations and use of the death penalty as a means of intimidation and oppression.

Political prisoners across #Iran are issuing statements marking the World Day Against the Death Penalty.#StopExecutionsInIranhttps://t.co/PRDhPNRJ6d

The prisoners who have issued the statements are supporters of the MEK, detained in inhumane conditions for speaking out against the theocratic regime. They risk their lives by bravely issuing the following statements against the death penalty.

Mrs. Rajavi is the President-elect of the National Council of Resistance of Iran (NCRI).#Iran #FreeIran @Maryam_Rajavi @iran_policy https://t.co/FgMWsrJRBo

The regime’s Supreme Leader has preserved his grasp on power for 40 years by using the gallows and the firing squads. The Mullahs’ regime hanged two rebellious protesters, Mostafa Salehi and Navid Afkari, after the major Iran protests and murdered 1500 protesters. The regime’s crimes are not limited to these; they confiscated Mostafa Salehi’s home from his orphaned children. Of course, this is surprising. After the massacre of 30,000 political prisoners in 1988, by any measure a genocide and a crime against humanity, the mullahs have committed countless atrocities.”

At the infamous Evin Prison, political prisoners issued a collective statement on 8 October 2020 emphasizing the necessity of holding the regime accountable for their crimes against humanity:

“In their 40 years of ominous and disgraceful rule, these anti-human mullahs have used execution as a tool to oppress people and establish an atmosphere of fear and repression; and have profited from their actions.
The execution of over 30,000 political prisoners in the summer of 1988, which was carried out according to a fatwa by then-supreme leader Ruhollah Khomeini, displays the regime’s brutal nature in using this heinous act to oppress any voice of dissent or thwart any uprising.

These #Iran ian officials criminals are responsible for 1988 massacre in Iran and corruptions and crisis in Middle East. It is time that #G7 sanction this regime and under maximum pressure. These criminals must be brought to Justice for crime they committed against humanity pic.twitter.com/OnXr5YCqT7

Therefore, all those criminals involved in this crime, including [Ebrahim] Raisi [current Judiciary Chief], [Mohammad] Moghiseh [The regime’s so-called Revolutionary Prosecutor] [Hossain-Ali] Nayeri, [Deputy of the regime’s Supreme Court and President of the Supreme Disciplinary Court of Judges] and [Mostafa] Pour-Mohammadi [former Minister of Justice] should be held accountable and face justice for playing a direct role in this massacre. Since the execution is indispensable to this criminal regime, any serious campaign or action against the death penalty, underlines the necessity of the regime’s downfall. This will be achieved by T [MEK’s] Resistance Units. We support the abolishment of the death penalty as articulated in the third item in Mrs. Rajavi’s Ten-point-Plan for the future of Iran.”

#MEK #Iran: Amnesty International Attacked for Investigating 1988 Massacre. Horrifying crimes against humanity in recent times. To make matters worse, the regime has never been held accountable for this crime.https://t.co/vy067PTYzV

“Within the last 40 years, the inhuman regime’s countless tortures and executions, have brought about the darkest era of Iran’s history. Appointing one of the main perpetrators of the 1988 massacre, Ebrahim Raisi as the Judiciary Chief, who proudly defends his crimes, is disgraceful. The regime’s crimes include the torture and executions of 1981-1988 and the recent executions in Isfahan and Shiraz prisons, as well as the endless line of the detained young protesters of the recent uprising marching toward towards the gallows. The regime’s atrocities in different prisons across Iran in using the death penalty, make us more determined to say ‘NO’ to torture and execution in the future of Iran.”

Without doubt, the Iranian people will achieve victory in the struggle to topple the mullahs and the regime’s leaders will face justice for their crimes against humanity. That day will certainly come#IranRegimeChange #FreeIran2018 #1988Massacre #Iran pic.twitter.com/K2yeaRrC3m

Lastly, In Gohardasht prison, in the west of Tehran, prisoners issued a collective statement at the beginning of October describing the regimes oppressive measures to create an atmosphere of fear:

“Iran is repressed and shackled. To preserve their ominous rule, both the mullahs’ and Shah’s regimes have been denying the Iranian people their basic right to life, and have sent the best men and women of this country to the gallows. The mullahs’ inhuman regime, like its predecessors, uses execution as a tool to oppress people’s rightful protests and uprisings. All the while, the shackled Iranians see their dreams, namely freedom, and democracy, which is repressed by the mullahs’ regime, is revived in vanguard resistance movement embodied in the MEK and led by Mrs. Maryam Rajavi, the President-elect of the National Council of Resistance of Iran.”