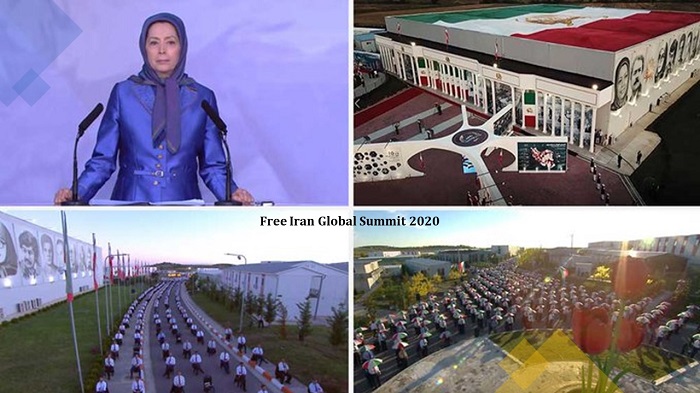 On Sunday, July 19th, the National Council of Resistance of Iran’s (NCRI) global virtual summit discussed the 1988 massacre of political prisoners in Iran.

Its call, which has been repeated many times, is for those responsible for the deaths to be tried for crimes against humanity at the International Criminal Court in the Hague.

Many of the 30,000 killed were members or supporters of the People’s Mojahedin Organization of Iran (PMOI / MEK Iran). Despite repeating these requests for justice through an international campaign by the NCRI President Maryam Rajavi, even 32 years later there is a lot still to achieve.

As a once incarcerated political prisoner, she reported that female prisoners were treated like animals and were raped by the regime’s guards. Now that she lives in Ashraf she says that the conditions in the camp were nothing like reports in the western media as she would never have stayed so long.

She said: “The world must know what happened to the (PMOI / MEK Iran) in the past 40 years. European leaders should know when they shake hands with Iran’s regime, that they must remember the suffering of the Iranian people.”

He was imprisoned twice with her mother due to her mother’s political activism and her father had been massacred. She said the trials were short and the 30,000 who took part bravely claimed their support for the MEK which led to their deaths. She praised the work of Maryam Rajavi and promised to continue fighting for a Free Iran.

He was imprisoned and his father was one of the 30,000 who was executed. He said: ‘’We will continue our struggle for Iran’s people. The sacrifice of the prisoners will not be in vain.”

He was imprisoned but managed to escape. He said “They wanted me to name (PMOI / MEK Iran) members. I didn’t, so they said my death sentence would be carried out within a few days on the charge of Moharebeh or waging war on God.”

He said, “if the regime is not stopped, then torture and execution will continue in Iran.’’

I am thankful to all lawmakers, parliamentarians, and hundreds of political dignitaries from around the world who joined the Free #Iran Global Summit. #FreeIran2020 https://t.co/rNVldOThGV pic.twitter.com/AhjrJoIfVp

The right policy can be summed up in a single word: firmness. That means firmly dispensing with everything that enables the regime’s terrorist activity, and firmly responding to every single criminal act. #FreeIran2020 #Iran pic.twitter.com/1firQejYKO

As a former Colombian Senator and the presidential candidate she said the following:

As a British human rights lawyer, and ex-UN judge, he had the responsibility of investigating the 1988 massacre including the interviewing of 40 survivors. He described it as “the worst crime against humanity since World War II” and that the perpetrators should be held accountable,

Giulio Terzi, the former Italian Foreign Minister, said the action was needed now because the mullahs are intent on starving, abusing, and terrorizing the Iranian people. He mentioned that Iran’s embassies were the hotbeds for terrorist activities and he mentioned the ambassador stationed in Vienna called Asadollah Assadi, who was responsible for the foiled bombing of the Free Iran Summit in 2018 in Paris should be prosecuted for the crime.

As a British MP, He talked about the regime’s ongoing campaign to demonize the (PMOI / MEK Iran) and this was connected to the1988 Massacre which the regime has endeavored to cover up.

As a previous European Parliament vice-president, he said that what took place at the 1988 massacre was still hurting the victim’s families and they have never had any compensation for their loss. “All the perpetrators of this crime will be held accountable in international courts.”

As the former head of the UN Advisory Mission for Iraq’s Human Rights Office, he said: “The crime committed against political prisoners in the 1988 Massacre has been well established and documented. The UN and relevant institutions have been informed and received documents on this issue.” He emphasized that the UN was doing little and had only asked the Iranian regime to conduct their investigation which they never did and they would not allow former Human Rights Commissioner Zeid Hussein to enter the country.

As former US Assistant Secretary of State for Military Affairs, who was responsible for the investigation into the (PMOI / MEK Iran) to find out if it could be taken off the USA’s terror watch list gave the green light for the removal.

He said: “Iran’s regime sees the Free Iran 2020 events and knows that the NCRI and (PMOI / MEK Iran) are fully capable, more than anyone else, of organizing a peaceful transition of power after the mullahs’ fall.”

As former Norwegian MP Lars Rise advocated trying the perpetrators of the 1988 Massacre to an international tribunal. He then condemned the stupid lie that the (PMOI / MEK Iran) is not at all popular amongst the Iranian people and the international community needed to wake up.

As a British lawyer, he said that Iranian officials “must be sanctioned for human rights violations” and that they should be prosecuted by the international community for their crimes.

As former Palestinian Chief Justice, he emphasized that the Iranian regime is simply using Islam as “a cover” and advocated that the mullahs should face the courts and be prosecuted.

He said: “We must work together so this regime does not remain in power.”

As a former US Ambassador to the UN Human Rights Commission Ken Blackwell, he has suggested that everyone should be united to denounce the regime and the terrorist activities its mullahs have been involved in.

He said: “By supporting Iran’s people, we give humanity and freedom a fighting chance. “

As the former UK Speaker of the House of Commons, she was full of praise for Maryam Rajavi’s ten-point plan for a Free Iran.

She said: “This provides a democratic alternative for future generations of Iran and gives women a chance to lead their country. This is what we’re fighting for.” She demanded that the British government recognize Maryam Rajavi as the real representative of Iran.

As an Italian senator, he emphasized the need to extend the arms embargo against Iran after its expiry date in October. He said that Iran has no respect for international laws and doesn’t keep its distance from other countries and also cheated on the 2015 Joint Comprehensive Plan of Action (JCPOA).

As a US senator, he said: “We must do this for international peace and security and to support the Iranian people in their struggle for freedom and democracy.”

As a respected American civil liberty lawyer, he referred to the regime as “the most serious human rights violator on this planet.’’ He said all should focus on Iran and believe in the MEK. If you care about human dignity, human rights, civil life, join the current campaign against the regime in Iran. The world, the people of Iran need a regime change.’’

As a Belgian MP, he mentioned that the trial of the Iranian regime’s terrorists is soon to begin, “Men and women are rotting in cells because they have a different opinion. This must not be tolerated in the 21st century. I wish you victory in your struggle for human rights in Iran.”

As a senator and the last speaker of the day, he said, “The Iranian people deserve to have democracy. The greatness of Iran is still ahead of us and we will achieve it with freedom and democracy.…….the people of Iran deserve it.”