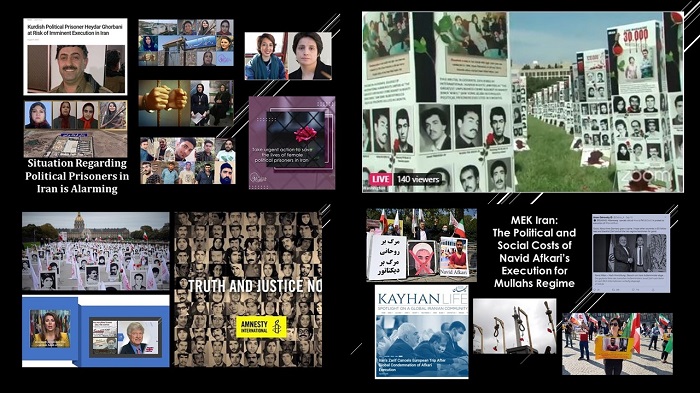 Twenty-seven-year-old wrestling champion Navid Afkari was executed by the Iranian regime earlier this month. International attention was drawn to the case when it became clear his execution may happen imminently. World sporting organizations, global sporting champions, and officials from a number of countries called on the Iranian regime to spare his life.

The execution of #NavidAfkari will only fuel the flames of the Iranian people’s fury and will send the mullahs’ rule to the dustbin of history.

Despite this, he was hanged. His crime was to participate in a major protest in which the people were calling the regime out for its economic mismanagement and corruption that has destroyed the lives of the people.

After his arrest, he was subjected to weeks and weeks of physical and psychological torture. He was beaten very badly and he had a plastic bag put over his head until he was on the brink of suffocating to death, for example. He was tortured into falsely confessing to a murder that he did not commit, and this was used against him in his trial. Furthermore, this so-called confession was broadcast on state television which the Iranian authorities have used to point to his supposed guilt – despite any shred of actual evidence existing.

The number of executions taking place in Iran is alarming and Iran is the top executioner per capita in the world.

#MaryamRajavi (#NCRI): Once again, I call on the international community to take urgent action to release the Afkari brothers, other detained protesters, and all political prisoners who are in danger of being executed.https://t.co/BDAp0zL80O

In a statement earlier this week, several UN rights experts denounced the regime for executing Mr. Afkari, saying that it is “highly disturbing” that the authorities in Iran have executed a man “as a warning to its population in a climate of increasing social unrest”.

The appeals made to overturn the death penalty against Mr. Afkari were unsuccessful, with the Supreme Court upholding them only a few months ago. Many human rights experts have expressed their alarm at the unusually quick process.

A researcher has said that Iran could potentially have gone ahead with the execution so as not to appear weak and vulnerable. Tara Sepehri Far added: “There has also been a growing anti-death penalty movement inside the country against the sentences issued in connection to the protests. I think they might fear that if they don’t show force they appear weak.”

Yet the public’s outrage grows at the continuing incompetence of the regime, the state of the economy, corruption which is rife within the government, and the suppression of freedom in the country.

The mullahs’ regime in Iran is running scared at the upsurge in dissent in the country. Apart from issuing death sentences and executing prisoners, it has now embarked on anyone it thinks is a supporter of the People’s Mojahedin Organization of Iran (PMOI / MEK Iran) across the country.

The case of Navid Afkari, an Iranian wrestler on death row, is part of a systematic pattern in which Iranian authorities disregard torture allegations and use coerced confessions in trial proceedings. https://t.co/ELU7vsrDUk pic.twitter.com/xkRrXejwJ4

Other experts have posited that the regime went ahead with the execution in such a rushed manner because of Mr. Afkari’s condition. The man had been tortured extensively and the regime failed to comment on these accusations. It is possible that they executed him before anything further about the regime’s mistreatment and torture could be revealed.

Mr. Afkari maintained his innocence right up to the end. He filed a complaint with the country’s judiciary last September because of the false confession he was forced to give under torture. After his execution, a recording of Afkari saying that he had “all kinds of documents” to prove his innocence went viral.

The Iranian regime has become more and more reliant on torture and the execution of political prisoners. Part of the reason for this is because the regime has never been held accountable. The international community has largely kept silent on Iran’s human rights abuses, but now is the time for this to change.

Mrs. Maryam Rajavi, the President-elect of the National Council of Resistance of Iran (NCRI) made the important point that “silence and inaction give a green light to and are construed as complicity in these crimes.” She called on the international community to request the Iranian regime released the Afkari brothers who were detained also for political reasons and all political prisoners who may have to face the death penalty.