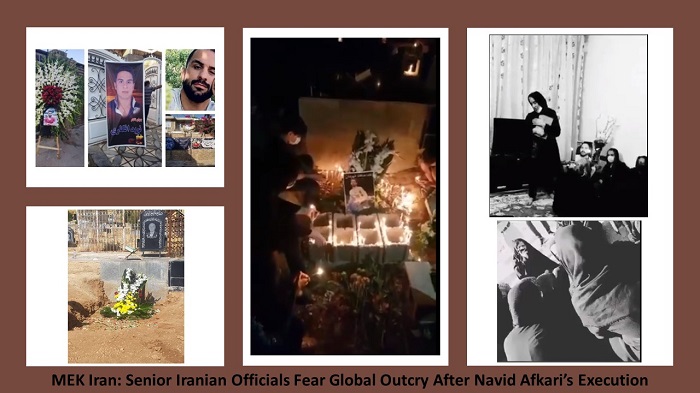 Raisi, who heads the Iranian regime’s judiciary, showed how concerned he was about the response to Navid Afkari’s untimely execution. He believes they are just agitational and should not stop the judiciary from making its own decisions on the fate of political prisoners.

Ali Bagheri, who holds the position as judiciary deputy in international affairs, is also worried about the number of demonstrations and protest rallies that have taken place around the world organized by People’s Mojahedin Organization of Iran (PMOI / MEK Iran) supporters. He was so callous that he couldn’t understand why Europeans saw Navid’s execution as a breach of human rights.

Ali Bagheri, judiciary deputy in international affairs, also expressed concerns regarding the large number of demonstrations and rallies held by supporters of the #MEK in numerous countries protesting the horrific execution of Navid Afkari. “ pic.twitter.com/yxOh0mTV0m

There are 30 prisoners being lined up to be executed according to Hassan Younesi, one of Navid’s lawyers. It appears that before Navid met his demise, his lawyers were trying to get a pardon, then all of a sudden they heard he had been executed. Under the regime’s own laws, notice is required to be given before an execution takes place.

The regime is so callous after the regime’s Ministry of Intelligence and Security (MOIS) harassed and threatened Navid’s father, mother, and two brothers in Sangar Shir village of Shiraz only gave permission to bury his body at night with hardly anyone being allowed to attend. They wouldn’t allow mobile phones because they thought this crime against humanity would get on to social media. All this rigmarole to eliminate this young man for simply exercising his democratic right to take part in a protest in 2018 is indeed alarming.

Navid was able to express his feelings in an audio recording prior to the execution and what he did say was, ‘’I never faced an unfair opponent, because wrestling is a sport of fairness. But for two years, I and my family are facing injustice, the most unfair of opponents in human history.”

#NavidAfkari's sister and mother can be seen at his grave.
His mother kisses his picture to bid him farewell.
Translation to song: "Tulips blossom from the blood of the youth of our homeland."

RIP Navid and all those fallen in the name of freedom for #Iran #StopExecutionsInIran pic.twitter.com/RpgqEhGoZA

Despite the regime’s presence of its security and intelligence agents, many young people from Shiraz went to the Sangar village cemetery and put candles and flowers on his grave.

When Navid was arrested in 2018 in Shiraz, he was eventually sentenced to death after being tortured, which made him confess to crimes that he had not done. Unfortunately, when the MEK, the main Iranian opposition, voiced its objections to Navid’s pending execution, world leaders sat on the fence as they feared that their “political and economic interests” in relation to the Iranian regime would be under threat. This meant the regime did not fear what it was doing.

Mrs. Maryam Rajavi, the President-elect of the National Council of Resistance of Iran (NCRI) made the important point that “silence and inaction give a green light to and are construed as complicity in these crimes.” She called on the international community to request the Iranian regime release the Afkari brothers who were detained also for political reasons and all political prisoners who may have to face the death penalty.

The UNSC, its member states, the @UNHumanRights, the UN High Commissioner for #HumanRights, the EU &all int’l human rights authorities must take practical, effective measures against the regime in #Iran for the execution of #NavidAfkari & 120,000 political prisoners. pic.twitter.com/wCBlMOPSl9

The abridged article was written by Matin Karim, reporting on behalf of the PMOI/MEK.