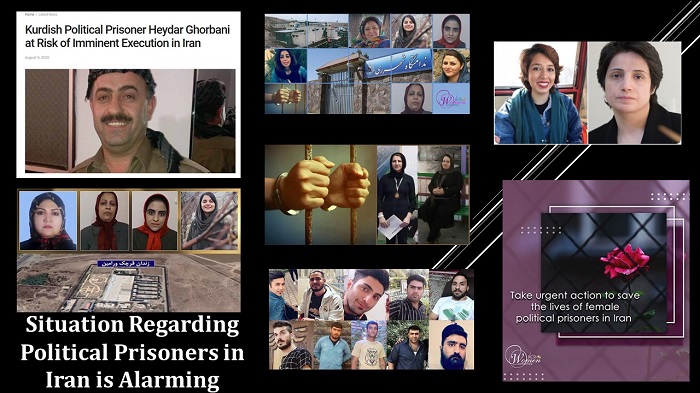 The mullahs’ regime in Iran is running scared at the upsurge in dissent in the country. Apart from issuing death sentences and executing prisoners, it has now embarked on anyone it thinks is a supporter of the People’s Mojahedin Organization of Iran (PMOI / MEK Iran) across the country.

The international community has failed to act on the gross injustices imposed by the regime on The(#PMOI / #MEK) supporters and their families. The fate of those arrested has often been the death penalty.#Iran https://t.co/LgohlLVZcY pic.twitter.com/Z4e7H1Lj6K

Brief details of seven of the detainees are given below:

45-year-old Zeinab Hamrang, from Ardabil, has been transferred to Evin Prison in Tehran after his arrest by MOIS agents in Khoy in September this year.

61-year-old Esmail Kazemzadeh, from Sarab, was rearrested by the regime’s forces at his Sarab home in mid-August.

35-year-old welder, Vahid Papi, from Andimeshk was arrested in August this year.

64-year-old Pour-Eshraq, from Narmak, was arrested in August. She has other members of her family who were killed as MEK martyrs in 1983 and 2003 by regime forces. She is being held in Evin Prison.

39year old, Esmail Namazi, was arrested in Behbahan in June this year.

47year old Khadijeh (Yalda) Emamdoust from Ilam was arrested back in June this year.

According to a statement by the Women’s Committee of the National Council of Resistance of #Iran, lives of female political prisoners are in danger in the notorious Qarchak Prison in Varamin.https://t.co/P9wpd0wCve

Two thugs, hired by the warden of Qarchak Prison in Varamin, were used to brutally attack Forough Taghipour and Parastou Mo’ini, political prisoners at the prison. They used boiling water to try and scald the prisoners in the struggle. Other prisoners tried to intervene to protect Taghipour and Mo’ini.

It is the regime’s well-known method of subduing political prisoners by using torture and callous treatment. The fact that international authorities continue to turn a blind eye to Iran’s inhumane treatment of its own people allows the regime to continue unhindered.

The National Council of Resistance of Iran NCRI’s Women’s Committee had warned previously that “the lives of political prisoners Forough Taqipour, Parastoo Mo’ini, and Zahra Safaei are in serious danger. Zahra Safaei had previously received death threats from several hired inmates on June 13, 2020.” The Committee issued a statement on 24th August saying “on the orders of the prison warden of Qarchak, dangerous criminals have been sent to the ward where political prisoners are detained to incite fights and brutalize them.”

Recently, on orders of the prison warden of Qarchak, dangerous criminals have been sent to ward where political prisoners are detained to incite fights and brutalize them. https://t.co/zPR4NgZcBB#FreePoliticalPrisoners

There's an urgent need to take a stance on the grave human rights abuses by #IranianRegime. I asked the EP President to hold a debate on this important subject during the next plenary session. Unfortunately, for some political prisoners it will be already too late.#NavidAfkari pic.twitter.com/hB9wJnJPl8

The NCRI, as the umbrella organization of the Iranian opposition, has called on the U.N. Security Council, the Secretary-General of the U.N., the High Commissioner for Human Rights, and other human rights organizations to put pressure on the Iranian regime to release political prisoners in Iran. The situation of the political prisoners in Iran must be investigated by an international fact-finding mission. Many prisoners are being tortured and executed on the flimsiest of pretexts.

It is clear that as the political pressure increases in Iran, the regime will step up repression and intimidation within and outside the prisons. Its strategy rests on intimidating and frightening the Iranian people into submission. Yet the public’s outrage grows at the continuing incompetence of the regime, the state of the economy, corruption which is rife within the government, and the suppression of freedom in the country.

Mrs. Maryam Rajavi the President-elect of the National Council of Resistance of Iran’s (NCRI): Once again, I call on the international community to take urgent action to release the Afkari brothers, other detained protesters, and all political prisoners who are in danger of being executed.

Silence and inaction give a green light to and are considered as complicity in these crimes.

A number of prisoners are on death row in Dastgerd Prison of Isfahan, the Great Tehran Penitentiary, the Central Prison of Mashhad, the Gohardasht Prison of Karaj, the Shaiban Prison of Ahvaz, the prisons of Urmia, Khorramabad, and Sanandaj, as well as a number of PMOI/MEK supporters in Evin Prison.