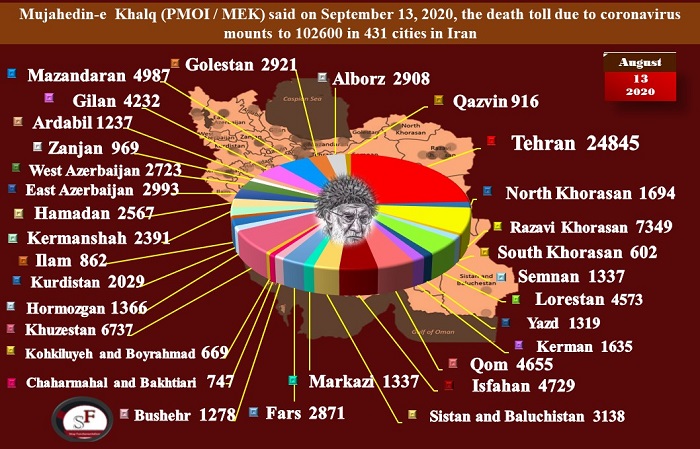 According to the main Iranian opposition, The People’s Mojahedin Organization of Iran (PMOI / MEK Iran), which claims to get its information from hospital sources and health system officials from 431 cities in the country, i.e. less than 50 percent of Iranian cities affected by the coronavirus, the number of victims has exceeded 102,600.

Meanwhile, the Iranian regime announced its official figure on September 13, 23157. Iranian authorities trying to conceal the extent of the tragedy.

Over 102,600 people have died of the novel #coronavirus in 431 cities checkered across all of #Iran’s 31 provinces, according to reports tallied by the Iranian opposition PMOI/MEK as of Sunday afternoon local time, September 13.https://t.co/UTkWHS0yV1

Several Iranian officials have in the past acknowledged that the official figures by the government represent only a portion of the reality of the devastation caused by the deadly virus in this most affected country in the Middle East.

For example, Mohammad-Javad Haghshenass, a member of the Tehran City Council, told the state-run daily Etemad Online on August 22: “We have seen that we are burying 120 to 130 people in Tehran’s Behesht-e Zahra cemetery [every day], while the number of deaths announced by the Ministry of Health for the entire country is equal to the number of people buried in Behesht-e Zahra”. He stressed that the intelligence services affiliated with the Revolutionary Guards had filed a lawsuit against him for trying to find out the actual number of victims.

For its part, the official daily Jahan-e-San’at claimed that it had been banned from publication by the Press Supervisory Board after quoting Dr. Mahboubfar, a member of the National Coronavirus Control Center, as saying that the death toll was 20 times higher than the figure announced by the Ministry of Health. However, the newspaper Vatan-e Emrouz had quoted Mahboubafar on May 30 saying: “The current figures on Coronavirus are 20 times higher than those announced by the Ministry of Health, and this has led citizens not to take this deadly disease seriously”.

On the basis of the declarations of the Iranian authorities, the figure of 102,600 deaths put forward by the Iranian opposition remains a rather cautious assessment compared with the reality of the crisis.

“Our estimate is that, so far, 25 million Iranians have been infected by this virus”, Iran’s President Hassan Rouhani told the National Pandemic Committee last month. Referring to a report from the Ministry of Health, he warned that “30 to 35 million” more people are at risk of contracting the virus, suggesting that authorities hope that “herd immunity” will help to contain the virus in the country.

Following an interview with an #Iran #COVID19 official who questioned the regime's death toll, Jahan-e San'at Daily was suspended by the regime.
Dr. Mahboubfar had told the daily that the regime "had engineered" the figures since day one for "political and security reasons". https://t.co/PpportcizD pic.twitter.com/eJ1tdzXYC1

The world average mortality rate for Coronavirus, as indicated by the WHO, is 4%, not to mention the structural inadequacies of the regime’s health system that have contributed to aggravating the situation. This gives a sense of what to be expected of the scale of the tragedy in Iran.

Minou Mohraz, the member of the CNLC, declared on June 6 at the Khabar Fori website: “Currently, about 20% of the total population of our country has contracted this virus, and according to the World Health Organization, at least 40 to 70% of the population will catch this disease”.

For molecular epidemiologist Emma Hodcroft of the University of Basel, such a level can be significant because it is considerably higher than elsewhere. “An HIV infection rate of 30 percent in one country, according to the figures given, would be by far the highest of all countries,” she said, pointing out that such a rate had only been found in highly affected areas like New York City, which has a smaller and more densely populated population than Iran. It is risky, she said, to extrapolate the results of serological tests to an entire population, especially if they come from a highly affected area.

The official newspaper Jahan-e San’at wrote candidly on April 8: “Quarantine is very expensive for the government of the Islamic Republic of Iran because it has to provide for the population and the government is reluctant to spend. The government is indifferent to the lives of its citizens … It does not believe in quarantine and the complete closure of the country, so it has endangered the lives of millions of people”.

“Following the economic crisis and the devaluation of Rial, the government, by choosing the strategy of collective immunity, hastened to relax preventive measures, lift all restrictions and put people’s lives at risk to prevent the resurgence of uprisings of 2017 and 2019,” said NCCT member Hamed Reza Mahboobfar in Jahan-e Sanat on July 9, 2020.

Iranian regime Sajjadi a Court judge discussed the role of (PMOI / MEK Iran) in the 2019 Uprisings in an interview with state-run television on June 4. Sajjadi revealed the regime’s fear of the (PMOI / MEK Iran) and their power to lead another uprising and suggested that the mullahs will follow in regime founder Ruhollah Khomeini’s footsteps in trying to eliminate the (PMOI / MEK Iran).

Indeed, the prospect of another wave of demonstrations across the country may explain the policies of a dictatorship that fears for its survival. The Khabar Fori website wrote on this subject: “Coronavirus is a time-bomb that could explode at any moment. The epidemic situation is getting worse every day in Tehran”.

The daily Mostagel also echoed concerns about an uprising that would undermine the clerical rule: “What worries Iran in the summer of 2020 are the urban riots. Given the widespread poverty, the Coronavirus epidemic, and the poor and destitute population for whom no solution has been found, we should be worried.”

The tragic coronavirus pandemic has cast a dark shadow over our nation for the past seven months. Khamenei, Rouhani, and the gangs ruling our country do not spend even a small portion of the hundreds of billions of dollars they have usurped from our nation.

Although the people of Iran are suffering suppression, torture, disease, and poverty, they have vanguards who are working round-the-clock to establish freedom, equality, social justice, people’s sovereignty & the freedom of choice for all Iranians from every creed and religion.