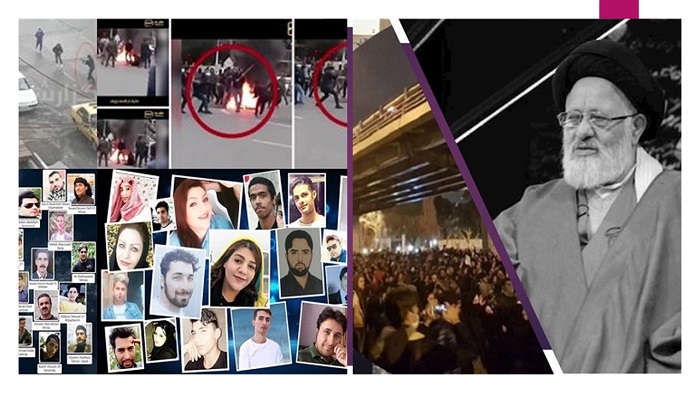 Is another storm brewing?

Over the past few months, government agencies have upgraded the security of their buildings, as if new things were about to happen on the streets of Tehran.

Naturally, with the advent of these events, the government departments feel insecure too. But the security measures will inevitably increase the confidence of top government officials. The historical experience will testify that government agencies will soon lose their grip on the protesting crowds on the streets. However, the Islamic Republic is upgrading the previous regime’s strategies to protect the entrances to the offices so that it may be able to escape the damage from the street riots with the same futile tactics.

A scene from November 2019 uprising, city of Shiraz, Karim-Khan Square:

In addition to the government offices, the country’s banks have been tasked to upgrade their security apparatus. They are employing new tricks in this regard. Banks are replacing their old surveillance cameras with new ones. New binoculars have extra technical features for documenting images so that they can better identify people’s faces.

Security measures are not limited to the extra protection of government buildings. Basij groups have also expanded their presence in office buildings more than ever before. The number of Basij employees is increasing every day, and more space in the offices is allocated to the Basij group. Apart from this, the Basij groups are being equipped with the latest administrative and military facilities. The procurement of a Basij base for each department is increasing, despite the reduction in government budgets. Both the regime’s security movements that are easily seen in the streets and neighborhoods and the escalation of the economic crisis and the intensification of dissatisfaction are signs of a resurgence of popular uprisings.

The Basij head commanders are appointed by the Revolutionary Guards. The commanders are fully equipped with an assortment of weapons. The commanders have more guns to be distributed among their members. The guns are stockpiled at the commander’s office. The commanders and their subordinates are taking part in more training courses. During their training, they become familiar with the various types of security and intelligence work within the administration and learn to divide the employees of each department into groups of supporters or opponents of the government. Even in the meantime, there is a place for passive employees.

In their training courses, Basijis learn how to monitor those who oppose the government within the building they are stationed. To achieve this goal, the Basij seeks help from its personnel. And so, this is how the government buildings have been transformed into military and intelligence bases for the regime’s supporters. At the same time, many batons and clubs have been stored in these buildings. All these are the steps being taken to crush any uprising that may take place.

These days, more attention is being paid to mobilizing neighborhoods. The number of clubs and batons allocated to each neighborhood has been increased. The neighborhood Basij units are well equipped, and everything is provided for them. All units, with no exception, have a complete computer system, computers that are equipped with all kinds of spying and information gathering software.

Although the local Basij units oversee their neighborhoods and the spying on them, all neighborhoods are also monitored from one level up. The reason for such mobilization is that Basij units are supposed to suppress any possible uprising.  In the regime’s mind, it’s easy to consider that this is a democracy, placing people against people.

For forty years of its life, the government has invented vulgar terms to praise this kind of repression and killing and continues doing so. These deceiving terms include the always-aware masses, the always-present masses, the party of God, supporters of the supreme leader, unknown soldiers…. All created with one purpose: deception. The Mullahs regime uses its destructive and covert forces to suppress social movements, and in this way, it does not even respect its laws. All these actions are conducted in secret and away from the public eye. These are intimidating tactics and the less the public knows about them, the more they are scared of them.

In cyberspace and along the way

“The enemy is using social media better than us. The internet is like a kitchen knife that you can use. The enemy can also use it to tear you apart.”

The words of Mullah’s regime Intelligence Minister Alavi in an interview with state TV. Alavi reflected the growing concerns of the mullahs over increasing activities of the People’s Mojahedin Organization of Iran (PMOI / MEK Iran) on social media.

After the general uprising in November of last year, the presence of the government policy in cyberspace has increased more than ever. In this way, the police have no respect for the privacy of the citizens.

Irresponsible police surveillance of social media has led to the arrest of hundreds of citizens every day on the pretext of “spreading rumors about Corona.” Apart from this, the police also use a network of traffic cameras for their security purposes. The expansion of the network is helping police to monitor public protests under the pretext of crime prevention.

Hassan Rouhani also endorsed such a move by the police during the protests in November last year. They take advantage of every scam to achieve their security goals. It is not without reason that police will need to set up new networks to monitor the city’s streets, to the extent that the traffic police, with all their overt and covert means, become a permanent appendage for the security police and the repressive special forces.

The failure of the government to respond to the needs of the people who participated in the nationwide protests last November has forced the government to employ new tactics in the event of possible future unrest.

The top executives, unable to respond to people’s social and economic needs, find themselves with only one choice: to continue suppressing people using batons and clubs. Even though more than forty years have passed since the start of the reign of this government, the suppression policy is expanding every day and is always presented to the citizens in different packages. The policy of “gathering-up” is always backed by the government’s baton and stick, which will eventually lead to the massacre of people in the streets.

On the other hand, the increase of thirty-one percent of liquidity and the increase of seventy-five percent of the price of foreign currencies over the past year have contributed to the sharp price increase of cars and home appliances and this has become a significant problem for ordinary families. On top of this, food and essential goods have risen by as much as 50 percent in recent months. Unemployment, due to coronavirus and sanctions, has also contributed to this dilemma for the regime. According to government statistics, more than 800,000 people are currently receiving unemployment insurance benefits from the Social Security Fund.

However, the number of unemployed in recent months is higher than these figures. More than 1.5 million people are said to have lost their jobs in recent months, and this group has never benefited from the Social Security Unemployment Fund. At the same time, unbridled inflation is hurting more and more people, forcing them into poverty and leading them to live in poor conditions on the outskirts of big cities. But the Mullahs regime believes that all such problems can be solved and crushed using batons and clubs. That is why the regime always boasts about its commanders who have acquired the skill of “gathering” people from the street.

The same commanders are promoted to top government jobs and may even become a speaker in the parliament. They owe their position and promotion to batons and clubs and their supreme leader, who is as illegitimate as they are.

Now, more than ever, people are preparing themselves for another uprising. On one side is the regime, with all its suppressive forces and on the other side, the people, who are unable to survive due to oppression. The people want to take power back from the government, but the government has no intention of accepting this popular demand. As time passes, we must wait for a storm, during which the citizens of the country, at their own and clear will, will insist on rejecting the regime.