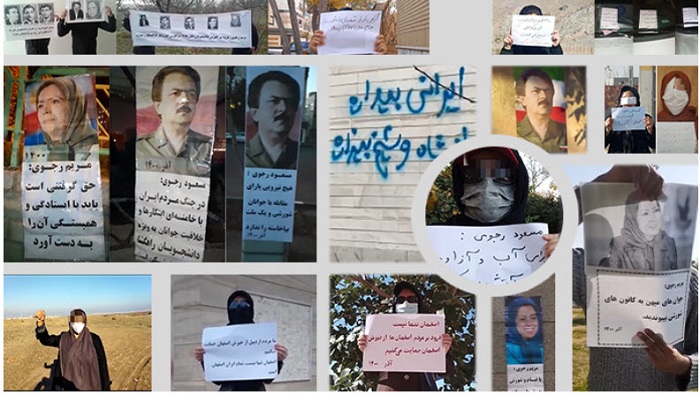 The expanding activities of Resistance Units, a network of activists supporting the People’s Mojahedin of Iran (PMOI / MEK Iran), are one of the regime’s biggest challenges. The Resistance Units, which have been increasing across Iran in recent years, have played a critical role in keeping the movement of the revolution alive and preventing the regime from fostering a climate of fear and repression.

Authorities in Shahrekord, Charmahal, and Bakhtiari Provinces dedicated a massive statue of Qassem Soleimani, the terrorist Quds Force’s eliminated commander, However, the Resistance Units set fire to the statue within a few hours, prompting the regime to cancel a number of ceremonies and festivities planned for the following days at the location.

On January 6, Mohammad Ali Nekonam, the Iranian regime’s supreme leader’s envoy in ShahrKord, issued a statement calling the torching of the statue “a crime” that “would strengthen Haj Qassem’s popularity among people.”Images and videos of Soleimani’s burning statue, on the other hand, were widely circulated on social media and news channels and were warmly received by Iranians and those in the region who had suffered greatly at the hands of Soleimani and the terrorist Quds Force.

The Resistance Units disrupted dozens of Iran’s state media network’s television and radio stations on January 27. Programs were abruptly halted at 3 p.m. local time and were replaced by images and sounds of Iranian Resistance leader Massoud Rajavi and President-elect of the National Council of Resistance of Iran (NCRI), Maryam Rajavi.

The disrupted sequence also aired visual and at times audio slogans of “Death to Khamenei” in a reference to regime Supreme Leader Ali Khamenei, and “Viva Rajavi.”According to reports from within the government, more than 600 TV and radio servers were taken offline and destroyed during the disruption.

“The owners of this technology could exploit and harm the backdoors and features that are installed on the systems,” Ali Dadi, deputy chief of the Islamic Republic of Iran Broadcasting (IRIB), said of the interruption. As the regime prepared to mark the 43rd anniversary of the mullahs’ ascent to power in early February, the Resistance Units unleashed yet another wave of activity.

On February 9, the Resistance Units exploited the public address system at Bazaar Reza, Mashhad’s major market, to broadcast anti-regime slogans like “Down with Khamenei, Viva Rajavi!”On the 15th anniversary of the 1979 anti-monarchical Revolution, Resistance Units in dozens of cities set fire to banners and posters of regime figures that had been placed in various locations.

“What has kept this illegitimate regime in power after 43 years is its practice of unbridled domestic crackdown. The religious dictatorship, with dozens of intelligence, military, and security institutions, has gone the distance to keep this notion of fear alive throughout the Iranian society that the regime is strong, and no internal or external force can stand against it.

“And the ‘Resistance Units’ are the sledgehammers that break this atmospheric crackdown. Each day in various parts of Iran, under a widespread network of surveillance cameras, right under the noses of thousands of overt and covert agents, they are groups of brave youths that take down the icons of this dictatorship. These Resistance Units are literally on the verge of bringing an end to the regime’s suffocating crackdown.