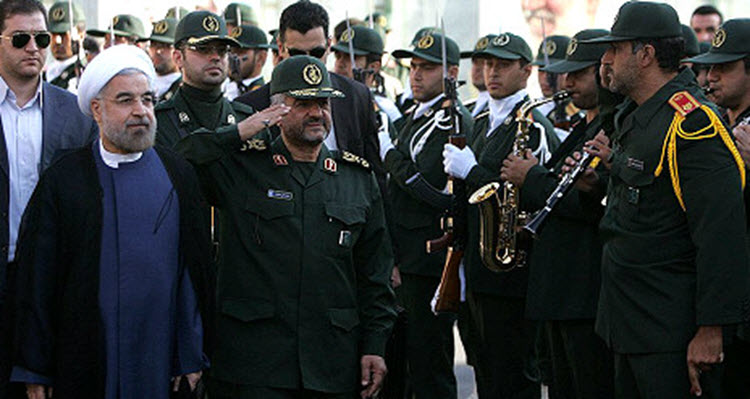 On April 18, Iranian President Rouhani, acknowledged that, “Figures show that in the eleventh government (his government) the budget of defense capability compared to the beginning of this government has had 145% growth and that means that in hard economic times, the government efforts were to further strengthen the country’s armed forces. The eleventh government is proud to have taken steps in three and a half years, from the armed forces’ strategic equipment and facilities viewpoint, equal to ten years prior to it.” He added, “The feature of our armed forces is that they have a commander in chief and this command is derived from Islam, Islamic jurisprudence, justice, and moderation.”

According to an article published by the National Council of Resistance of Iran (NCRI), in reality the percentage increase in the military budget is much higher. It would need to include the “Special payments to the Iranian Revolutionary Guards by Khamenei, Astan Qods Razavi and other organs affiliated with the Supreme Leader.” These payments are not taken into account in the official budget and reach tens of billions of dollars, say the NCRI. The military and security costs in Syria are also missing from the budget.  Additionally, “within the military and the security budget, the highest share belongs to the Iranian Revolutionary Guards.”

A look at the various budgets in Iran show that the military budget is 2.2 times higher than the education budget and more than 7 times higher than the health budget. Comparison of the nearly 70,000 billion tomans (~ $19 billion) for the official budget of military and security apparatus in 2017, with the budget of the Ministry of Education with 13 million students and a million teachers at only 31,000 million tomans ($8.4 billion), and the budget of the Health and Medical Education at about 9900 billion tomans ($2.67 billion) proves this to be true.

In a statement two and a half years ago, the Iranian Resistance revealed the report of Revolutionary Guard Ali Shamkhani, to the regime’s Security Council, after his visit to Syria. His statement said, “Khamenei has allocated to Syria the military and political budget and expense of a country and as such ‘Agha [Khamenei] has stated that Syria is our redline. Had it not been for the leader’s wisdom, everything would have been finished by now and in that case, we would have faced a calamity in Iraq and Lebanon and ‘even Tehran would have been affected.” (Statement of the Secretariat of the National Council of Resistance of Iran, October 12, 2014).

The budget increase for the IRGC is deplorable, while more than half of the Iranian people live below the poverty line. State-run media, on August 21, 2016 reported that according to the Deputy Minister of Health, 30 percent of the people are hungry and don’t have bread to eat.

The country faces a crippling recession. The central bank said the national growth rate, excluding oil, was less than 0.9 percent during the first six months of 2016.

On April 19, the NCRI wrote, “This is only a corner of the disastrous performance of the clerical regime that has plunged the economy into crisis. The only way out of this crisis is the overthrow of the religious fascism that seeks its survival in the suppression and export of terrorism and nuclear projects,” and adds, “Skyrocketing budget increase of the IRGC that has no other task than internal repression, and war and destruction in the region, especially Syria, Iraq and Yemen, once again proves this fact that different factions within the regime by whatever name have no differences in the suppression, warmongering and creating crises. The power struggle within the regime is over their share of power and a greater share of the plunder of the Iranian people assets.”