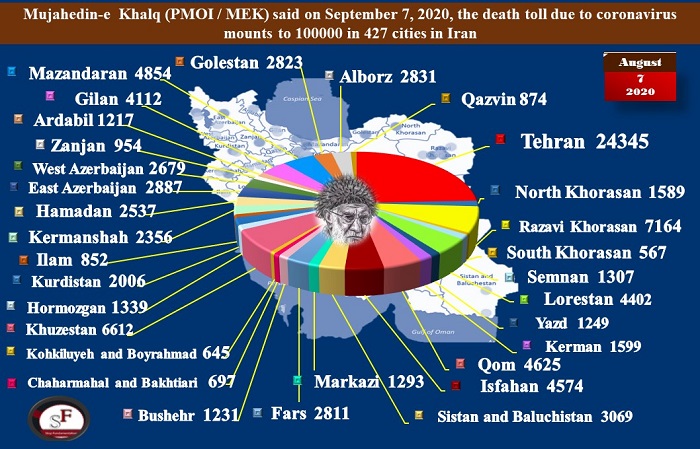 The Iranian regime is using the term ‘’bitter incidents’’ when referring to the uprisings that have taken place in the last couple of years.

According to reports by the People’s Mojahedin Organization of Iran (PMOI / MEK Iran), The tragedy of the novel coronavirus in Iran passed a milestone. At least 100,000 Iranians have so far perished from COVID-19.

More than 100,000 people have died of the novel #coronavirus in 427 cities checkered across all of Iran's 31 provinces, according to the Iranian opposition PMOI/MEK.

It has now got to the point that the COVID-19 outbreak and the way the Iranian people have been treated is likely to lead to more “bitter incidents.” It is not just the people who are feeling angry but even the regime’s own health advisers are protesting about the regime’s order to reopen schools.

The state-run media is now terrified that this reopening and putting more people at risk of developing COVID-19 will mean that more protests are inevitable. What has angered the media, even more, was the fact that Iranian President Hassan Rouhani did not even bother to turn up for the reopening ceremony.

Comments made by media outlets include the following:

The Iranian regime is using economic necessity as the key reason for reopening educational campuses. It says that sanctions are the main cause. However, a shortage of cash is more due to corruption and the theft of the nation’s wealth. This has been questioned by the state-run Arman daily, which is asking where the $18 billion that Turkish President Erdogan said, in his parliament, “came from Iran and God sent it to us” actually did come from?

The Mostaghel daily recently reported that it is disappointed that the government failed to help the people through the pandemic because it was revenge for the protests that took place against the regime last year. It says: “the nation will not forget how it was abandoned during these bitter days. This will affect the upcoming incidents. Because soon, people will come to their table for eating, and their despair of an empty table will lead them to protest on busy streets.”

#Iran: The staggering #Coronavirus death toll in 427 cities exceeds 100,000- This tragedy is the result of Khamenei and Rouhani's policies. They will cause a greater tragedy by reopening schoolshttps://t.co/ZtOseHoC8D pic.twitter.com/dx9zzzuV2T

Mrs. Maryam Rajavi the President-elect of the National Council of Resistance of Iran’s (NCRI): The staggering Coronavirus death toll in 427 cities exceeds 100,000- This tragedy is the result of Khamenei and Rouhani’s policies. They will cause a greater tragedy by reopening schools.