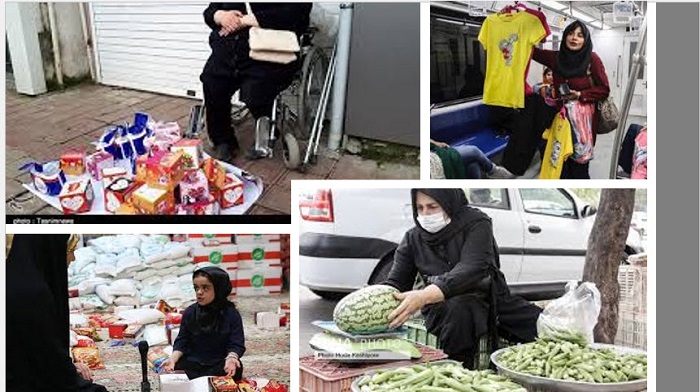 Women heads of households in Iran are an oppressed and suffering stratum of Iranian society. They are the oppressed class, bearing the heavy burden of the family on their own and being overwhelmed by various family, economic, and social problems.

During a series of meetings at Tehran University’s student club, Ensieh Khazali, the directorate for Women and Family Affairs, explained a few observations about women and families.

women heads of households in Iran. There were three million at the start of the Sixth Development Program.” On June 21, the official IRNA News Agency reported that “Some self-supporting women have been added to this number during this period.”

“Some 12 percent of the more than 900,000 women in Golestan province are heads of households and in urgent need of help finding employment,” Azadeh Rajabi, Director of Women and Family Affairs in Golestan Governorate, told IRNA News Agency on February 24. “According to the 2016 census, Golestan Province has 1.869 million people, 49 percent of whom are women.”

The skyrocketing rise in the price of basic goods has resulted in a significant decrease in the purchasing power of many Iranian households, particularly those in the middle and lower classes. As a result of this issue, many families, are carefully regulating their family expenses.

In addition to economic devastation, low purchasing power has resulted in a slew of mental health issues. Women heads of households in Iran have experienced an increase in mental illnesses such as depression in recent years, which has had negative consequences.

“The greatest pressure to adjust the household’s income is on the heads of the family,” he continued. Even if a family’s income is sufficient, heads of households must deal with the pressures of adjusting to rising costs. This is true even when both men and women are working because the gap between daily expenses and incomes of middle- and lower-class households in our country is growing by the day.”

Economic disasters and rising living costs caused by the regime’s policies have left many Iranian families with insufficient income. In other words, many Iranian households’ incomes do not cover their expenses, and the stress causes psychological harm to household heads. The stress caused by these factors causes some people to use drugs or commit suicide, increases domestic violence, and causes irreversible family and social harm.