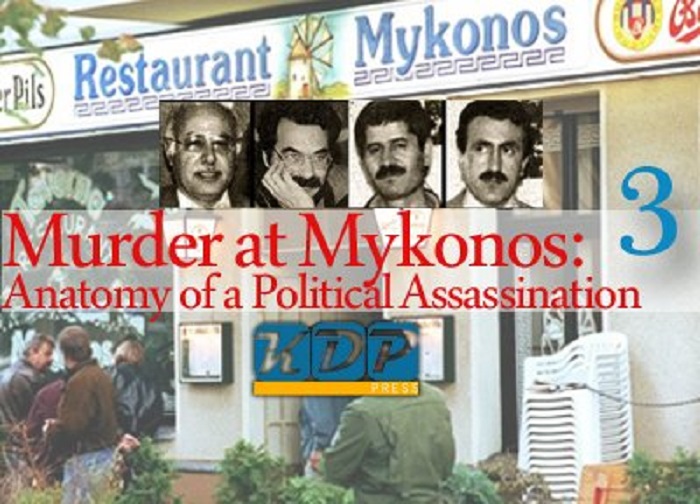 Sadegh Sharafkandi, an Iranian-Kurdish opposition leader, was assassinated along with his assistants and translator at the Mykonos Greek restaurant in Berlin, Germany, on September 17, 1992. The ayatollahs were implicated in the incident, which prompted local authorities to initiate an investigation.

A German court found Kazem Darabi, an Iranian grocer in Berlin, Abdolraham Banihashemi, an Iranian intelligence officer, and Lebanese citizen Abbas Hossein Rhayel guilty of murder and sentenced them to life in prison during the trial, which began in October 1993.

Youssef Amin and Mohamed Atris, two additional Lebanese, were found guilty of being accomplices to murder.

The court issued an international arrest warrant for Iranian intelligence minister Ali Fallahian on April 10, 1997, after determining that he had ordered the assassination with Khamenei and Rafsanjani’s knowledge. For months, the trial caused diplomatic tensions between the Islamic Republic authorities and various European countries.

Despite the international and domestic outcry, German authorities freed Darabi and Rhayel in December 2007. At the time, Iranian observers criticized the German government for providing an irrational incentive to the world’s leading state-sponsor of terrorism, effectively paving the way for further terror strikes on European soil in the years to come.

Since then, German intelligence agencies in states such as Hamburg and North Rhine-Westphalia have raised concerns about the Iranian Ministry of Intelligence and Security (MOIS) espionage and surveying operations against dissidents, particularly members and supporters of the main opposition, the National Council of Resistance of Iran (NCRI) and the People’s Mujahedin of Iran (PMOI / MEK Iran)

The Bundesamt für Verfassungsshutz (BFV), the Federal Republic of Germany’s domestic intelligence service, also wrote about the Iranian government’s actions in Germany and other EU nations in its 2019 annual report on the Protection of the Constitution, which was published on July 9.

“Spying on and fighting the opposition movements and actors at home and abroad continue to represent the priority areas of work of the Iranian intelligence services. In addition, the facilities in western foreign countries collect information from the fields of politics, the military, and business and science,” according to the report.

“As already stated in the Constitution Protection Report 2018, a diplomat accredited to the Iranian embassy in Vienna (Austria) was arrested in Germany on July 1, 2018, based on a European arrest warrant issued by the Belgian law enforcement authorities. As the full-time employee of the MOIS, he is accused of being the string-puller of a planned explosive attack at the annual meeting of the ‘Mojahedin-e Khalq’ (MEK) in Villepinte near Paris (France), on June 30, 2018.”

The Iranian diplomat led a Belgian

“In this context, the Iranian diplomat led a Belgian couple of Iranian descent as agents and commissioned them to carry out the crime.

The suspect was extradited to Belgium in early October 2018. In addition to the MOIS, the Quds Force of the Iranian Revolutionary Guards, which also operates in secret, is active in Germany,” the report added.

Targeting opposition organizations around the world

Iranian authorities have been relentlessly targeting opposition organizations around the world in recent years. Tehran has stepped up terror plots in a number of European nations, including Albania, France, Denmark, and the Netherlands, since 2018.

The IRGC has launched a series of drone attacks on Iranian-Kurdish factions in Iraq’s Erbil province in the last week. “Iranian warplanes, drones, and artillery targeted several locations in the Sidakan and Choman areas of Erbil province where several Kurdish opposition groups have small bases on September 9,” as per Rudaw.