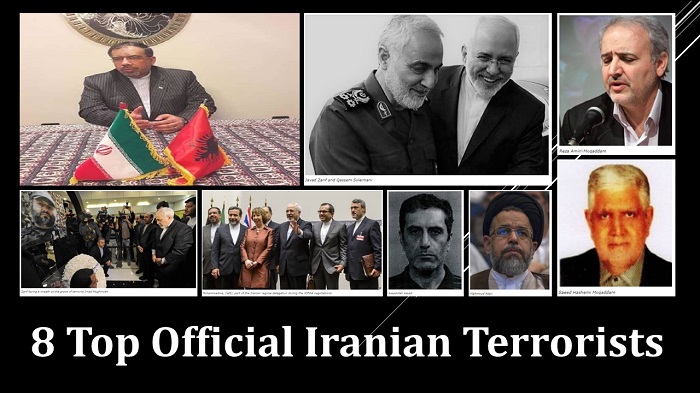 The  People’s Mojahedin Organization of Iran (PMOI / MEK Iran) and the National Council of Resistance of Iran (NCRI), reported that following the signing of the Joint Comprehensive Plan of Action (JCPOA) in 2015, the Iranian regime launched a new wave of terrorist actions against Iranian dissidents.

This report identifies some of the most important agents of the MOIS and Foreign Ministry who were involved in the two terror plots in 2018.

Following below is a list of intelligence agents linked to the 2018 plot targeting the Free Iran gathering by the  People’s Mojahedin Organization of Iran (PMOI / MEK Iran) and the National Council of Resistance of Iran (NCRI) President-elect Mrs. Maryam Rajavi in Villepinte, France terrorist case currently under investigation in Belgium.

Mahmoud Alavi has been the regime’s Minister of Intelligence since 2013, and all of the terrorist operations overseas, including terrorist plots in March and June 2018 took place under his supervision.

In the terrorist plots both in Albania and Villepinte, Paris, the commanders, Mostafa Roudaki and Assadollah Assadi, respectively, were diplomats of the regime’s Foreign Ministry under the supervision of the Foreign Minister who provided logistical support for the execution of these two plots.

Zarif, when referring to protesters who wanted him expelled from Sweden, said: “These individuals who are standing outside, ask them to participate in any meeting of Iranians, and see if they can still be alive. They won’t be alive for a minute.” ………. “They cannot even operate in Iraq because the people of Iraq would eat them alive.” On September 2nd, 2019, Zarif said that “Commander Soleimani and I have never been at odds with each other. We have been closely working together for over 20 years.” Following the death of Soleimani, Zarif said: “Martyr Soleimani destroyed what was built by the US. The pure blood of Commander Soleimani will certainly strengthen the tree of resistance…. This [elimination] was an act of state terrorism.’’

He is one of the regime’s Supreme National Security Council officials. He is also the present head of the Foreign Intelligence and Movements Department of the MOIS, which supervises MOIS stations in the regime’s embassies in different countries. When it comes to the terrorist plot against the opposition gathering on June 30th, 2018, he was the overall commander. In order to execute this plot, he traveled to Austria and worked together with Assadi on the terrorist operation.

On October 2nd, 2018, the French government put Saeed Hashemi Moqaddam on its terrorist list and froze all of his assets because of the role he played as the commander of the Villepinte terrorist plot. The French government described Hashemi Moqaddam’s role as the Deputy Minister and Director General of Intelligence. On January 8th, 2019, the European Union put him on its terrorist list.

Assadollah Assadi is a long-serving MOIS official and Station Chief of the MOIS in Austria, which is the main base of the regime’s intelligence service in Europe. He was arrested in Germany on July 1, 2018, and later extradited to Belgium due to the role he played in terrorist operations. He made a short visit to Tehran from June 19 to June 22nd, 2018, where he got the bomb and transported it to Vienna on an Austrian passenger airliner. The bomb plot, which could have caused many deaths and injuries, was intercepted at the last minute.

Reza Lotfi is located at the regime’s Foreign Ministry. Evidence indicated in the legal case in Belgium, in 2019, “Gholam-Reza Lotfi” visited the Belgian prison where Assadi is being held to meet with him.

Mostafa Roudaki was the MOIS Station Chief in Austria until the end of 2014 and was sent to Albania before the end of 2017 to replace Fereydoun Zandi Aliabadi as the MOIS Station Chief in the regime’s embassy. In December 2018, Roudaki was expelled by the Albanian government due to terrorist activities. In a statement released on February 5th, 2018, the Security and Antiterrorism Committee of the NCRI exposed Roudaki’s identity and said: “Following the mullahs’ regime efforts against the (PMOI / MEK Iran) in Albania, and deployment of intelligence and Quds Force agents to this country, the Ministry of Intelligence (MOIS) appointed Mostafa Roudaki, a veteran agent of MOIS, as the first secretary of the regime’s embassy in Albania.”