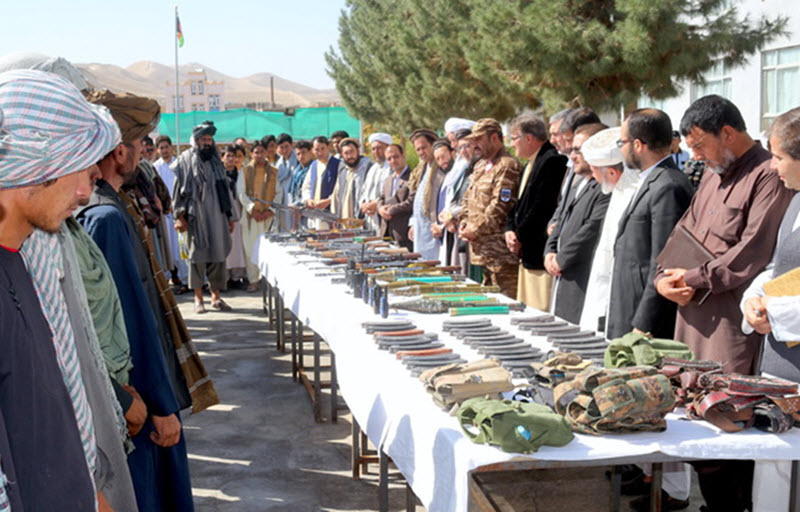 On Sunday, officials of Ghazni province announced that weapons they have seized from Taliban militants in the province which are made in Iran.

Security forces gained access to a Taliban hideout in a clearing operation on the outskirts of Ghazni city. According to Ghazni governor, Wahidullah Kalimzai, and police chief, Ghulam Daud Tarakhil, they recovered Iran-made weapons there.

“Around nine light weapons, which have been recovered by security forces are made in Iran,” the governor said.

“The weapons that you saw, which were very new, were in the hands of militants and are made in Iran. The weapons were brought here for the continuation of war,” the police chief said.

The Afghanistan Interior Ministry have begun investigations. Interior ministry spokesman, Najib Danish, alleged, “Security departments have started investigations and we do not have the final results yet. As soon as the results are finalized they will be shared with you.”

Iran has not commented on the issue, nor has the Taliban.

In a security meeting, commander of the 203 Tandar Military Corps, said the Taliban does not have the ability to confront the Afghan security and defense forces. “All their plans have failed,” General Dadan Lawang said.

However, in Paktika province, Ghulam Sakhi Roghliwanai, the police chief, said security forces in the province face a lack of weapons and ammunition.

The US Special Representative for Iran, Brian Hook, warned of an “accumulating risk of escalation” in the region if the United States fails to act. He told reporters, “Today we are unveiling Iran’s Sayyad-2 C surface-to-air missile which you see behind me. This missile was designed and manufactured in Iran and the writing in Farsi on its side translates as ‘the hunter missile’. The conspicuous Farsi markings is Iran’s way of saying they don’t mind being caught violating UN resolutions.” Hook added, ”Fajr rockets have also been added to the display and are located next to the anti-tank guided missiles. These weapons were recovered in Helmand, near Kandahar airfield, by the Afghan National Army from the Taliban. Iran has been providing material support to the Taliban since at least 2007. These same rockets have been used by Hamas in the past.”