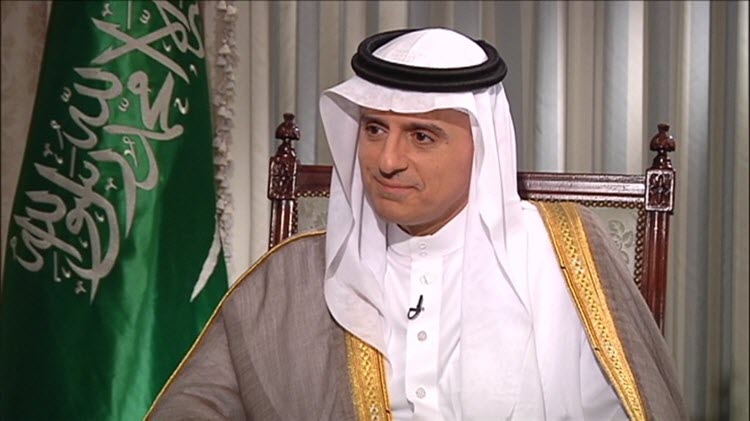 The Foreign Minister of Saudi Arabia, Mr. Al-Jubeir, has strongly condemned the Iranian regime and the international terrorist acts it carries out, as well as its support for the “murderous dictatorship” of Bashar al-Assad in Syria, reports the National Council of Resistance of Iran (NCRI).

In the Wall Street Journal he said that Iran cannot whitewash its record of terror and Tehran could enjoy better ties with Saudi Arabia if it severed all links with terrorism. He pointed out that Iran is the leading state-sponsor of terrorism and is responsible for several attacks since 1979 (suicide bombings of the U.S. Embassy in Beirut and the Marine barracks at Beirut International Airport, the Khobar Towers bombing in Saudi Arabia, embassy attacks in Iran and the assassination of diplomats around the world, to name a few).

He pointed out that Iran funds Hezbollah, whose secretary-general recently said that all their funding comes from Iran. Iran also makes and distributes IEDs that have killed and hurt thousands of American troops in Iraq and Afghanistan. More generally, Iran supplies weapons to terrorists and militias in the region.

Speaking about the situation in Syria, Mr. Al-Jubeir states that over half a million people have been slaughtered by Bashar al-Assad’s regime which is supported by Iranian forces which have been sent in to hold the Syrian regime up. He emphasised that “Iranian leaders have said publicly that if not for their efforts, Assad would have fallen from power”.

The world and region was at peace in 1979 until Ayatollah Khomeini’s Islamic revolution, said Mr. Al-Jubeir. The slogan was, and remains, “Death to America!” and the Mullahs vowed, as written in their constitution, “to export the revolution and spread their ideology through religious and sectarian conflict”.

The aim of the revolution, says Mr. Al-Jubeir, was to “spread their ideology through propaganda and violence”. He adds: “Iran went so far as to propagate that the Shiite Muslims living outside Iran belong to Iran and not the countries of which they are citizens. This is unacceptable interference in other countries and should be rejected by all nations.”

The ideology is driven by “an appetite for expansion, fueled by anti-Western hatred and motivated by sectarianism” and this has “energized and empowered extremism”. Mr. Al-Jubeir suggests that banishing this “toxic” mind-set will help combat sectarianism.

Last year the nuclear deal was agreed with the U.S., but the Iranian regime continues to blame others for the problems in the region. Problems that the regime created. However, the actions of the regime prove the Tehran is not serious about getting rid of terrorism and extremism.

“The rest of the Islamic world has unanimously condemned Iran’s behavior. In Istanbul in April, the Organization of Islamic Cooperation formally rejected and deplored Iran’s policies of sectarianism, interference in the affairs of others and support for terrorism,” said Mr. Al-Jubeir.

He highlights that Saudi Arabia is a “leader in the war against terrorism”. He adds: “My country brought the world together for an international conference in 2005 to align nations in the fight against terrorism. The kingdom contributed more than $100 million to create a global center for counterterrorism at the United Nations and established a 40-member Islamic Military Coalition to combat terrorism and extremism. It also is a member of the U.S.-led Global Coalition to Counter ISIL and is part of the coalition’s continuing military operations.”

He also points out that Saudi Arabia has foiled several attacks aimed at the U.S., and its leaders have been a target of suicide terror attacks. “The kingdom’s record is clear, and attested to by our allies and the international community.”

He ends the article by saying that Saudi Arabia’s position has remained constant with regards to Iran. Better relations with Iran would be welcomed “based on the principles of good neighborliness and noninterference in the affairs of others”. In other words, Iran must abandon its subversive and hostile activities and stop supporting terrorism. So far, he said, “Iran’s record has not been encouraging”.