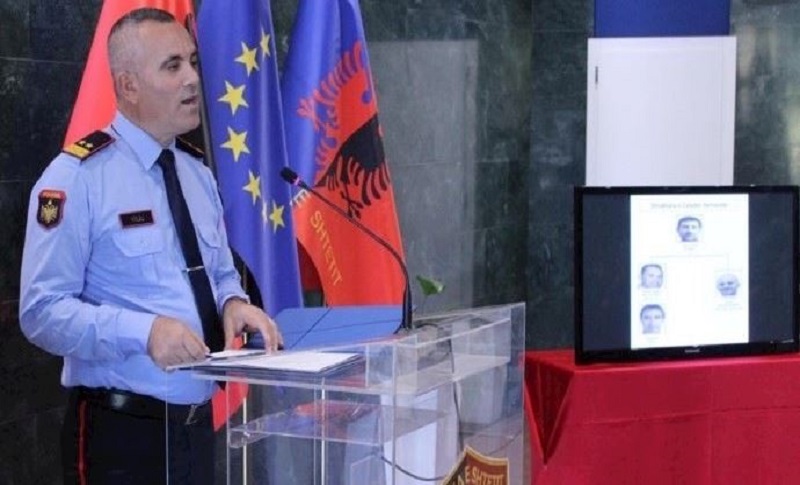 In a press conference on Wednesday, October 23, 2019, Albania’s Police Chief announced that recently a terrorist cell connected to the Iranian regime was uncovered.

The cell planned to launch an attack on the Iranian opposition movement, the Mujahedin-e Khalq (PMOI/MEK) based in Albania.

The cell was also responsible for planning a terrorist attack on an Iranian New Year (Nowruz) gathering organized by the PMOI/MEK in March 2018.

In its press conference, the Police Chief revealed new details on the incident which Albanian security services foiled in its final stages before implementation.

The March 2018 event was attended by Mrs. Maryam Rajavi, the President-elect of the National Council of Resistance of Iran (NCRI), Mayor Rudy Giuliani and other European and US dignitaries, as well as senior MEK officials.

Albanian Police Chief Ardi Veliu said the alleged cell leader’s family name is Peyman and described him as an Iran-based operative of the Quds Force.

“Peyman had sent another Iranian cell member, Alireza Nagha-Shazadeh, identified as a former MEK member with an Austrian passport, to Albania several times to gather information for a planned attack on the group,” he said.

“Since 2014, some 3,000 members of the People’s Mujahideen Organization of Iran (PMOI), also known by its Farsi name Mujahideen-e-Khalq (MEK), have settled in Albania after they were attacked in Iraq and now live in a camp near Durres, the country’s main port,” reported Reuters.

The statement by the police said the leader of the alleged cell “resides in Turkey” and another “has an Austrian passport.”

“A police statement alleged that two Iranian top security officials led the cell from Tehran. It also said the network was allegedly linked with organized crime groups in Turkey and used a former MEK member to collect information in Albania,” wrote the New York Times.

Arab News wrote that in January, the European Union sanctioned Iran’s intelligence services after accusing Tehran of being involved in plots to assassinate regime opponents in the Netherlands, Denmark, and France.

“Paris accused Iranian intelligence of being responsible for plotting a planned attack on a MEK rally north of Paris in June 2018,” reported Arab News,

According to Reuters, France said in October 2018 there was no doubt Iran’s intelligence ministry was behind a June plot to attack the NCRI’s annual rally outside Paris.

Tirana Times wrote that “the Quds Force is the operational wing of IRGC (Islamic Revolutionary Guard Corps), which operates beyond Iran’s borders and is by Qassem Soleimani, who is responsible, among others, for Iran’s activity in Yemen, Iraq, Syria, and Lebanon.”

Today the Albanian Police and authorities revealed more details about a terrorist plot against PMOI members in March 2018.
They show that all factions of the mullahs’ regime were involved in that plot. #Iran #NoImpunity4Mullahs #FreeIran

The Voice of America also quoted remarks by Mrs. Maryam Rajavi the President-elect of the National Council of Resistance of Iran’s, regarding the event.

“MEK leader Maryam Rajavi, who also heads the France-based National Council of Resistance of Iran (NCRI), responded on Twitter to Albania’s identification of the alleged cell by reiterating her call for Iran’s embassies to be closed and for the IRGC to be designated as a terrorist organization,” reported the VOA.

“Today the Albanian Police and authorities revealed more details about a terrorist plot against PMOI members on March 2018. They show that all factions of the mullahs’ regime were involved in that plot” said Mrs. Rajavi in a tweet.

“Once again, I repeat that the clerical regime’s embassies must be closed down and the IRGC and terrorist Quds force must be designated as terrorist organizations to prevent terrorist activities of this regime, emphasized Mrs. Rajavi.

“It is worth noting that Assadollah Assadi, the diplomat-terrorist, arrested for plotting to bomb the June 2018 gathering of Iranians in Paris, was the Iranian regime’s third secretary in Vienna, Austria. He has been imprisoned in Belgium for the past 16 months,” said the NCRI in its statement.

A German court has approved the extradition of an #Iran regime diplomat to Belgium on a European arrest warrant for being part of a failed bomb plot targeting the Iranian opposition rally in Paris back in June.#ExpelIranDiplomatTerrorists pic.twitter.com/nJPBAuIHDT

“As you know, Assadollah Assadi, a third consular at the Iranian regime’s embassy in Vienna was arrested on July 1 in Germany based on a European arrest warrant,” Said Mr. Mohammad Mohaddessin chairman of the foreign affairs committee of the NCRI on August 8, 2018, in a press conference in Brussels.

In a report by the U.S State Department on October 17 titled “Iranian Regime Malign Activities During Negotiations With Iran and During JCPOA,” confirmed that MEK members were murdered in Camp Ashraf on September 1, 2013.

“On September 1, 2013, an attack by Iranian proxies Kata’ib Hezbollah (KH) and Asa’ib Ahl al-Haq (AAH) on Camp Ashraf in Iraq, led to the deaths of 50 members of the Mujahedeen-e Khalq, or MEK. Press reports claim members of the QF not only planned the attack but also played a direct combat role in it. The QF, along with KH and AAH members, also abducted seven MeK members and smuggled them back to Iran, according to the press. The missing seven members haven’t been seen or heard from since the attack,” the report said.

The massacre in Ashraf on September 1, 2013 was the hidden half of the regime’s retreat in the nuclear talks and the JCPOA#Iran #FreeIran pic.twitter.com/hieEjBHegK

Malekzadeh is from Saravan, in Sistan and Baluchistan Province (southeastern Iran). He was fired as the chief executive officer of Gheer Sabz (Green Tar) cooperative in Chabahar. The Intelligence Ministry assigned him to Malaysia, then to Muscat in Oman, and then to Turkey using the cover of Petropars Company.

In March 2018, two Iranian regime terrorists using the cover of journalists went from Turkey to Albania to bomb the MEK’s Nowruz celebrations but were arrested while photographing the location. In parallel to the dispatch of the regime’s agents and such former so-called MEK members as Alireza Naghashzadeh, several other members of the Turgut gang were also sent to Albania to carry out the attack.

According to Albania’s Police Chief, Turgut had been imprisoned in Albania in 2011 for smuggling a ton of Heroin but used a fake passport to escape. He has also been imprisoned in Azerbaijan and Turkey for drug smuggling.
Unable to contain popular uprisings and the growing activities of young people and Resistance Units, the Iranian regime had dispatched its agents to Albanian embassies in different countries in a futile and absurd attempt to demonize the MEK.

Whatever the regime’s ploys, as security services in Germany, the Netherlands and other European countries have stated, the MEK and the NCRI are the main targets of the demonization campaign, espionage, and terrorism by mullahs’ Intelligence Ministry and the Revolutionary Guards.

NCRI’s Committee on Security and Counterterrorism urges all Iranians in European countries to provide any information on the activities of the regime’s agents to the relevant law enforcement agencies.

In its April 29, 1997 declaration, the European Union stressed that the regime’s intelligence operatives must be expelled from Europe and that no visas should be issued for those Iranians linked to Iran’s intelligence and security services.

2. The MOIS and the IRGC must be included in the European Union’s terrorist list.

3. The mullahs’ embassies and representations, which in reality are terror and espionage centers must be shut down.