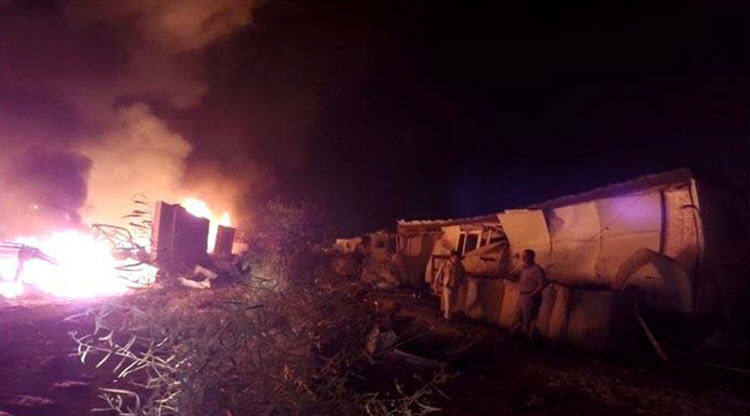 After a barrage of more than 50 rockets hit Camp Liberty on the night of 4 July, the British Parliamentary Committee for Iran Freedom (BPCIF) issued an immediate condemnation and an urgent call for international safeguards for the camp, home to Iran’s democratic opposition.

This was the fifth attack on Camp Liberty in four years. Militias affiliated with the Iranian regime again fired on Camp Liberty, located near Baghdad’s International Airport, setting large parts of the camp ablaze. Reports suggest that a number of rockets struck an area outside the camp.

A number of camp residents were injured, but, there are no reports of any fatalities.

The co-chair of the British MPs, Sir David Amess MP declared, “This rocket attack is a stark reminder of the threat against these defenceless refugees and make the case of an immediate international intervention to provide them with safety and security. The impunity for those responsible for today’s and previous deadly attacks on Camp Liberty must end and the international community must bring them to justice.”

The rocket attack, at 20.35 local time, comes on the eighth day of a blockade of Camp Liberty by Iraqi security forces. Soldiers have been preventing food, medicine and fuel from reaching the camp. The blockade continues.

The attack on Monday night was conducted by Iraqi forces co-operating closely with the Quds Force of the Islamic Revolutionary Guard Corps. The notorious Quds Force conducts terrorism on behalf of the Iranian regime.

The British Parliamentary Committee for Iran Freedom (BPCIF), foresaw Monday’s events: in two statements last year BPCIF warned of new efforts by Tehran to use its proxies in Iraq to attack Camp Liberty in an effort to eliminate its opposition. The statements called on the UK government to take urgent action with the EU, the U.S. and at the UN Security Council to secure adequate protection for these defenceless refugees.

Sir David Amess MP said tonight that the BPCIF was reiterating its earlier calls on the UK government to act in cooperation with its international partners, in particular the U.S., to ensure the camp residents are kept safe, both from attack and from the deprivation of the necessities of life, until such time they all leave Iraq for third countries.