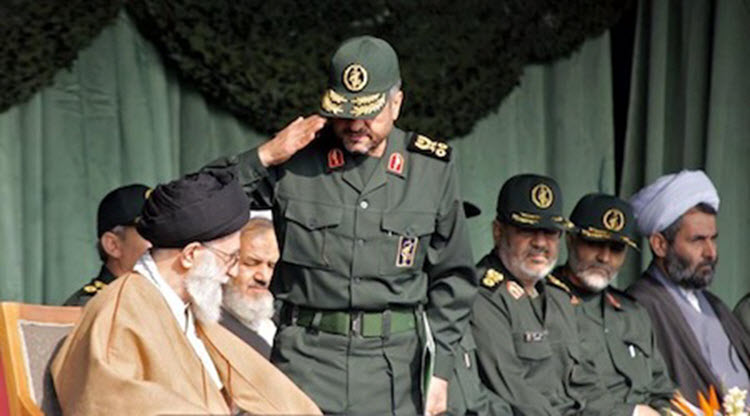 The international community was informed last week about the increasingly large and powerful commercial empire that is being controlled by Iran’s Revolutionary Guards Corps (IRGC). At a press conference, the main opposition to the Iranian regime, the National Council of Resistance of Iran (NCRI), also pointed out that the IRGC’s wealth is making a huge contribution to the ongoing terrorist activities by various groups throughout the Middle East.

Thanks to information obtained by the network of the People’s Mojahedin Organization of Iran (PMOI/MEK) network, (which has contacts in the country and even in the Iranian regime and the IRGC itself) we now know that there are around at least 90 docks around the coast of Iran that are controlled solely by the IRGC.

The Supreme Leader of Iran, Ali Khamenei, ensured that these docks would not be subject to controls or checks which means that the IRGC has complete freedom to smuggle goods into Iran on the black market.

However, what is more alarming is what is leaving the country. The IRGC has been arranging large shipments of weapons to its proxy groups abroad – in particular, Bahrain, Yemen and Syria. It has also been able to smuggle personnel and financial resources to its proxies, allowing the regime’s influence to spread further and further across the Middle East.

For almost four decades the Iranian regime has been focused on gaining wealth and power. These two vices are interconnected and spiralling out of control. The more wealth the IRGC has, the more terrorism it can support, and so it continues.

Reports suggest that the IRGC earns around €12 billion per year from its docks operations. This is just one of many sources of income for the IRGC, so the total wealth it has access to can only be imagined. As it owns many large industry and trade companies, it means that the IRGC is in control of more than 50 percent of the Iranian gross domestic product. It spends billions of dollars every year on funding, supporting and spreading terrorism.

The current president of the country, Hassan Rouhani, oddly described by the West as a “moderate”, has ensured that the IRGC increases its control over the economy and has allocated larger portions of the budget to it. Of the armed forces budget, almost 65 percent of it has been given to the IRGC.

It is clear that targeting the IRGC – curbing its activities and holding it accountable for the crimes it commits – will be a serious blow to the Iranian regime. It will have a crippling effect and the leadership of Iran will slowly crumble. On second thoughts, it may happen rather quickly. All that remains to do is for the international community to act in the name of preventing the IRGC from carrying out terrorist activities.