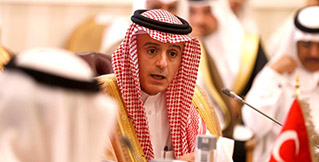 In an article on the English version of Al Arabiya’s website, it has been announced that the foreign ministers of the Gulf Cooperation Council (GCC) and their Turkish counterpart “Mevlut Cavusoglu” have urged Iran to stop its sectarian interferences in the region.

In a joint press conference with Cavusoglu following the GCC-Turkey ministerial meeting, Adel al-Jubeir, Saudi Arabia’s Foreign Minister, urged “Iran and Iraq to refrain from promoting sectarianism in the region”.

Al Arabiya say that a joint Turkish-GCC communique was issued after the meeting of ministers. It condemned “indiscriminate airstrikes on Syria’s Aleppo” and expressed “deep regrets” at the inability of the United Nations and the international community to stop the raids.

The GCC and Turkish foreign ministers met in Saudi Arabia’s capital Riyadh and where they reiterated “their complete rejection of the use of Iraqi territory as a safe haven for terrorist groups to carry out terror attacks including smuggling of weapons and explosives”.