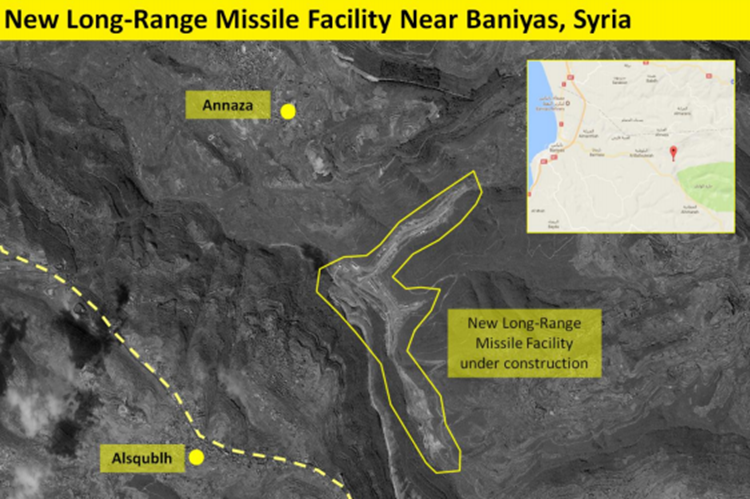 Reports that satellite images confirm that a new ballistic missile production complex is being built by Syria near the city of Baniyas. In August 2017, ImageSat International (iSi), a private satellite imagery and geospatial intelligence firm, published the images, along with its own analysis.

Based on the imagery, the company’s analysts concluded that the buildings were similar to structures seen in Iran, that are associated with the production of short range ballistic missiles, suggesting that Bashar Al Assad is actively working with the Iranian government. As well, this may be part of a larger regional effort by Iran to bolster its allies’ capacities, especially against Israel. Still, the exact extent of Iranian involvement as unclear.

The iSi’s report states, “According to ISI’s intelligence team, the site still under construction includes one entrance that leads to the road to the site. The site includes administration area, production area and storage area. The site also has an area that is apparently dedicated to the production of ammunition.”

Although iSi did not identify the exact location of the comparative sites in Iran, other analysis shows that they are located at the Parchin complex, the Iranian military’s secretive complex near Tehran. The specific parts of the facility that are similar to those in Syria are reported to be associated with the production of solid fuel Scud, Fateh 110, and Zelzal short-range ballistic missiles.

Eearthen berms surround many of the buildings, and this is most significant, as this sort of physical protection is usually associated with ammunition factories, and development of solid fuel rocket motors. They are designed to protect nearby structures from damage in the event of an accident.

A website, zamanalwsl.net, associated with the Syrian opposition groups, was the first to report on the new complex. On June 28, 2017, the activists said that sources informed them that Assad visited the missile factories earlier in the month, under the cover of visiting the families of his supporters in the area.

The Middle East Media Research Institute, said that the writers at zamanalwsl.net explained, according to a translation, “The sources mailed us aerial photographs of the area which show the facility, consisting of several buildings, and noted that it is under the direct supervision of the Iranians. It is a facility for developing and manufacturing long-range missiles, and the sources assess that it will be officially opened at the end of this year. The writers went on to say that during his visit to the facility, Assad held an extensive meeting with several ‘Iranian and Syrian experts,’ lasting about two hours.”

The Middle East Media Research Institute said it was unable independently verify any of the claims, but the imagery shows that the site near Baniyas is almost certainly a missile factory. Still, it’s unclear why Syria chose to construct the facility there now, and the nature of their cooperation with Iran.

Many believe that the Syrians may not have the existing production capacity to keep their arsenal of short range ballistic missiles steady, as some 90 percent of their original stockpile had been used by 2015.

Sources had also informed zamanalwsl.net that the construction was part of a larger plan to consolidate arms production, with regards to advanced weapons and weapons of mass destruction in areas with predominantly Alawite Shia Muslim populations, who are loyal to the Assad regime.

While Assad still has the support and relative safety of the Russian military, his regime remains in a questionable position. The civil conflict continues to drag on and has become progressively brutal, and Israel has been launching an increasing number of air strikes in Syria.

Russian forces maintain a strategic port facility in Tartus, and the bulk of Russia’s Hmeimim Air Base, which includes S-300 and S-400 long-range surface-to-air missiles and Pantsir-S1 short-to-medium range air defense systems, lies in Latakia. Baniyas is effectively half way between these two locations. A missile production complex there is protected from insurgents and preemptive strikes.

A cooperative missile factory in Syria would help Iran evade scrutiny from the international community, as well as sanctions on its advanced weapons programs. Iranian officials are under pressure to allow arms inspectors into Parchin to look for evidence of banned nuclear weapons work. However, Tehran has resisted, insisting that the site is related only to conventional military efforts and is therefore not covered by agreements like the Joint Comprehensive Plan of Action (JCPOA).

Nikki Haley, United States Ambassador to the United Nations, told Reuters in an interview published on Aug. 22, 2017, “If you look … at past Iranian behavior, what you’ve seen is there have been covert actions at military sites, at universities, things like that. There were already issues in those locations, so are they [the International Atomic Energy Agency] including that in what they look at to make sure that those issues no longer remain?”

Additionally, there was a massive explosion at Parchin in October 2014. Many believe it was the result of sabotage by Israeli or American intelligence services. Iranian General Hassan Tehrani Moghaddam, a top official in charge of ballistic missile developments, was killed during a similar “accident”, along with 17 other people, at another facility in 2011.

Moving missile production away from Iran would help conceal it, and protect it from unwanted attention. According to experts, Syria may have hosted similar sites in the past, such as a nuclear facility possibly linked to North Korea that Israel destroyed in an air strike in 2007.

Syria’s cooperation with Iran on ballistic missiles could lead to advancements in its own arsenals with relatively little investment on its part. It is also possible that the facilities in Syria may eventually move beyond producing only short-range designs. This would improve the Assad’s and Hezbollah’s deterrent capabilities against Israel.

Though he never followed through, Assad threatened Israel with a flurry of Scud missiles, if it didn’t stop attacking targets within Syrian territory last March.

“We are fully aware” of the missile factories, Israel’s Defense Minister, Avidgor Liberman, said at a briefing in Tel Aviv last July. “We know what needs to be done…”