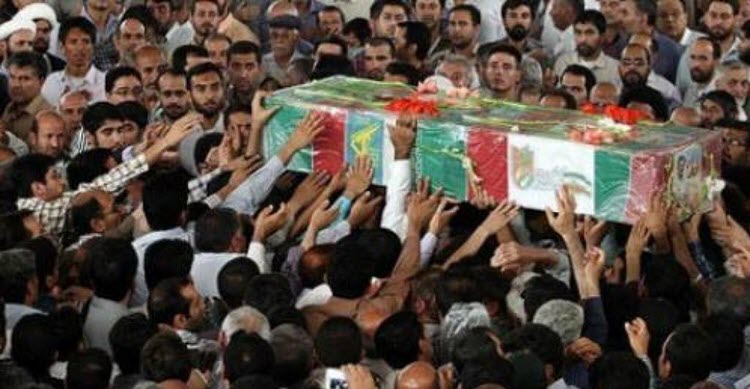 On November 30, the National Council of Resistance of Iran (NCRI) published a report about the loss of Revolutionary Guards forces (IRGC) in the Syrian War.

According to Tasnim News, November 22, Khamenei’s representative in ‘Martyrs and Veterans Affairs Foundation’, who is also Rouhani’s deputy, Seyyed Mohammad Ali Shahidi Mahallati, said that the  number of IRGC forces killed in the Syria war is more than one thousand. In a seminar on the occasion of “Bassij Week” he stressed: “Number of our country’s martyrs defending the holy shrine has exceeded one thousand and we owe all of them.”

As reported by the Iranian Resistance from inside the country, the number IRGC forces have lost, along with the Lebanese, Afghan, Pakistani, Iraqi and other mercenaries under its command, is more than ten thousand. Allegedly, the IRGC’s internal report says that in order to prevent the leaking of the extent of the casualties and negative social impact, corpses of most of Afghan, Pakistani and Iraqi mercenaries who are killed in Syria are not returned to Iran, and the corpses of Lebanese mercenaries are buried in Lebanon or Syria.

By examining the number of the IRGC’s commanders killed in the war, however, one can get an idea of the extent of casualties. The Security and Anti-terrorism Committee of the NCRI names 39 IRGC Brigadiers, 28 IRGC Colonels who, under Khamenei’s command, who were killed in Syria:

A wave of discontent flows through the victim’s families, and high casualties, along with IRGC attempts to dispatch young people, students, and workers to Syria has sparked hatred against this war in the Iranian people. The War in Syria is a reminder of eight-year war with Iraq.

The growing disgust shown by the public resulted in protests by some of the regime’s factions against the war in Syria. Mostafa Tajerzadeh writes, “We had an intervention in Syria full of loss with little profit… no country has had so much casualties in Syria as Iran…Despite the toll, we are accused of killing the Syrian people and pursuing sectarianism. Our credibility is damaged, and every day we go deeper into the Syrian quagmire.”

And on September 11, Mehdi Khazali said, “Wasn’t the eight-year war (with Iraq) enough, now we have been fighting in Syria for five years; it was a mistake and shouldn’t happen, and I have said this many times before…In fact the war has occurred and we are engaged in this quagmire, and we are engaged with the issue of ISIS which was created due to mismanagement of Haj Ghasem Soleimani. Hadn’t he done this, there wouldn’t have been ISIS…this is the mistake of Haj Ghasem Soleimani.”