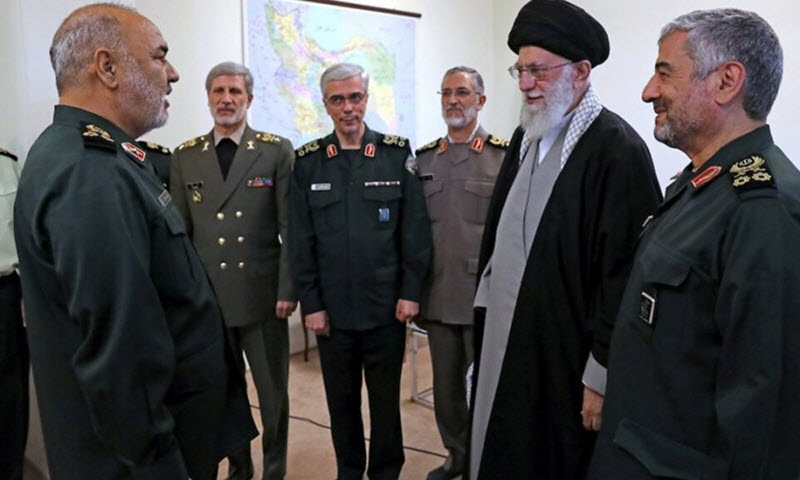 Iran’s Supreme Leader Ali Khamenei appointed Hossein Salami as the new head of the Islamic Revolutionary Guards Corps (IRGC) just days after the US designated the IRGC as a terror group.

Salami is often seen as a hardliner by the West, most notably for his mocking comments after taking US Marines hostage, and he certainly has characteristics and morals that are alien to all peace-loving people. However, it is important to note that no one in the Iranian Regime is a moderate and no one is a hardliner. They are all playing different parts of the same song with Khamenei as a conductor.

Since Salami’s appointment, which was designed to frighten the West and play into the myth that putting pressure on Iran would lead to the so-called hardliners taking over, the IRGC and other high-ranking officials have been heaping praise on him that is frankly sickening when you learn what he has done to people, including the Iranian people.

It hardly seems relevant that he shops for himself or can recite the Koran by heart, when you learn that he has routinely called for the destruction of Israel (even claiming that there are 100,000 missiles pointed at the Jewish State at any given time) or that he attacked the leaders of the 2009 Green Movement and was silent when former president Mahmoud Ahmadinejad did the same.

Many in the Iranian Regime see Salami’s appointment as a return to the Revolutionary ideals of the mullahs at the start of the Regime – although, there has definitely not been any mellowing in the Regime since 1979 – and believe that he will focus more on expanding the Iranian military than on politics and the economy. That’s easy considering all policy decisions come from Khamenei, so the IRGC never really had an independent voice, and the IRGC has already tanked the economy through decades of corruption.

It is also likely that Salami will use his position to appoint more young IRGC members and more so-called hardliners, who share his view on expanding Iran’s military and missile programs, reviving “revolutionary values”, and threatening the West.

However, the reality is that this will not scare the West. The US military alone is better funded, stronger, and has more members than the Iranian one and that doesn’t even take into account their NATO allies or US allies in the Middle East, like Saudi Arabia and Israel, who are also enemies of Iran. The Regime doesn’t stand a change and the IRGC will fail if they try to take the US on.