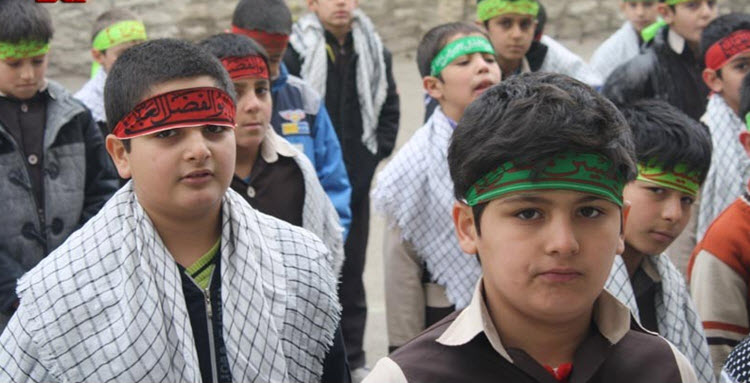 For the English version of Al Arabiya, Tony Duheaume wrote an article about the Basij Mostazafan – the “mobilisation of the oppressed”. He explained that it is an Iranian militia group that is highly loyal to the Iranian regime.

Basij forces are often seen on the streets of cities in Iran carrying out attacks with clubs and staves on innocent protesters. It also has snipers that will kill organisers of demonstrations.

The group comes under the Iranian Revolutionary Guard Corps (IRGC) who use the forces to carry out violent and horrific crimes against the Iranian people in acts of repression. Duheaume said that the IRGC prefers to keep its hands clean “as they have always looked upon themselves as the protectors of the people, and liked to be respected rather than reviled by their fellow Iranians”.

The Iranian people are often punished by the IRGC or those under it for what the regime calls “unspeakable” crimes. This could be speaking out against the repressive ruling in the country. They are often hanged in public.

Speaking about where it all started, Duheaume said: “In September 1980, at the start of the war, with Khomeini’s troops facing Saddam Hussein’s professional, well-armed military battalions, the situation looked dire for IRGC forces, and so to compensate for the weakness in the ranks of his military, the Supreme Leader needed to find a quick fix solution, and a suicidal band of zealots in the form of the Basij – seemed to be the perfect answer.”

The force is made up of young boys between the ages of 12 and 17 and middle-aged men who are not good enough to be in the normal military service. He said that in the early days of the Basij the child forces were very similar to Hitler Youth squads. “Soon after the Iranian revolution, with their brains filled with the glories of Khomeini’s recently founded Islamic Republic, the minds of the young Basij volunteers were brimming over with revolutionary zeal, and they were taught from the outset what an honor it was to die defending the fledgling Shia republic.”

The absolute devotion of the Basij to religious leader Ayatollah Khomeini was evident during the Iran/Iraq War. Minefields along the front line were a big obstacle for advancing Iranian troops. A quick and efficient way of eradicating this threat was needed. The “heavily indoctrinated” Basij forces carried out this extreme act of “insane martyrdom”. Duheaume said that “they were sent in their thousands to march across minefields laid by Iraqi troops, which were hampering the advance of the Iranian Revolutionary Guards Corps, and in droves these youngsters were blown to smithereens as soon as their feet came into contact with the mines, leaving a slimy mass of blood, bones and sinew coating the battlefield”.

Reports say that Khomeini bought 500,000 red plastic keys from Taiwan that the Basij members wore around their necks. Their commanders told them that the keys would let them in through the gates of paradise if they died in battle.

The massive death count of Basij members that cleared the mine fields was not a big deal to the Iranian regime. It was rather a “cost-effective way to clear mine fields” without putting the precious and highly-skilled IRGC troopers at risk.

“So this was the birth of the Basij, a militia contingent that revels in its past glories, and thinks nothing about sacrificing life on earth for their Supreme Leader. Even though suicide was against the teachings of the Quran, in the minds of these fanatical zealots, such sacrifice would take them through an open door straight into paradise.”