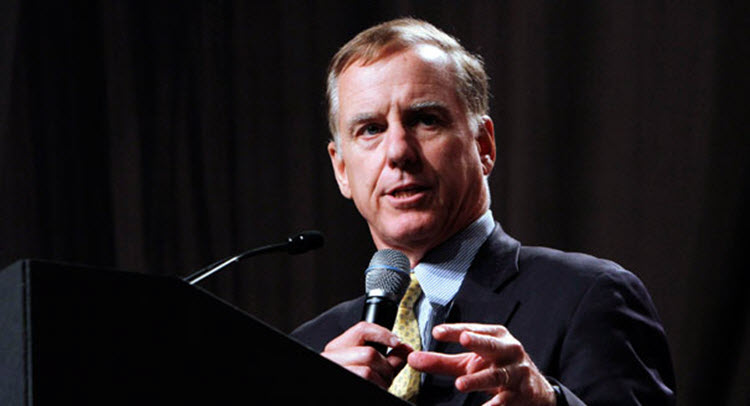 Dean, a former Vermont Governor, said that “Iran is the farthest thing from an Islamic Republic” and Iran is not “a Muslim country”, it is instead a republic that has been “hijacked by thugs and murderers”.

Speaking about the Iran nuclear agreement he said that although he was not opposed to it, the final deal was not a “good deal” – the regime got a lot more than they should have. The regime is the biggest state sponsor of terrorism and they are creating difficulty for US allies, he said. In a few years, he added, we will know whether the deal worked or not, and that result will contribute to Obama’s reputation as a good or “not-so-good” president.

Regarding Saudi Arabia’s presence at the event, the interviewer asked Dean if he believes that Saudi Arabia really is an ally of the US. Dean said that although he has his problems with the country, namely its disrespect for human rights, he does believe that they are true allies. He said they are a “key partner”.

The term “radical Islamic terrorism”, he said, is a term that he does not like. “I think it’s important for us not to crank up a religious war. That, of course, falls into the hands of Daesh. So I think to call it Islamic terrorism is really just more for political, domestic consumption in America rather than something that you’d want to do in the world. I think these people are thugs, and they’re murderers. I don’t give them a cause. I don’t believe — I think they’re crazy, I think they’re lunatics, pathetic lunatics.”

He emphasises that there is no religion, not a legitimate one, that would condone such behaviour. Iran uses religion to execute its people, but is a country that has been “hijacked by thugs and murderers”.

Questioned about what a Muslim country looks like, Dean said: “(…) there are nations where the people are overwhelmingly Muslims that don’t behave the way Iran does. I don’t consider Iran to be a Muslim country, because I don’t know Muslims who behave like that who I respect. And I think the vast majority of the billion Muslims in the world have no desire to live in Iran whatsoever because of the way their regime behaves.”

A full transcript of the interview can be read on Breitbart News’ website.