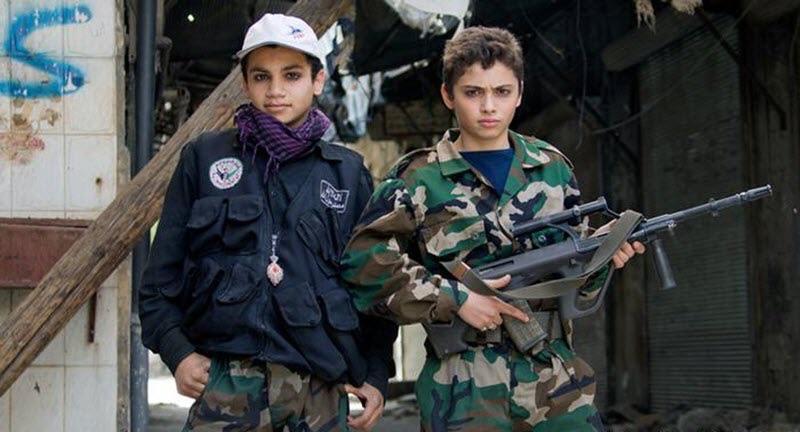 Iran should immediately end the practice of using child soldiers in the Syrian conflict, Human Rights Watch has said.

Iran can hardly claim that it must rely on children to fight, when it has maintained that its presence in Syria is limited, and advisory, HRW’s Iran Researcher Tara Sepehri Far wrote on 30 November on the human rights group’s website.

The following is the full text of the article:

“How old are you?” the interviewer asks.

“Thirteen,” replies the boy, in uniform.

“Thirteen years – thirteen years old!” the interviewer repeats, proudly, as the camera pans upward to the grinning, bearded faces of uniformed men, apparently Iranian soldiers, who pat their young recruit on the back.

On November 25, a video with the logo of the Islamic Republic of Iran Broadcasting (IRIB) agency circulated on Iranian websites and social media showing the boy in the Syrian border city of Abu Kamal. He said he was a “defender of the shrine,” the euphemism the Iranian government uses for fighters it sends to Syria and Iraq.

The boy, who says he is from Iran’s Mazandran province, speaks in Persian about his motivation to join Forces in Syria and his message to Iranians. The interview does not clarify his military role.

If authentic, this video suggests that despite recent denials from the Iranian Embassy in Kabul, Iran is violating the laws of war in its government’s recruitment of child soldiers, an abuse Human Rights Watch and media outlets have previously documented with the use of Afghan child soldiers as young as 15 by Iranian-backed Fatemiyoun forces in Syria. During the Iran-Iraq war in 1980s, Iran also used thousands of child soldiers as volunteer forces, fighting in the most dangerous combat situations with limited training.

Under customary international law, recruiting children under 15 is a war crime. The Optional Protocol to the Convention on the Rights of the Child sets 18 as the minimum age for recruitment or participation in hostilities. Iran has signed the Optional Protocol, but the parliament has yet to ratify it.

When confronted with evidence of child recruitment, officials and others fall back on a few unlawful justifications: they lack the capacity to screen out children who “volunteer,” or military necessity forces them to use children. And Iran can hardly claim that it must rely on children to fight, when it has maintained that its presence in Syria is limited, and advisory.

Iran is not the only participant in the Syrian conflict using child soldiers, but that is no excuse. Instead of glorifying their participation, Iran should immediately end this practice, ratify the Optional Protocol, and ensure children are protected against recruitment. No country should be proud if its children leave schools to hold weapons.