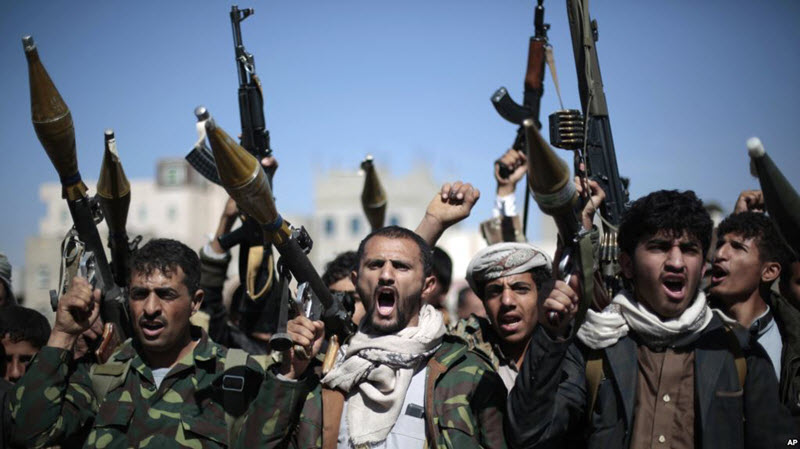 by Saeed
The Iran-backed Houthi militias are torturing and murdering prisoners in their jails and camps across Yemen, according to a former detainee who is calling on international human rights organizations to inspect the conditions.

Gamal Al-Maamri, a Yemeni activist who was released by the Houthi militias in a prisoner swap, held a press conference at the Yemen Embassy in Riyadh on Wednesday to speak out about his ordeal after being abducted and imprisoned in the National Security Bureau prison in Sanaa, in March 2015.
At the conference, organized by Yemen’s Ministry of Human Rights and the Ministry of Information in Riyadh, Al-Maamri even showed a shocking video of himself being tortured by the Houthis, which sparked anger and condemnation towards the terrorist group.

The torture paralysed Al-Maamri, who was imprisoned on false charges of espionage, but he told the conference that many prisoners had been tortured to death.
He said: “I was subjected to various types of systematic torture, until I was totally paralyzed with even my private parts badly damaged. The Houthis’ torture damaged the nerves of my left upper and lower limbs, which paralyzed the left side of my body.”

He also disclosed the conditions of foreign abductees, citing sleep deprivation as one of the most common methods of torture, before calling for international human rights organisations as well as the UN and the UN Security Council to step in to inspect the conditions that thousands of detainees are living under.
The Yemeni government, some of whom attended the press conference, said that the cases of those abducted by the Houthis were a top priority for their talks with the UN.
In attendance at the conference was Yemeni Minister of Human Rights Mohammed Askar, Minister of Information Muammar Al-Iryani, and Deputy Minister of Human Rights Maged Ali Fadail.
Of course, one important point that needs to be addressed is the role of the Iranian Regime who sponsor the Houthis in Yemen. It is clear that the Houthis could not survive without the Regime’s support and its torture chambers would therefore collapse.

The torture is also likely an Iranian import, as the tales shared by Al-Maamri echo those from Iranian dissidents, who have been imprisoned in Iran over the years.
Importantly, if the Iranian Regime was expelled from the region, the proxy cells that they promote would soon fall, allowing an end to the violence and the repression. That’s why the international community should send in its human rights monitors to Yemen and start supporting the Iranian people’s quest for a free Iran.