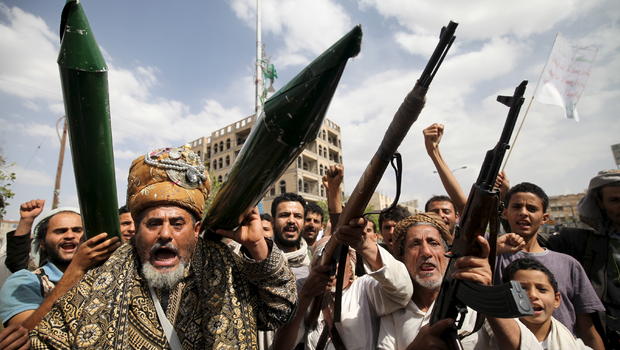 by Azita Carlson
The Saudi-led Arab coalition to defeat the Iran-backed Houthi militia in Yemen and restore the internationally recognized government has said that Iran is violating the UN arms embargo on the Houthis by attempting to supply them with advanced Iranian-built surface-to-air missile systems.
They say this could increase the air-defence threat to US allies in the region and weaken the chances for a peaceful resolution to the Yemeni crisis.

Originally, the Houthis has seized the Yemeni government’s missiles, but these were largely obsolete and didn’t do much damage. However, now that Iran is supplying them with newer missiles – some converted from Russian-made missiles – the destruction has increased significantly. It has resulted in more missiles fired at Saudi Arabia, specifically at civilian regions, and more damage to the Coalition forces.
Iran has always denied that it is supplying the Houthis with ballistic missiles in violation of two UN resolutions, but there is a lot of evidence to the contrary.

First, several different countries have uncovered shipments of Iranian-made weapons to the Houthis. The Arab Coalition have even seized Iranian-made electronic tracking systems, which track military and commercial aircraft, from the Houthis.
Second, the Arab Coalition said that the Houthis have no way to manufacture ballistic missiles internally.
Third, a panel of independent UN experts who were examining the fragments of missiles fired at Saudi Arabia by the Houthis in 2017, determined that these missiles were made in Iran and that Iran had violated the arms embargo.
Therefore, it seems obvious that Iran is supplying the Houthis with these missiles and should be stopped.
What does this mean for the US?

Well, the US is backing the Arab Coalition and taking a tough line on Iran for its regional aggression and support of terrorists. The US also wants peace in the region, something that is unlikely if the Houthis think that Iranian-made weapons can help them fight the Coalition.

Farzin Nadimi, a Washington-based analyst specializing in the security and defense affairs of Iran and the Persian Gulf region, and Michael Knights, a Boston-based Lafer fellow of The Washington Institute, specializing in the military and security affairs of Iran, advised that the US should:
•increase defensive support to the Coalition
•prioritize emission control technology to reduce the chances of Iran-Houthi radar picking up on coalition planes
•work with countries in the region to stop Iran’s illicit shipments to Yemen
Nadimi and Knights wrote: “For its part, the coalition should promptly share all weapons discoveries with the UN and nongovernmental arms-control organizations, who can help confirm its findings. Such efforts would not supplant the equally urgent quest for a sustainable end to the bloody conflict—in fact, they may be prerequisites to a settlement.”