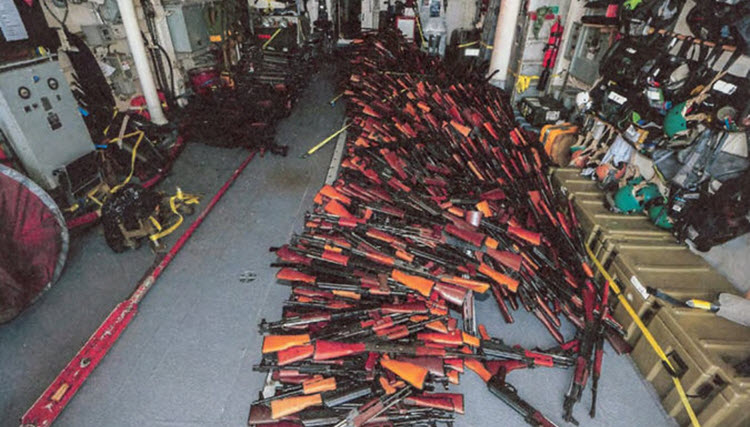 The Australian government recently released photographs of weapons that were seized from a vessel near the coast of Yemen during an attempt to smuggle them into the country. It appears that the weapons were manufactured in Iran. This is consistent with other reports that indicate Iran has played a part in gunrunning operations in the area.

Thousands of weapons were seized by the ‘Darwin’ and in the photographs there were around nine rocket-propelled grenade launchers. They were seized last February from an Iranian dhow named ‘Samer’. The hidden cargo on the Samer included enough weapons to arm a powerful ground force – nearly two thousand Kalashnikov assault rifles, almost 50 PK machine guns, 41 spare machine-gun barrels and two dozen 60-millimeter mortar tubes.

The Small Arms Survey, an international research centre based in Geneva, were finally able to get hold of the photos after long discussions with the Australian military.

Analyst Matthew Schroeder said that the characteristics of the weapons, as well as the factory markings, are a match to rocket-propelled grenade launchers previously made in Iran, documented in Iraq and on the Ivory Coast. He said: “(…) the seizure appears to be yet another example of Iranian weapons being shipped abroad despite longstanding U.N. restrictions on arms transfers from Iran.” Iran has been banned from exporting arms under numerous international sanctions, however the U.S. has claimed on several occasions that Iran has been violating these sanctions in their support for proxy forces involved in conflicts in Palestine, Iraq, Yemen and Syria.

Conflict Armament Research, a private arms consultancy, compiled a report last year concluding that the evidence available to them indicates the likelihood that the weapons were made in Iran.

This is not the first time an Iranian dhow has been stopped. Between September 2015 and March 2016 four Iranian vessels were stopped. In total, these raids collected over 80 antitank guided missiles, 5,000 Kalashnikov and sniper rifles and approximately 300 RPG launchers.

Commander of the Navy’s Fifth Fleet, Vice Adm. Kevin M. Donegan, said that Iran has been trying to smuggle weapons to the Houthis and believes that there are more vessels that have not been stopped. He said that the captains in charge of the vessels are often unemployed fisherman, emphasising that they are not necessarily workers of the Iranian regime.